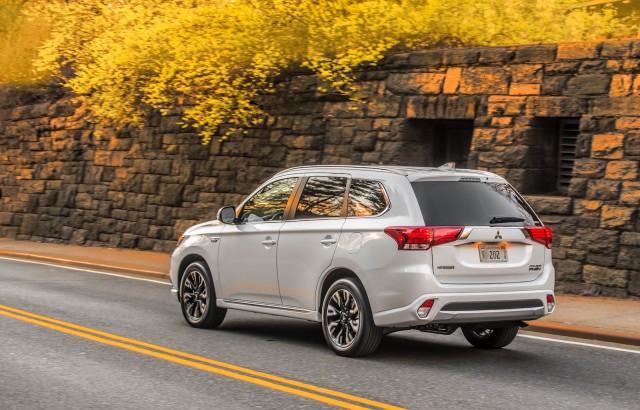 Mitsubishi dealers in the United States and Canada won't have the brand's first plug-in hybrid in their showrooms by the end of this year after all, the automaker said today. Instead, they'll have to wait at least another year for the much-delayed, high-efficiency vehicle.

“Following a thorough evaluation process, we have determined that, in order to meet a level of competitiveness that will exceed customer expectations in the United States, the launch of the Outlander PHEV will be delayed until the summer of 2017,” Mitsubishi spokesman Alex Fedorak told HybridCars.com.

That more than likely means that the Outlander PHEV will arrive here as a 2018.

The Outlander PHEV, or Plug-In Hybrid Electric Vehicle, arrived in Japan all the way back in 2013 and has been on sale in Europe nearly as long. At the New York International Auto Show back in March of this year, Mitsubishi took the wraps off of the American market Outlander PHEV and promised it would be in showrooms by this fall.
Despite its delay arriving in North America, where it would be the first non-luxury plug-in hybrid SUV or crossover, the Outlander PHEV has been a surprising hit for the three diamond brand in Europe. Sales of the non-hybrid Outlander were up nearly 90 percent last month in the U.S.