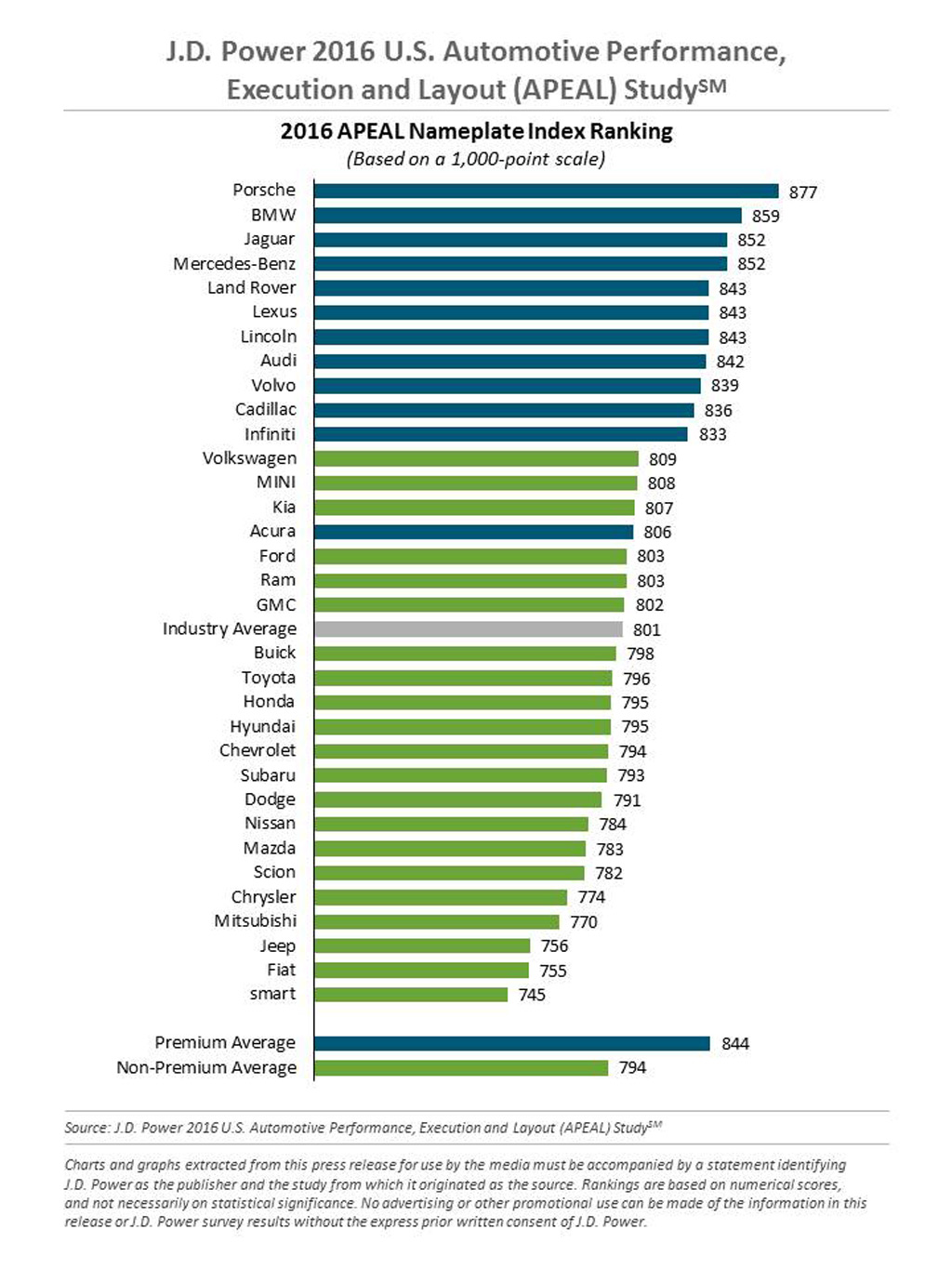 Some of us own cars that are functional, but little more. They get us from Point A to Point B, they haul our groceries and kids and dry cleaning, but they don't really stand out. They don't create an emotional connection.

Others are luckier. They drive cars that inspire passion, loyalty, and pride. They tell their friends about those cars, encourage their co-workers to check them out when they're looking for new rides.

J.D. Power's Automotive Performance, Execution and Layout (APEAL) Study reveals which car brands generate that kind of excitement. It "measures owners’ emotional attachment and level of excitement across 77 attributes, ranging from the power they feel when they step on the gas to the sense of comfort and luxury they feel when climbing into the driver’s seat." Scoring is done on a 1,000-point scale.

Power just released the results of its 2016 study, which was based on questionnaires answered by more than 80,000 people who'd bought or leased 2016 model-year vehicles. Repondents were polled between February and May of this year, after they'd owned their cars for 90 days.

The APEAL study is especially important to automakers, because it shows them exactly what sorts of features today's consumers prize. This year, cars with safety-oriented, driver-assist technologies fared significantly better than those without,  though other bells and whistles resonated with owners, too. Here are a few of the 2016 APEAL study's big takeaways:

Blind-spot monitoring is a big plus for car owners. Cars equipped with the technology earned average APEAL scores of 821, while those without it averaged 787.

Collision avoidance is popular, too: Vehicles with it received average scores of 828, but those without it earned scores around 790.

Fuel economy remains a big hit: Satisfaction with new-car fuel efficiency climbed 14 points in this year's study. That's notable, because with today's low gas prices and booming SUV sales, it's easy to think that consumers aren't as focused on fuel economy as they were when prices were higher.

On the other hand, consumers aren't happy with new transmissions: Thanks to broader rollouts of eight-speed and nine-speed automatic transmissions, scores related to smoothness of shifting fell by one point.

Navigation systems have plenty of room for improvement: Two of Power's lowest-rated categories involved the usefulness of navigation systems and the ease of using them. Power's Renee Stephens notes that making these systems intuitive requires simplifying and future-proofing them:

"As automakers continue to add more content, including advanced technologies, to their vehicles, one key way to maintain appeal is to design technology that is easily upgradable and intuitive. Intuitive designs never go out of style. For example, for infotainment systems, intuitive design may mean simplification: bigger buttons, bigger screens and menus that are laid out in a manner that is easy for the driver to understand."

Automakers are deepening our emotional attachment to new cars: Thanks in part to 30 new or redesigned models, the average APEAL score among all vehicles ticked up from 798 in 2015 to 801 this year. Power notes that over the past decade, new vehicles have earned APEAL scores 29 points higher than other vehicles in the same segment.

Germans generate most APEAL with luxury and mass-market shoppers: The top-scoring brand in the 2016 APEAL study was Porsche (not surprising, since it's held the same spot for the past 11 years). Its score of 877 was significantly higher than the #2 luxury finisher, BMW, at 859. Mercedes-Benz and Jaguar tied for third place in the luxury category, with scores of 852.

Among mass-market cars, Volkswagen came out on top, with a score of 809, followed closely by BMW's MINI brand at 808.

Lincoln was the highest-ranked U.S. luxury brand, earning a score of 843. Its sibling, Ford, earned the top mass-market score among U.S. brands, with an 803.

Acura, FCA need work: As you can see from the rankings above, most luxury brands outperformed even the highest-ranked mass-market brand. The lone exception was Acura, which earned a score of 806--well below the luxury average of 844. Consumers were happier with cars from Volkswagen, MINI, and Kia than they were with Acuras.

At the bottom of the mass-market list, we find Daimler's typically poor-performing Smart, which earned a score of just 745. Faring only slightly better were three of Fiat Chrysler's five brands: Fiat (755), Jeep (756), and Chrysler (774), with Mitsubishi sandwiched in at 770. Ram was the only FCA brand to score above the mass-market average of 794.

If you've purchased a 2016 model-year car, truck, or SUV, do these scores match your own opinions of your new ride? Share your thoughts in the comments below.