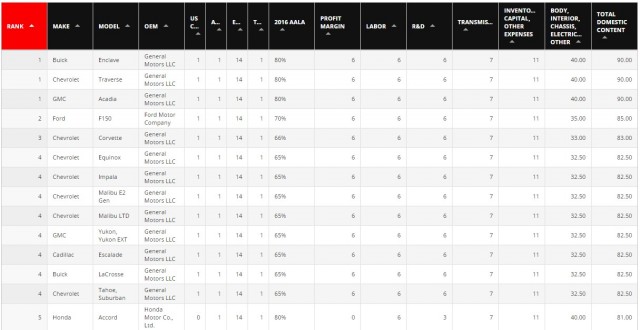 When shopping for a new ride, many car-buyers fixate on one or two things--important things like fuel economy or reliability. But some go a step further and consider an automaker's business practices.

If you're in that latter group, and if owning a car that's "made in America" matters to you, the Made In America Auto Index will come in very handy.

The Index is updated every year by the Kogod School of Business at American University in Washington, D.C. It doesn't just assess how many components of a car, truck, or SUV were made in the U.S., it considers the model's broader economic impact.  Or, in Kogod's own words, "What percentage of your vehicle’s value contributes to the overall well-being of the U.S. economy? How does your car impact the U.S. automobile industry’s economic vitality?"

For the 2016 version of the Index, Kogod scored cars, trucks, and SUVs based on seven criteria:

1. Profit Margin. Kogod assumes that automakers earn six percent profit on new cars and that those profits remain in the country where the automaker is headquartered. For the Made in America Auto Index, companies with their global headquarters in the U.S. receive six points. Those headquartered elsewhere receive no points.

2. Labor. As with profit margin, labor is an all-or-nothing category. If a model is assembled in the U.S., it earns six points. If not, it receives no points.

4. Inventory, Capital and other expenses: This is another all-or-nothing category: models assembled here receive 11 points, those assembled outside the U.S. receive a score of zero.

5. Engine: The engine is a key component in most cars (electric vehicles excepted), and as a result, it has a big economic impact--on your wallet, on an automaker's profit margin, and on the auto industry's health. If a model's engine is produced in the US, Kogod gives it a score of 14. If it's not, it gets no points.

7. Body, Chassis, and Electrical Components: These items make up the bulk of a model's cost and have a correspondingly massive economic impact. That's why Kogod assigns 50 percent of a model's score to this category, based on the data provided by the American Automotive Labeling Act. Basically, Kogod takes the percentage of American content and halves it, making for a possible maximum of 50 points.

As you might imagine, U.S. automakers have a big advantage in Kogod's rankings, but even among Detroit brands, General Motors handily dominated the competition this year. The 2016 Buick Enclave, Chevrolet Traverse, and GMC Acadia tied for the #1 spot, and apart from the Ford F-150 (#2) and the Honda Accord (#5), 12 of the top 14 models were from GM.

At the other end of the chart, there's a massive pile-up of foreign models. Tied for the #75 spot, with just one point each, are models from Audi, Honda, Infiniti, Kia, Lexus, Mazda, Mercedes-Benz, Mitsubishi, Scion, Smart, Subaru, and Toyota.

If you're a data fan and you've got a bit of time on your hands, we suggest taking a long look at Kogod's 2016 rankings. The volume of information is stunning as always, and there are several surprises hidden in the stats.