BMW i3 batteries will become energy storage systems for the home 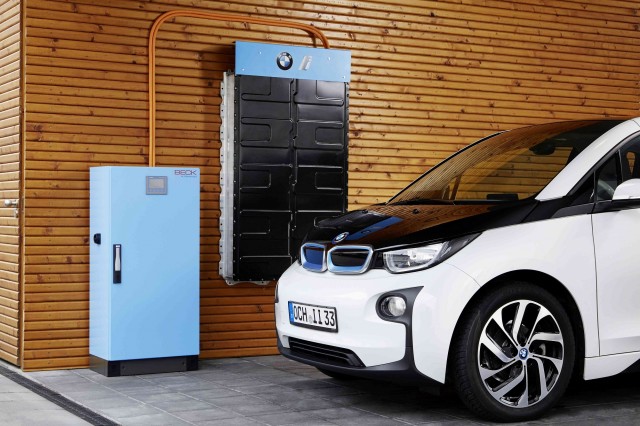 First, there was the Powerwall, the wall-mounted battery from Tesla Motors designed to store electricity generated by solar panels and help consumers escape the grid. Sensing the start of a trend, Mercedes-Benz and Nissan followed suit, offering sleek-looking batteries that double as energy storage solutions and conversation pieces.

Now comes word that BMW will offer a home battery of its own -- and its green credentials could make it especially popular with eco-friendly consumers.

Speaking today at the Electric Vehicle Symposium & Exhibition in Montreal, Quebec, the BMW i division announced that it is working with Beck Automation to give old lithium-ion batteries from the BMW i3 a second life. When a car's battery pack is replaced, consumers will be able to transfer the batteries to a charging module designed by Beck. (Sold separately, obviously.) The BMW- and Beck-branded system will store electricity that homeowners and business-owners can use to power computers, water-heaters, or, of course, their BMW i3s.

It's an interesting variation on Tesla's Powerwall, which is purpose-built from new batteries. Nissan's xStorage system uses recycled Leaf batteries, but it appears that Nissan will repurchase those batteries and repackage them itself. BMW's DIY, unplug-and-play approach to the issue of home energy storage is novel and might be very attractive to the sorts of green-minded consumers who purchase battery-electric vehicles. (BMW says that the system will accommodate brand-new batteries, too.)

Above, you'll see an image of the BMW/Beck system installed. Clearly, it's not as pretty as a Powerwall, but it should be just as functional. And of course, the design could change by the time it goes into production. The oldest BMW i3s are only three years old, and the system isn't expected to go on sale to consumers until 2017 at the earliest.