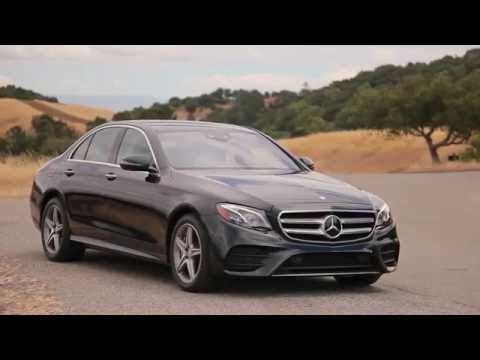 It can steer for you, brake for you, it can even entertain you. Is the 2017 Mercedes-Benz E-Class the smartest car on the road today?

By Mercedes' reckoning, it is. As a rival for vehicles like the Audi A6, BMW 5-Series, Cadillac CTS, Lexus GS, and Jaguar XF, the E-Class has its plate full just competing on virtues like interior comfort, fuel efficiency, and ride and handling.

It's still a benchmark in that respect, now that's it's been completely revamped and restyled along the lines of the latest C-Class and S-Class sedans.

Where it goes the extra mile, is its full-on vault into the future of driving. Like the Tesla Model S, the new E-Class takes a big step toward piloted driving by knitting together sensors, cameras, and cruise control to give it an astonishing level of automation.

That's not to say autonomous: though it's on the spectrum of self-driving cars, the 2017 E-Class still requires a steady hand on the wheel, even if it's only once in a while.

It is more advanced than even the range-topping S-Class, and it's a big milestone on the road to the cars of the future.

First things first. Before technology take the stage, it's worth taking a look at how different the E-Class has become.

With this complete redesign, the E-Class has become more beautiful than it's been in a few generations. It’s an echo of the smaller C-Class that remains one of our highest-rated cars, but because the same themes play out on a longer wheelbase, the long-hood, short-trunk proportions seem to work even better.

The E-Class just looks more substantial and more elegant. In part, that's due to the deep shoulder line that tapers the body and dips toward the rear wheels ahead of LED-ribbed taillights. Those lights have what Mercedes calls a stardust effect: a handsome, glittery finish that scatters and diffuses the light into a soft glow.

There are a few differences among the many versions of the new E-Class. Luxury versions come with an upright star on the hood. Sport versions like this one get that big logo embedded in the grille.

The cockpit is flat-out stunning. Like the other new Mercedes sedans, it wraps the passengers in sweeping touches of wood and metallic trim, studs that with cool round vents, and flaunts big, high-resolution screens for gauges and infotainment.

Among the highlights are a stitched leather cap to the dash, and warm ambient lighting on some models. It looks best when it's set to soft white, warm gold, or cool blue; the ambiance goes a little more prom-night limo when it's set to purple.

Technology makes a huge advance just in cockpit placement. The E-Class has a wide 12.3-inch screen as its standard infotainment display; most models can be ordered with a second identical display that replaces the gauge cluster. They're both controlled by either a set of tap-and-swipe pads on the steering wheel, or by the touchpad and roller controller on the center console.

With grippy front sport seats and a back seat with almost 2 inches more space, the E-Class is a big sedan that doesn’t scrimp on interior space. The front buckets can be fitted with variable lumbar and massaging controls as well as ventilation, and a new package of fittings for driver and passenger warms the armrests and center console, as well as the steering wheel.

The rear seats have a middle-section split that offers a storage armrest with its own cupholders, and can be fitted with a tablet holder; there's almost enough room for adults to cross a leg over a knee.

The power of four

For now, all E-Class sedans are E300s, and that means a 2.0-liter turbo-4 with 241 horsepower, hooked up with a 9-speed automatic, and a choice of rear- or all-wheel drive.

The inline-4 has all the thrust you’ll need in a mainstream luxury sedan, with 0-60 mph times of about 6.2 seconds. The only letdowns are sometimes gruff sounds from the engine bay, and some hunting as the transmission chooses from all those gears.

Over the next few years, we're due to get an E43 AMG, and an E63 AMG seems like a sure bet. Less certain are a turbodiesel version, and a plug-in hybrid, both of which aren't likely until at least the end of the decade.

From cruiser to crusher

Base E-Class sedans come with a multi-link suspension front and rear, fitted with adaptive dampers. A Sport version of this setup is offered, with a lower ride height and slightly stiffer tune.

The E300 4Matic you'll more likely see on the road is fitted with the available air suspension and adaptive dampers. It's the ideal setup for drivers that encounter all kinds of road surfaces, since it's capable of adjusting to meet them in a few milliseconds.

Place it in Comfort mode, and the E300 can float along in the old-school way, with lots of suspension travel, creamy transmission shifts, and a slow and progressive throttle. We’d dial it into Sport for most everyday driving, to filter off some of the big-car bounding--though in this mode it still has so much compliance, it's like the softest mode in a CTS.

By the time it’s set to Sport+, the E-Class takes its stiffest set, and feels just a few ticks away from AMG tune.

On the self-driving spectrum

Many drivers might consider the Tesla Model S the most advanced car on sale today, whether it's because of its plug-in powertrain or its heavy dose of driver assistance technology. The Model S can steer, brake, and slow itself to adapt to driving conditions. Unfortunately, the boundaries of piloted driving and safety are still being mapped out.

In the case of the new E-Class, the supplementary driver-assist systems come with caveats and safety backstops. I spent a long weekend in the Bay Area trying all of them out, and can agree with the claim that this is one of the most tech-forward vehicles you can buy.

For example, the E-Class can park and unpark itself from tight spaces. For those who still do it themselves—Luddites—the E-Class’s surround-view cameras keep an eye on every corner of the car, for a ding-free existence. Both of these came in handy trying to find legal spaces at Blue Bottle.

Not all the of the systems work universally, and that's mostly intentional. The E-Class' adaptive cruise control can now follow, stop, and accelerate to follow a car ahead at speeds of up to 130 mph; the so-called Drive Pilot is claimed to do a better job of following the road ahead even when lanes aren't clearly marked, at speeds of up to 81 mph. Mercedes requires drivers to touch the wheel at regular intervals, which should mean more attentive driving than with similar systems.

The E300 also can execute lane changes with just a tap of the stalk by the driver. It can even clamp on the brakes if it senses an oncoming vehicle is crossing the line.

Those conveniences come with an asterisk. The lane-change assist operated flawlessly, but Drive Pilot lost its sense of true in a couple of instances on the 101 freeway, where taping and striping was almost obliterated from wear. In another instance, outside Palo Alto, the well-marked yellow and white lines on the road went undetected, and the E300 drifted into an empty lane to the right. At one point, the system would not engage; cleaning off sensors mounted around the car's bumpers allowed it to re-engage.

In the longer view, the prospect of all these driving assists turn into first-world problems. Will drivers want to reach up and hold the wheel every 20 to 30 seconds, just to get brief relief while the car takes the wheel? Is that a convenience, or a new inconvenience?

The conveniences that make the most sense, end up simplifying daily interactions with the car. The inclusion of Apple CarPlay is a no-brainer--it's a clean, usable interface that's very good at taking voice messages and translating them to SMS. The Benz-designed infotainment systems, particularly navigation, are just too complex to program after a dose of Apple design.

Touchpads on the steering wheel and console respond to swipe controls, and it’s all rendered on lovely, crisp screens. There’s available wireless charging, too.

Finally, the new E-Class comes with a choice of high-end Burmester sound systems, both of which use some structural members of the body as passive speakers. The more expensive sound system has 23 speakers and 3D sound staging. It's one of the best audio setups we've heard in a current vehicle.

What’s the bottom line with the 2017 Mercedes E-Class? It’s about time someone made a car as smart—or smarter—than most drivers, but even the most brilliant cars still need a capable driver at the helm.