GMC teases next 2017 Sierra 2500HD, but what lies beneath its new hood scoop? 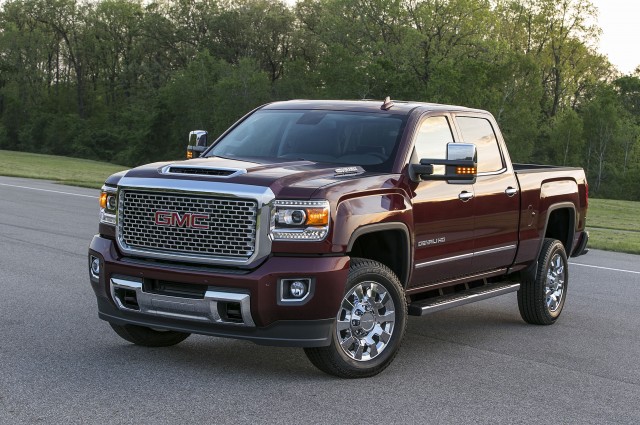 Here's what we don't know about the 2017 GMC Sierra 2500HD: What's under its hood. What we do know, however, is what that hood will look like.

For the first time, a big, chrome hood scoop occupies center stage above the truck's signature (and massive) chrome grille. You can't miss it.

Look beyond the scoop and you'll see a new, larger, and chromier (noticing a theme yet?) Duramax badge, indicating the presence of a diesel engine—a new Duramax diesel engine, that is. However, we'll have to wait for GMC to release more details before we can speculate beyond assuming that General Motors will give Ram's class-leading 900 pound-feet of torque a serious run for the money.

One thing that GMC has confirmed is that the hood scoop is actually functional, meaning it will supply the Duramax diesel with fresh, cold air. Functional hood scoops are a rarity, especially in the world of pickup trucks. In the truck industry, the only brand to have consistently stuck with a hood scoop has been Toyota, but even the bit grafted on to the current Tacoma isn't actually functional.

Look for the hood scoop and the latest Duramax to also make an appearance in the 2017 Chevrolet Silverado Heavy Duty as well.