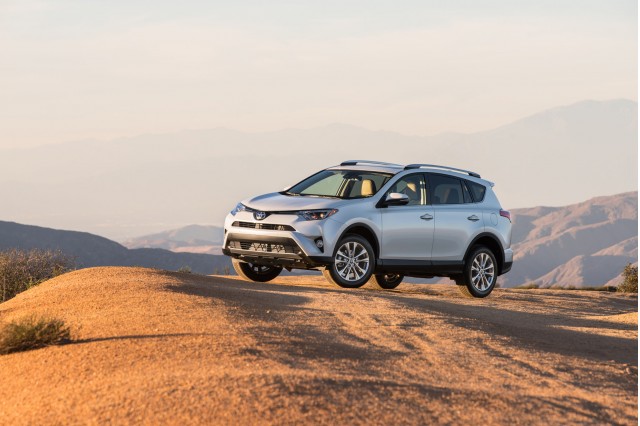 Small crossover SUVs continue to fly off dealer lots these days, supplanting mid-size sedans and larger SUVs alike thanks to their combination of a high seating position, all-weather capability, and additional cargo room. The Toyota RAV4 is one of the top sellers in its class, while the Hyundai Santa Fe Sport is a newer entry that rates well.

The latest RAV4 is solidly a compact crossover SUV, with available all-wheel drive and dimensions that stack up right along with the Honda CR-V and Ford Escape, its chief rivals. The Santa Fe Sport sits between the smart new Tucson at the small end, and the big Santa Fe three-row utility vehicle above it. Both aim at the heart of the small-SUV segment.

The RAV4 banks on longevity and better model recognition—plus the Toyota reputation for quality—and a new hybrid version last year. But the Santa Fe Sport outscores it in our ratings, so buyers should assess which of the two is best suited to their needs and preferences.

MORE: Read our latest reviews of the 2017 Toyota RAV4 and the 2017 Hyundai Santa Fe Sport

Both vehicles are variations on the tall SUV/wagon form, but the Toyota RAV4 is blunter and has some abrupt styling touches, while the Hyundai offers gentler and more fluid curves. The RAV4 plays it safe, with a profile that blends in alongside other affordable compact small crossovers. Up close, it’s far from inspiring, although a refresh for the 2016 model year fine-tuned some details and added more soft-touch surfaces inside. For 2017, the RAV4 offers a new range-topping Platinum trim level.

The Hyundai Santa Fe Sport offers an attractive shape that looks modern and grown-up, compared to the vehicle it replaced for 2013. Its sharp edges and tight creases wrap around the glassy wagon body in interesting ways, and a restyled front end for 2017 presents a handsome hexagonal face. The interior sets a higher bar too, with a central shield-shaped control panel surrounded by fluid curves and some gently swooping line. The two-tone trim is particularly nice. 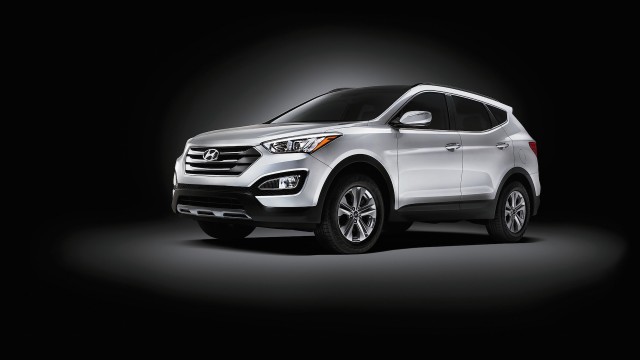 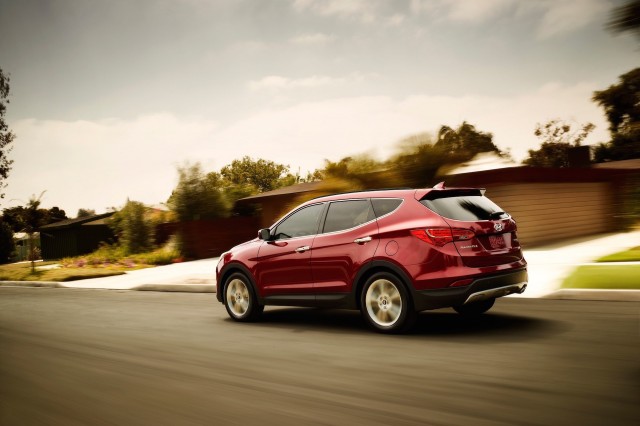 The RAV4 does fine with its base 176-horsepower, 2.5-liter 4-cylinder engine; a new Hybrid version has 190 net horsepower, a 33-mpg combined EPA rating, and more responsive feel. Four-wheel drive is an option, and there’s even a 4WD Lock mode for predictable traction in snow or mud.

The Santa Fe Sport offers either a conventional 190-hp 4-cylinder engine, or a turbocharged 2.0-liter inline-4 with 264 hp. The turbo gives very capable acceleration on the highway while losing only 2 mpg in highway fuel efficiency. Both engines are paired with a nicely-sorted 6-speed automatic transmission, with front- and all-wheel drive configurations available.

Neither SUV is anywhere near as sporty as the Mazda CX-5, and both prioritize ride over roadholding. The RAV4 is predictable and responsive, but hardly sporty, and it can feel a little short on acceleration. The electric power steering is nicely weighted and provides a good sense of center. In SE trim, Toyota's RAV4 gets a slightly stiffer suspension tune that lets it handle like a more nimble sedan. The 17-inch tires on LE and XLE versions will give a better ride than the larger optional wheels.

The Santa Fe Sport drives smoothly and requires little effort. Its powertrains are muted well, though sometimes the transmission gets caught napping when gear changes are needed. Ride quality may be the Santa Fe Sport's single best feature—it's almost always calm and collected. You can ignore the Comfort

Inside, the base RAV4's seats are less supportive than the firmer bolsters offered in the XLE version. Seating space is about on par with the equally large Honda CR-V—and more generous than that of the Ford Escape. But the back bench is less supportive than many adults will prefer, and its flip/fold mechanism isn't as good as Honda's. Cargo space is cavernous. 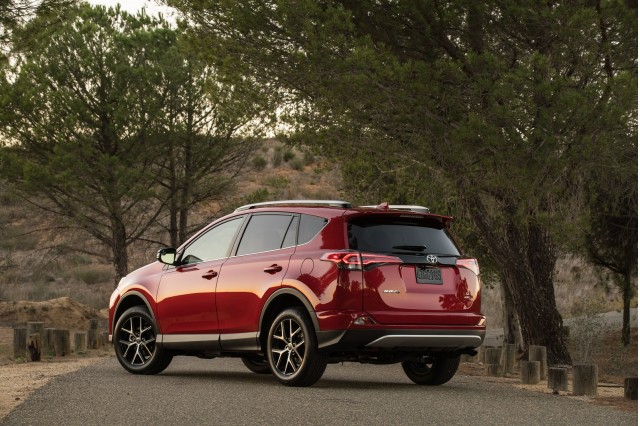 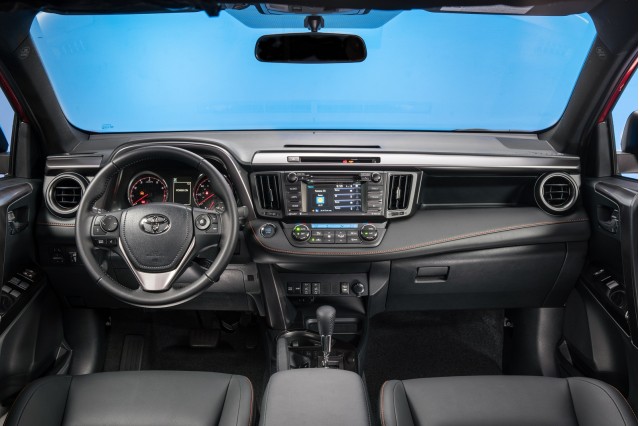 The front seats in the Santa Fe Sport are better than previous Hyundai seats, with good bottom-cushion support. On some models, the second row both slides almost 5 inches forward or back, and its 40/20/40-split seat-back reclines. There's also some storage space below the cargo floor.

Provided you don't need the convenience of a third row, it's a trade-off between these two in interior usability. Both have reasonably spacious back seats, though they aren’t as comfortable as those of a mid-size sedan. Each makes some compromises in contouring and support in the name of flat folding for expanded cargo space.

As for safety, the RAV4 is strong. It earns five stars overall from the NHTSA along with a Top Safety Pick+ award from the IIHS. While earlier model years of the Santa Fe Sport received only a "Marginal' rating on the IIHS small-offset front crash test, the updated 2017 Hyundai now fully matches the RAV4, with the same five-star NHTSA score and "Good" ratings on every IIHS test. Both SUVs get the same Top Safety Pick+ designation. Outward visibility in either of these models isn’t ideal, however, but there's little to choose between the two on safety.

But one big boon to the RAV4 is that it now includes as standard automatic emergency braking, adaptive cruise control, and lane departure warning.

It's neck-and-neck. We rated the 2017 Toyota RAV4 at 7.3 out of 10, and the Hyundai Santa Fe Sport at 7.3 as well. The Hyundai does better in styling, performance, and available features and options, and equals the RAV4 in comfort, safety, and fuel economy. (Read more about how we rate cars.)

The RAV4 does have that unbeatable Toyota reputation for quality, and its Hybrid version delivers the best fuel-economy ratings among all versions of either car. The Hyundai counters with a 10-year powertrain warranty. Either one could be an excellent choice, so we suggest that buyers drive them back to back before making a decision.

7.5
Expert Rating
The restyled 2017 Hyundai Santa Fe Sport looks sharp, inside and out. We can't help but wonder what the model could do with a slightly improved powertrain lineup.
7.3
Expert Rating
There's a RAV4 for just about everyone, and while we applaud Toyota for adding more safety technology for 2017, the competition is worth a good look, too.

6.0
Expert Rating
With V-6 power and predictable handling, the Santa Fe is a reasonable performer.
Read More
6.0
Expert Rating
Though the RAV4 rides well, it is neither the most composed small crossover nor the sportiest.
Read More

9.0
Expert Rating
It's Hyundai's biggest SUV, but the Santa Fe is smaller than some of its rivals.
Read More
7.0
Expert Rating
Some big upgrades last year improved the RAV4's interior, and it remains particularly well-packaged for real-world use.
Read More

9.0
Expert Rating
Federal testers and the IIHS agree: the 2017 Hyundai Santa Fe is among the safest crossovers on the road.
Read More
9.0
Expert Rating
Toyota added lots of safety features to the RAV4 for 2017, improving an already highly rated crossover
Read More

8.0
Expert Rating
The 2017 Hyundai Santa Fe can range from a base, seven-seat family hauler to opulent six-seater—with all-wheel drive available at every step in between.
Read More
8.0
Expert Rating
A new Platinum trim level expands the RAV4 lineup for 2017, but it is missing some key features.
Read More

*As configured. Excludes taxes, title, license and other customary fees, such as dealer documentation fees, tire and battery disposal fees and, where applicable, finance charges. By clicking on “Get Your Price Quote Now”, you agree to our Terms of Use (including the Supplemental Terms) and Privacy Policy. You further consent to being contacted at the number you provided by CarsDirect and certain participating automotive dealerships, which may include autodials, text messages, and/or pre-recorded calls; this consent is not a condition of purchase or service. Message and data rates may apply.
Have feedback about this experience?
Let us know.
Tags:
2017 Compare Cars Hyundai Santa Fe News Toyota News Toyota RAV4 News
2021
The Car Connection
See the winners »
2021
The Car Connection
See The Winner and Nominees »