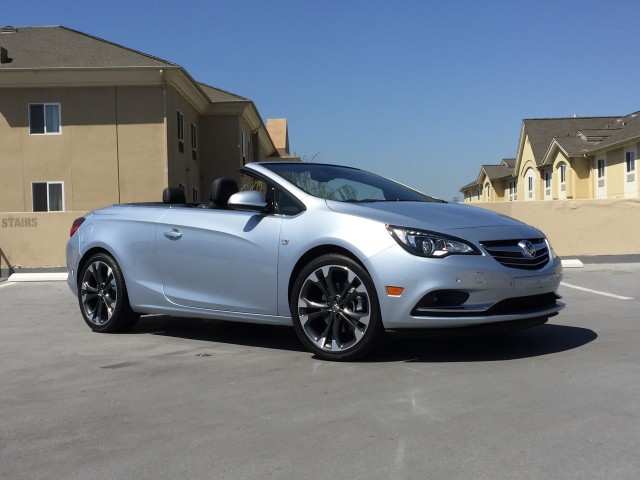 To a great number of Americans, the quintessential spring break involves cruising a Miami Beach, taking in the sun with the top down, picking up some friends, and maybe heading out to Key West.

While the Cascada has the goods to fulfill that fantasy, we’re not entirely convinced that it’s the sort of car that would be appreciated as much as a daily driver.

As the first Polish-assembled vehicle for the U.S., with engineering by GM’s German Opel division, an engine from Hungary, and a transmission from Mexico, the Cascada is a truly global affair.

Yet for all its potential as a “best of” mix of GM hardware, there’s very little charm from the driver’s seat.

The Cascada is sprightly, and it accelerates reasonably quickly and responds well enough—provided the streets are Florida-level. Its 1.6-liter turbocharged four-cylinder engine is rated at 200 horsepower and 207 pound-feet of torque (with an overboost mode delivering up to 221 lb-ft). Peak torque is made at a low 1,800 rpm; but from there up to just past 3,000 rpm, there’s some significant lag if you let your right foot up and then go back into it.

Oh, and as soon as the Cascada faces an uphill climb, gaining momentum feels far more challenging. The Cascada is heavy—really heavy. At nearly 4,000 pounds, it’s a relic of an era when GM relied on extra bracing and bolstering (especially for its convertibles), rather than high-strength steels or aluminum.

A cascade of odd choices

GM’s workaround for that situation, to make the Cascada responsive, is to make the lower few gears of the six-speed automatic rather low, and to delay upshifts, even in moderate acceleration, until revs near the 4,000-rpm mark. That way the upshift lands around the 3,000-rpm mark, where the turbo’s on its best boil and the engine’s closer to its 5,500-rpm power peak.

That weight, and the transmission shift program, takes a deep toll on real-world fuel economy, and the ability to replicate the EPA fuel economy ratings for the Cascada, of 20 mpg city, 27 highway. In about 70 miles of mixed-condition driving around LA boulevards and freeways, over a couple of days, the trip odometer on our test car showed an average of 17 mpg—surprisingly low for a modest four-seater with a 1.6-liter engine.

Yes, the Cascada would have been a much happier, responsive car with the 2.0-liter turbocharged 4-cylinder from the Verano and Regal. And we've seen better in the same conditions with the former V-6 Chrysler 200 Convertible.

You’d think all the weight might lead to decent straight-ahead tracking and a a sense of solidity; but the Cascada also felt unsettled on LA’s battered freeways, requiring frequent small steering corrections to stay straight-on. The relatively low-profile (40) tires on 20-inch wheels probably don’t help much for ride.

The Cascada rides on a version of GM’s so-called HiPer strut front suspension, with a Watts-link, torsion-beam setup in back. While this tuning makes the Verano sedan feel surprisingly sporty and communicative, the extra few hundred pounds of weight here, and downright odd choices for spring/damper tuning, adds up to a car that feels a bit at odds with itself on all but smooth roads; it heaves and leans more than you’d think over big bumps, railroad tracks, and heading quickly around corners yet feels compulsively jittery over surface irregularities and roadway cracks.

The driving position in the Cascada is reasonably good, although the dash feels closer than in other recent GM vehicles; and there’s something dated—next to newer GM cars—about the footwell and the positioning of the brake and accelerator pedals. There’s space for two in back, but if you’re going to put adult passengers back there, they’d better not be very tall. But the rear seatbacks are split in sections and flip forward for cargo space, with a pass-through for long items.

The Cascada feels like a throwback in multiple ways. You still start the engine with a twist of the key, and the starter motor sounds like that of older GM models. And there are buttons here, so many buttons.

We almost forgot the Pontiac G6 Convertible—until we drove the Cascada, which feels, oddly, like an evolution of that model. one that’s grown somewhat wiser and more cultured.

Safety-wise, the Cascada includes pyrotechnic rollover bars behind the rear seat; for deployment, they’re linked to the vehicle’s airbag system. And the extra body bracing down low, in place of the roof and pillars, should yield decent occupant protection. 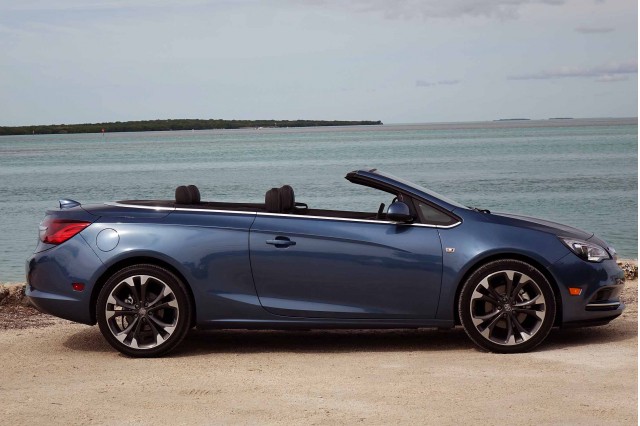 The top powers down quickly and easily, and with poor visibility with it up and some road noise carrying through, the Cascada is a car you’ll want to drive top down as much as possible (it looks more elegant that way, and shows off some of the nice interior details, like the testured, contrast-stitched leather upholstery). Yet even then, wind turbulence isn’t great; there’s a strong upward current just behind the driver’s and passenger’s heads, leading to quite the coiffe if you’re not wearing a hat).

Our test Cascada was essentially in base form, totaling $37,385.

With luxury-car pricing, it’s no bargain

That’s a bit shocking—even more so what you consider that this base version is just $2,260 less than a base BMW 2-Series Convertible. And it’s just $200 less than the bottom-line price of a base 2016 Audi A3 Cabriolet, a car that brings with it an entirely higher-class image, more nimble and refined driving manners, and a graceful feel throughout that seems to elude the Cascada.

The Audi A3 Cabriolet, while about 10 inches shorter than the Cascada, feels nearly as spacious inside; and weighs several hundred pounds less. It also based on our observations returns about 5 mpg better in equivalent real-world driving conditions.

The irony here is that the base 2016 Chevrolet Camaro Convertible is probably a better-riding, better-handling, and in some respects more refined car than the Cascada, for less money. Or could get a V-6 Mustang with the V-6 and six-speed automatic transmission, set aside the money for a good set of winter tires, and still have money left versus the base price of the Cascada.

Buick has some excellent value within its lineup, but as with the recently detailed Envision crossover, there's evidence that not all of GM's Buick deck is clearly laid out, and the Cascada presents as being part of some alternate universe of wishful thinking.

Until GM can reconcile that—perhaps with a lighter, higher-value next generation of this car—it adds up to some simple advice. If the experience of cruising top-down by the beach is everything, sure, go ahead and rent the Cascada. But otherwise, buy something else.