The 2016 Scion iA is one of the best small car picks on the market.

It’s quite a turnaround for Scion, which previously had the lackluster xA and xD models in this size category.

In all fairness, it’s a turnaround that arrived a bit too late, as the Scion brand, a youth-oriented sub-brand of Toyota, is being retired at the end of the model year.

And not all the credit should go to Toyota and Scion, as it is. The iA is actually a Mazda—assembled in Mexico, by Mazda; designed and engineered by Mazda; and essentially the same vehicle that’s badged a Mazda 2 sedan (or a Yaris) for other markets. It’s very closely related to the Mazda CX-3 as well—a high-riding, swoopy hatchback that’s built on some of the same underpinnings.

It’s a superb value. As is customary for Scion, the iA offers no factory options but comes very well-equipped. Yet here the feature set is even better; it includes Bluetooth, cruise control, keyless ignition, a rearview camera system, and power locks, windows, and mirrors—plus a multimedia system that has voice recognition and is ready for app-based streaming audio.

For all that, the iA costs just $16,495 with a manual transmission or $17,595 with an automatic; and it was in that latter form that we test-drove the iA late this winter.

The iA competes against sedan versions of the Nissan Versa, Chevrolet Sonic, Ford Fiesta, Hyundai Accent, and Kia Rio. And against all those models, in nearly every respect, we can see the iA as the better pick.

We emerged from a week with the iA absolutely gushing about what a great car the iA is—especially when we put ourself in the mindset of a budget-strapped shopper trying to get the most new car out of a low payment and sub-$20k sticker price.

Want details? In addition to the value factor itself, click through to see the reasons why we see the iA as something special among small cars, and one of the best subcompact sedan values on the market. 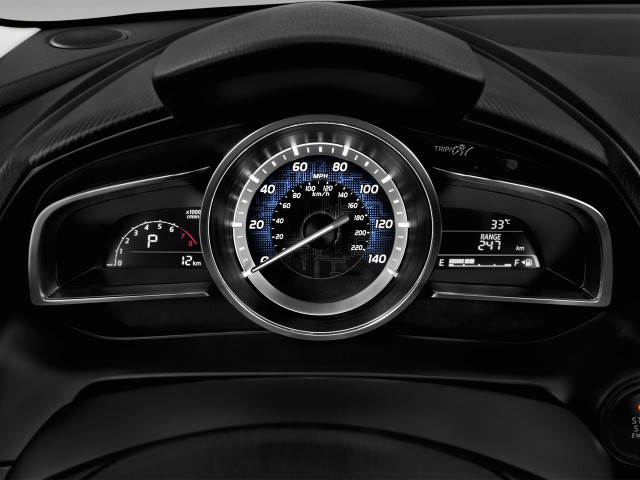 Excellent real-world mpg. There are a number of cars on the market that claim numbers comparable to those of the iA—33 mpg city, 42 highway with the 6-speed automatic transmission, or 31/41 with the 6-speed manual. But very few small cars come close to delivering their EPA numbers when driven briskly, in normal traffic conditions. Based on 140 miles of driving in mixed conditions, roughly split half between dense city crawling and higher-speed freeway errands (and including a full trunk and four adults part of the way), the iA appeared to deliver very close to those ratings in real-world driving—with a trip-computer-indicated average of more than 32 mpg. 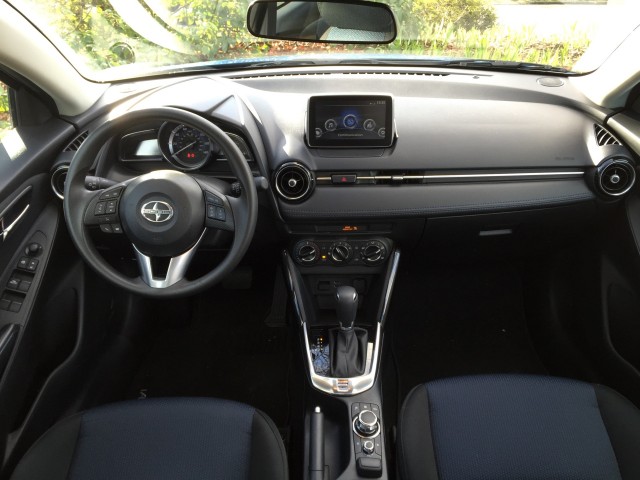 It drives sporty. The Scion iA ride and handles like a more expensive car; its steering is among the best systems we’ve experienced in any small-car model recently; it’s light but well-weighted, it unwinds smoothly, and it provides some feedback. And there’s none of the bouncy, jittery ride qualities you notice in some small cars (wheelbase is just 101.2 inches). Brakes are reassuring, and the 106-horsepower, 1.5-liter inline-4 feels gutsier than you might guess thanks to the low 2,400-pound curb weight. There’s a sport mode that changes the throttle response and shift points somewhat, but it’s purely optional; there’s great drivability in its standard mode. And yes, push it hard into a corner and you won’t be completely embarrassed for the car; this one has some of Mazda’s zoom-soom cred built in. 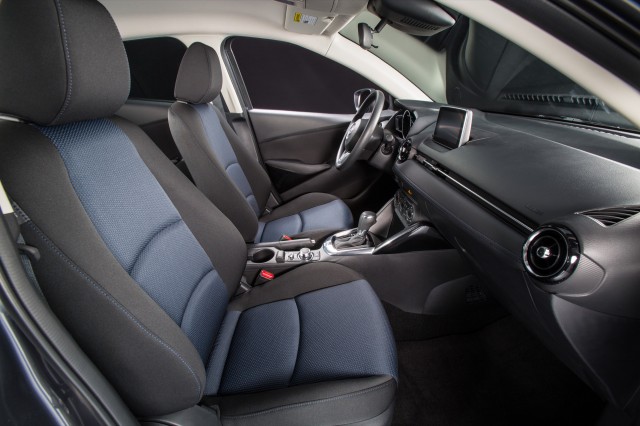 Economy Plus seating. We had this car within a week of driving the BMW X1; while it’s definitely not an apples-to-apples comparison, the seats in the Scion iA do the job better than those—and far better than you’d expect for a car this affordable. The driving position felt just right for this taller driver, with seat-height adjustment and good outward visibility. Entry and exit is also quite easy for those in back, thanks in part to generous door cuts, and the seat contouring in back worked surprisingly well for adults. With an overall width of less than 67 inches, the cabin is significantly narrower than compact or mid-size sedans, so you may find your elbows brushing those of the front passenger and there’s not practical space for someone in the middle position in back. 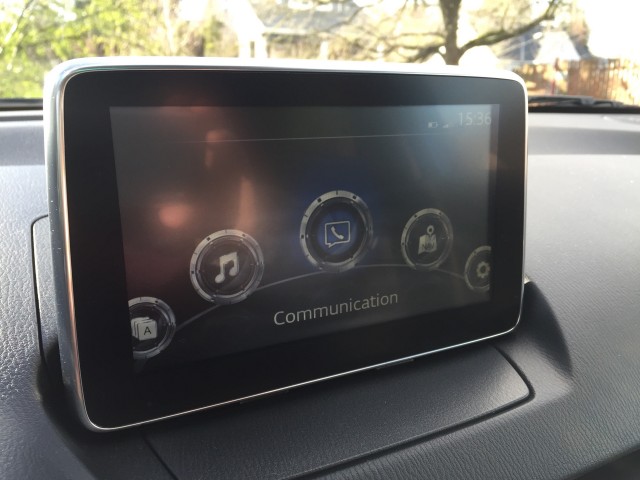 Infotainment far beyond bare-bones. It’s not at all uncommon in this class for affordable subcompact cars to come with a simple four-speaker sound system and a small display that only covers the basics. But the system you get in the 2016 Scion iA is much better than that. First of all, we were genuinely surprised with the quality here; the six-speaker setup sounds great, and fills the cabin with well-rounded sound. But the second thing that surprised us is that this is essentially the full-fledged interface—good-looking 7-inch touch-screen display and all—that goes into Mazda’s more expensive vehicles. The interface is essentially a media hub, with two USB ports, an aux-in port, and Bluetooth streaming connectivity, as well as Pandora, Aha, and Stitcher app functionality. There’s voice recognition and steering-wheel controls, and you can also upgrade this system with navigation at the dealership. The little Commander Control push-and-twist knob is a good redundant control for the screen, too. To the point, this infotainment system is better than you’ll find in other base-model, budget-priced small cars—way better.

Top-notch safety, already proven. The Scion iA is a new model this year, yet it’s already made quite a reputation for itself—as perhaps the best pick for safety in its class. This past year the IIHS singled it out as the first low-priced car—and the lowest-priced car—to offer an automatic braking system as standard. It’s also the only model classified as a minicar to earn an IIHS Top Safety Pick award. A great, high-resolution backup camera system is standard, too; it puts some far more expensive models to shame.

Deals are very likely. Scion-badged iA models will be built through the summer, so stock of 2016 models probably won’t run out until September or October. And as we see it, that leaves lots of room for deals. 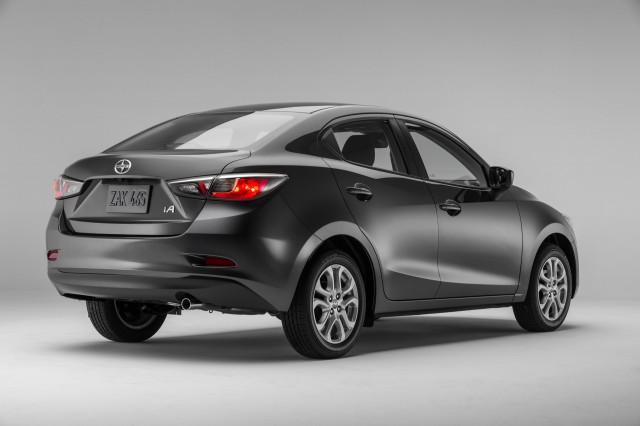 At present, according to our companion publication CarsDirect, the going lease price for an iA is $149 a month with $1,999 down. Pricing expert Alex Bernstein points out that there are plenty of other small cars offering about that same value right now, like the Corolla S Plus, Kia Forte LX, and Honda Fit (a hatchback alternative).

We bet that over the mediium and long term, with the excellent resale-value reputation of pretty much every model sold under the Toyota name, that this model will hold its value well.

It’s likely that there will be even better deals on the iA later in the year. But the 2016 Scion iA is already a great deal; if you’re in the market for an affordable and economical yet well-equipped small sedan, you can’t do any better than this.