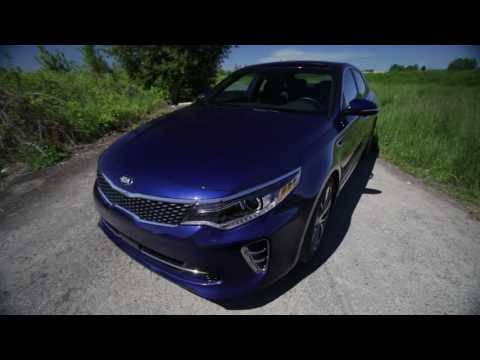 The Kia Optima has officially arrived. Before 2011, it had lurked in the shadows of better mid-size sedans, but a big redesign gave it plenty of punch, and panache.

Since then it's been one of the more value-packed family four-doors. But the new Chevrolet Malibu is a great car, and so are the revamped Honda Accord and Ford Fusion.

Can a big reinvention of its own keep the 2016 Kia Optima in the hunt?

The new Optima is one of the better-looking family sedans you can buy. It's a subtle improvement over the last version. The roofline is a bit swoopier, a bit more coupe-like.

The problem is, we'd say the same for the new Malibu, not to mention the Mazda 6.

Inside, the Optima's cabin uses space more wisely. The dash is no longer canted toward the driver--it's almost a dead ringer for the related Hyundai Sonata, and that feels like a step back. On the flip side, the Optima's switchgear and trim look and feel better, of a higher quality.

The Optima comes with a choice between three different engines. A 2.4-liter inline-4 in base models makes 185 horsepower. A 2.0-liter turbo-4 blasts out 245 horsepower, and a new 1.6-liter turbo-4 turns in 178 horsepower. With any of those, the front-drive Optima shifts gears automatically--with either a 6-speed torque-converter gearbox, or a 7-speed dual-clutch unit.

Fuel economy ratings rise to as high as 39 miles per gallon highway on the small-turbo versions. It's not class-leading, but for a non-hybrid, that’s pretty good. The Optima Hybrid returns in 2017, in case you're wondering.

While the 1.6-liter turbo-4 is the fuel economy leader for now, it doesn't drive well enough for us to recommend it over the base engine. The dual-clutch just doesn't shift smoothly enough to justify the mileage gains. The 2.4-liter inline-4 is a better bet for most needs. Of course, we'd want the most powerful turbo-4. It's quiet enough, and strong enough, to satisfy lots of sport-sedan wants and needs.

The Optima's handling is better this time around the block. It rides with more compliance, and large bumps don’t make it bounce anymore. There's a new layer of confidence in its road manners, versus the thrifty feel of the old car.

Kia's made the Optima cabin more comfortable. New front seats have bigger and more supportive cushions. The back seat is less happy for tall passengers, and the bench seat has short, flat, and low cushions. Spend time riding back here before you buy, if you'll be carrying adults back there often.

On the safety agenda, the Optima is an IIHS Top Safety Pick+, and the NHTSA gave it five stars overall. New on the roster this year are adaptive cruise control, forward-collision warnings, and automatic emergency braking.

The new Optima starts in the low $20,000 range, and all versions have a rearview camera, a 6-way power driver seat, air conditioning, cruise control, and keyless entry. Options include heated front and rear seats, Nappa leather upholstery, and a 14-speaker Infinity audio system.

So what’s the bottom line with the 2016 Kia Optima? It’s a bit less distinct than before, but in almost every other way, it's better than its game-changing predecessor.