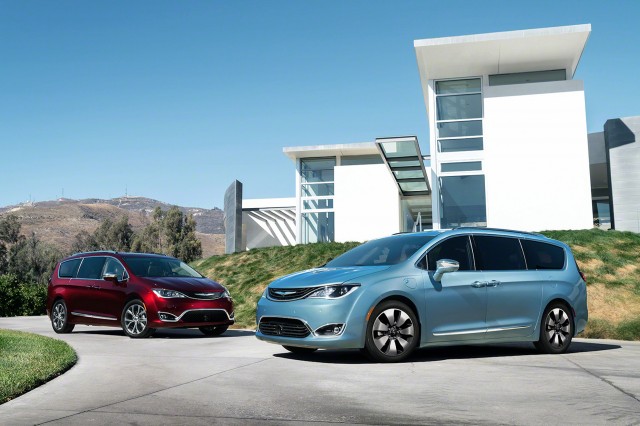 Last week, we reported on rumors that Fiat Chrysler Automobiles and Google were preparing to announce a strategic partnership. Rather than carrying out a merger, as FCA had wanted to do with General Motors (and Ford, and Volkswagen), we suspected that FCA might want to install some of Google's autonomous technology on its new models. Given that the rumors mentioned the 2017 Chrysler Pacifica, our hunch seemed like a fairly good one.

And indeed, it may have been. More gossip has now worked its way through the grapevine, suggesting that an announcement about the Google/FCA deal could come as early as today.

Citing the always-popular "people familiar with the matter", Bloomberg reports that the partnership will indeed center on the Pacifica minivan. If the rumors are accurate, the 2017 Pacifica that's due out later this year will come with autonomous car features developed by Google.

That technology isn't likely to allow for a fully self-driving vehicle, like Google's well-known prototype. However, we'd wager it'll provide more bells and whistles than lane-keeping assist, adaptive cruise control, and other autonomous-like features that are already available on many vehicles. We wouldn't be at all surprised if the 2017 Pacifica came with something akin to Tesla's autopilot, but we'd also expect it to have a few other offerings that appeal particularly to family-oriented minivan shoppers.

According to Bloomberg, the partnership between Google and FCA won't be exclusive, meaning that, for example, Google could continue working with Ford on autonomous vehicles (if it ever was in the first place). Rumors also suggest that Google will base some of its future prototypes on the Pacifica.

If this is true, it sounds like a win-win for Google and FCA.

Google would get to test its autonomous technology on a massive scale. That would strengthen Google's ability to distribute the software (and possibly, hardware) and provide untold gigabytes of feedback from real-world drivers.

FCA, however, might be the bigger winner. The automaker hasn't appeared to push quite as hard as others on autonomous technology, even though such features are of increasing interest to consumers. Partnering with Google would give FCA access to some of the best self-driving software in existence, essentially allowing FCA to leapfrog over competitors who are writing that code on their own.