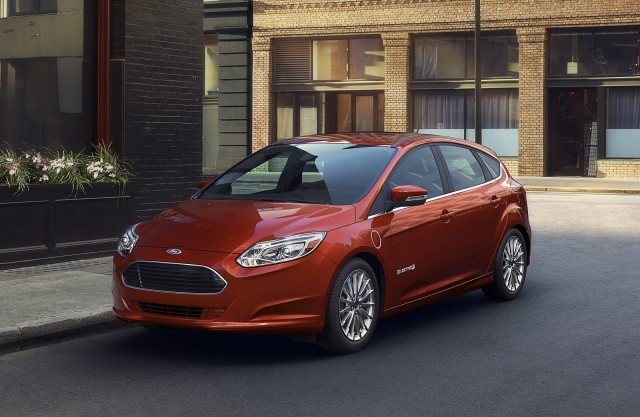 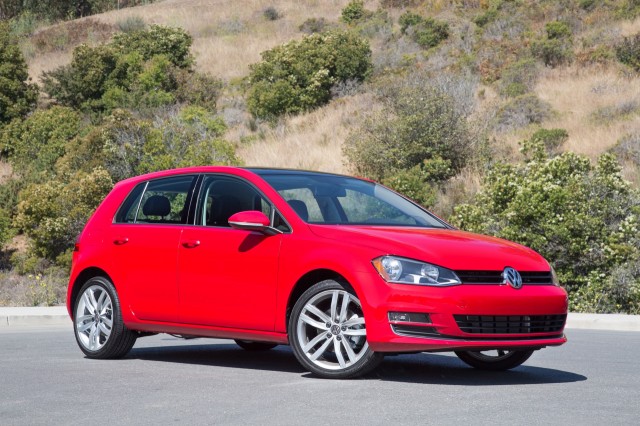 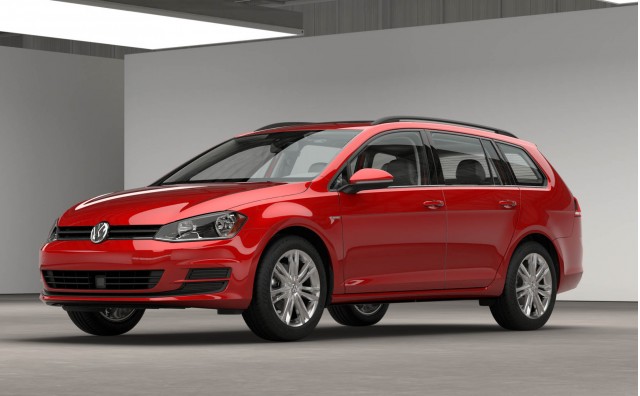 For buyers who put a priority on driving enjoyment, the Volkswagen Golf and Ford Focus are the best-known entries among compact hatchbacks. No longer the province of staid styling and miserly demeanor, they offer well-trimmed interiors and enough features to keep even long-distance commuters happy, comfortable, and entertained.

You'll immediately recognize the VW Golf; it's the endurance champ among compact hatchbacks over more than 40 years and seven generations. The current shape, new for 2015, remains true to its upright origins as the 1974 Volkswagen Rabbit. It's a handsome, rectilinear hatchback, slightly larger than previous generations and more integrated than the model it succeeded.

The Ford Focus was all-new for 2011, and while it's less avant-garde now than it was on launch, it's still the more rakish of the pair. All around, from the long, finely detailed headlamps, along the creased flanks and all the way to the equally stretched taillights, the Focus offers a little more to catch the eye inside and out. There's a Ford Focus sedan too, but it competes with the Volkswagen Jetta; the VW Golf is only sold as a hatchback.

MORE: Read our reviews of the 2016 Volkswagen Golf and 2016 Ford Focus

Inside, the Volkswagen is evolutionary, with the addition of a touchscreen display in the upper center of its dashboard. The seats are comfortable and nicely bolstered, it will hold four adults in relative comfort, and it's brighter looking and more airy, with silver accents to make it less grim than previous base models' largely black interiors.

The Focus interior feels more overtly sporty. It too has comfortable seats, but the design is obsessively detailed throughout, with nice surface sculpting and a crisply tailored look. The one issue we have with the Focus is that the large dash tends to impinge on front-seat space for the driver and passenger. Top models of the Focus, like the Titanium, get a rich, premium feel inside; we also think the high-end Focus models are a bit better hushed for road noise.

The Focus and Golf both perform better than average, with a sportier driving feel than you'll find in other compact sedans and hatchbacks in their size and price range. The Golf is competent, and handles very well. For 2016, it's only offered with fully independent rear suspension that gives a more absorbent ride that most of its competitors—along with some of the best electric power steering and road-noise isolation in the category.

All diesel Volkswagens have been taken off the market until VW resolves its emission-cheating issues with regulators, so there's no Golf TDI turbodiesel this year. The sole engine option for the hatchback is a 1.8-liter turbocharged inline-4 with 170 horsepower that's more fuel-efficient than the base engine in previous Golfs. (A smaller 1.4-liter turbo inline-4 is coming soon, with better numbers yet.) A 5-speed manual gearbox is standard, EPA-rated at 25 mpg city, 30 highway, 37 combined. That's slightly higher than the 6-speed automatic transmission that's the only other powertrain option, rated 25/36/29 mpg. 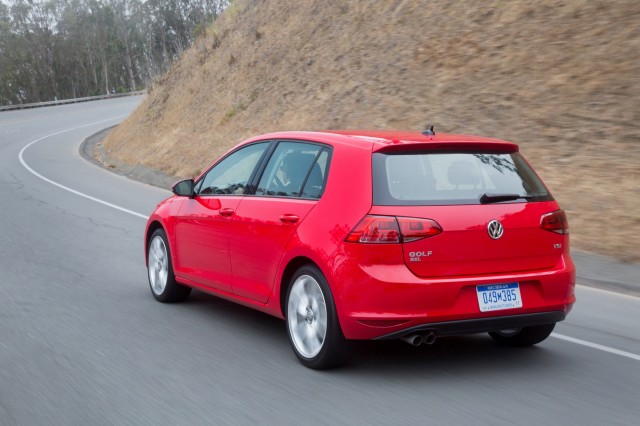 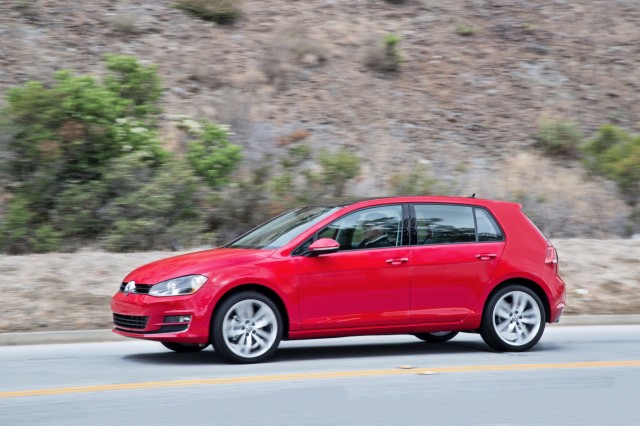 There's also the classic Volkswagen GTI model derived from the Golf, with an even more powerful 220-hp turbo-4 engine. GTI buyers get a choice between 6-speed manual and 6-speed dual-clutch (DSG) gearboxes. It pairs off against the 252-hp Focus ST, a fantastic back-road flogger with a turbocharged 2.0-liter inline-4 and a 6-speed manual only.

The latest Golf has already earned an IIHS Top Safety Pick+ award, and the institute's top rating of "Good" on every test. The NHTSA gives it 5 stars overall and for side-crash safety, 4 stars for frontal impact and roof-crush strength. It has a wide array of standard and optional electronic active-safety systems.

The Focus is now in its fifth model year, and it falls a bit shy in terms of safety. The Ford has been a Top Safety Pick in years past, but no longer earns that honor for 2016. While the IIHS hasn't separately tested the Focus hatchback, the Focus sedan merits only an "acceptable" rating on the new small-overlap crash test. The NHTSA gives it only four stars on the federal frontal-impact test. The Focus doesn't offer automatic emergency braking. 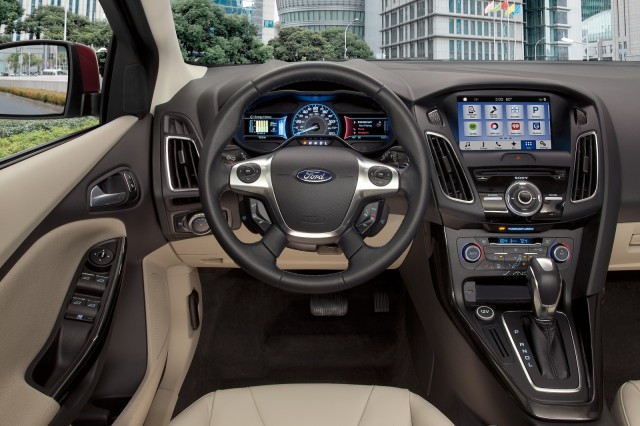 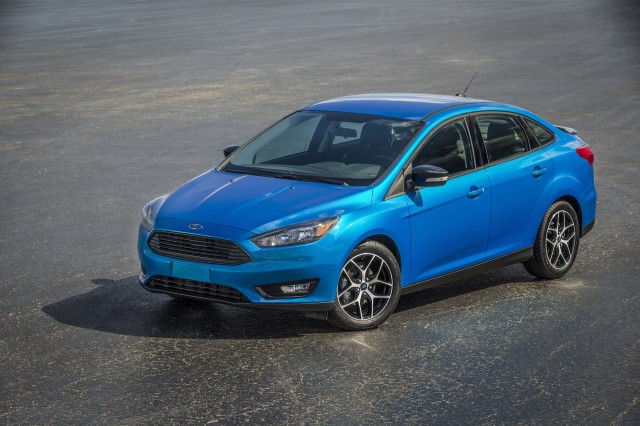 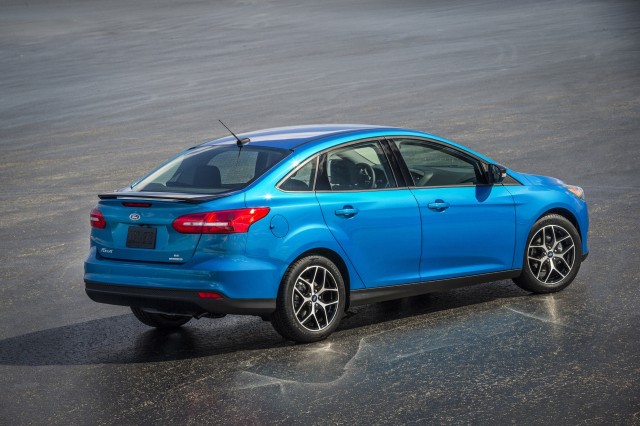 The sprawling VW Golf range also includes the Golf SportWagen and an all-electric Volkswagen e-Golf. The SportWagen drives just like a Golf but with far more interior volume; VW notes that it has more cargo space than some compact SUVs. An all-wheel-drive SportWagen Alltrak joins the range for 2017. The low-volume VW e-Golf, rated at 83 miles of electric range, drives like a somewhat heavier and very quiet Golf. It's the most inconspicuous integration of battery-electric power we know. There's an equally low-volume 73-mile Ford Focus Electric as well, which will be updated for 2017 with a range of 100 miles or more.

The Focus, despite its age, scores slightly higher in our overall ratings. It beats the Golf on both design and features, with high-end (and pricey) Focus Platinum versions offering a few features that even the newer Golf can't match. The VW wins on safety and scores slightly higher on comfort, but with the withdrawal of its diesels loses VW the edge on fuel economy it used to have.

The Focus won our Best Car To Buy competition in 2012, and it remains a surprisingly good and expressive design five years later. Which one you choose comes down to priorities. They're evenly matched on performance: the Golf is competent on the road and fun to drive, making it a balanced vehicle overall, while the Focus—especially the high-performance Focus ST—is one of the best-handling small cars on the market. We like both cars, so you won't lose either way.

8.4
Expert Rating
From efficiency-minded models to the high-performance ST, the 2016 Ford Focus remains one of the best-driving small cars on the market.
8.0
Expert Rating
Between base, e-Golf electric, and high-performance GTI and Golf R versions, the 2016 Volkswagen Golf lineup doesn't forget about the space-and-versatility fundamentals of hatchback—or SportWagen—ownership.

8.0
Expert Rating
The 2016 Focus feels athletic and nimble no matter which way you have it; although the ST and RS versions are the pulse-quickening kings of the lineup.
Read More
8.0
Expert Rating
Most of the lineup offers a perky feel and relaxed but grippy handling—then GTI and Golf R models step up the performance in all respects.
Read More

10
Expert Rating
The Focus offers pretty much everything you'll find in other compacts, although the Titanium goes premium, without the premium price.
Read More
8.0
Expert Rating
Updated infotainment systems for 2016 add to what's already one of the better-featured interiors in this class.
Read More

8.0
Expert Rating
From the 1.0-liter EcoBoost SFE models—now with automatic—to the Focus Electric, there's a lot to take note of here.
Read More
8.0
Expert Rating
The Golf lineup is remarkably fuel efficient across the range, topping out at the e-Golf.
Read More

Front Wheel Drive Read Full Specs
Front Wheel Drive Read Full Specs
Compare Free Dealer Price Quote
With competitive price quotes from multiple dealers, you will be prepared when you meet your local car dealer. Please tell us how to contact you so that dealers can compete for your business!
2016 Ford Focus
There are no Ford dealers in our network that are located near the ZIP code.
2016 Volkswagen Golf
There are no Volkswagen dealers in our network that are located near the ZIP code.
Thank you!
We have sent your request for price quotes on the 2016 Ford Focus and 2016 Volkswagen Golf to the dealers you requested. They should be in touch shortly.
The Car Connection's dealer quote process is powered by our partner site CarsDirect.
Your request for a fast, free price quote on a 2016 Ford Focus and 2016 Volkswagen Golf is in process. The CarsDirect Dealer(s) listed below will contact you shortly to discuss your request and to provide a quote. If you have questions now, you can contact the dealer(s) directly using the information provided below or contact CarsDirect's award-winning customer service team at 1.888.CarsDirect (1.888.227.7347) or [email protected]
For your reference, your customer transaction number is .
Tell us a little bit about yourself
Looking for dealers in your area...

By submitting this form, you agree to be contacted at the phone number you provided, which may include autodials, text messages, and/or pre-recorded calls; this consent is not a condition of purchase. Message and data rates may apply. Privacy Policy
Have feedback about this experience?
Let us know.
Tags:
2016 Compare Cars Volkswagen Golf News Volkswagen News
2020
The Car Connection
See the winners »
2020
The Car Connection
See The Winner and Nominees »