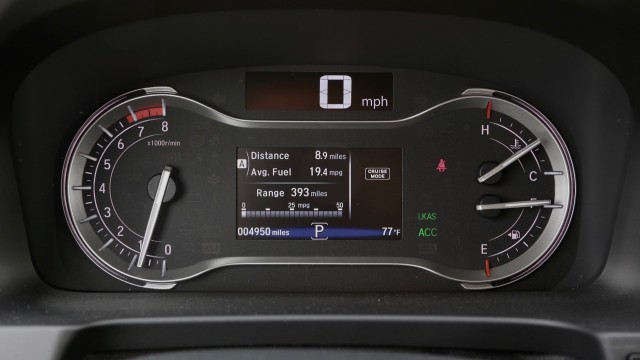 Summer is finally here, and naturally that means it's time for some road trips.

Our long-term 2016 Honda Pilot Touring AWD that joined the TCC test fleet earlier this year finished up its duty in the mid-Atlantic states and has migrated north to the Midwest to report for family duty.

Family cars like the Pilot are all-important shuttles for children and gear, families and friends alike. Almost equally important are the miles per gallon those family cars return, which prompted us to check in: What kind of fuel economy is our 2016 Honda Pilot getting in the real world?

Our White Diamond Pearl long-term Pilot arrived with a mere 259 miles on the odometer. After no time we were out of the break-in period.

Like all Pilot Touring SUVs with all-wheel drive, our family truckster comes standard with an impressive list of standard features. Starting with the standard 280-horsepower V-6, the Touring trim level adds a standard 9-speed automatic (an upgrade over the 6-speed found in less-expensive versions). EPA fuel economy is published at 19 mpg city, 26 highway, and 22 combined.

Based on our calculations, we've struggled to meet some of those numbers.

Over our Pilot's stint in the mid-Atlantic it consumed 289.59 gallons of gasoline over 5,554 miles. By the numbers, that's a 19.2 mpg average, which is roughly close to the city rating.

How did we get there? Long stretches of city driving in between a handful of 600-mile highway trips—say, a 50/50 split. Now add in the break-in mileage. Continuing on as the odometer neared 5,813 miles, economy increased—barely—to 19.3 mpg. This was all done with an average of two adults and two adults' worth of carry-on baggage.

Shuttling the car up north meant a long road trip to get it there. Starting from Atlanta, we drove the Pilot to Detroit, then on to Chicago before landing in Minneapolis. We averaged 22.7 mpg on the 1,650-mile journey and consumed 72.63 gallons of gasoline.

There are a couple of notes to make about that road trip: About two-thirds of our drive was without cruise control, and the final leg of the trip was into heavy headwinds. We kept the needle at reasonable highway speeds—over 70 mph—throughout most of the trip. One adult and two bags were on board for most of the trip, and for the final 200 miles from Minneapolis to Detroit Lakes, Minnesota, we carried two adults, two children in car seats, a dog, and lots of gear.

We filled up the Pilot with regular unleaded, which cost anywhere from $2.69 in Detroit to $2.29 in Minneapolis.

Curiously, our trip computer overestimated our actual fuel economy—by 20 to 30 percent in some cases. We've reached out to Honda and they agreed that it's abnormal for the trip computer to be that far off. We checked to see if there were any similar complaints filed with the NHTSA and didn't find any. Honda said that they'll investigate the issue when we bring the car in for service, so we'll report back on what they say.

Over the coming months we'll be taking our Pilot in for its first service, taking a closer look at the infotainment system and apps, checking out the safety tech, and looking at some accessories.

Of course, we'll put it through the family-style challenges by which every crossover SUV should be measured. From installing child safety seats and cleaning up spills to hauling all the gear and "Tetris"-style loading and unloading, we'll put the Pilot through its paces and dutifully report back.

Looking down the road, we'll check its snow-readiness and keep an eye on fuel economy in mixed driving in future updates.

Follow along with us, and connect with us down below, too, if you have a task or a question in mind for our long-term road test.