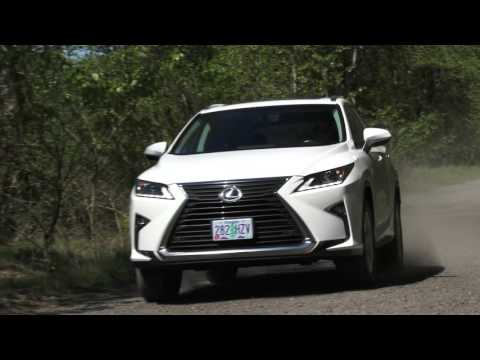 The Lexus RX is a trend-setter. It's been the best-selling vehicle in the luxury brand's lineup since it was new. It convinced other luxury brands that crossover SUVs were the way to big profits.

This year, there's a new RX, with more interior space, a more lavish look and feel, and a suite of new safety-tech features.

Does that make it the best one yet?

It's safe to say this year's model is the boldest RX yet. The softy styled crossover is gone. It's been replaced by an edgy, sharp design with lots of angles and creases, a flowing beltline, and a blacked-out C-pillar that makes the roof appear to float. If you notice a similarity with the latest Nissan Murano, you're not alone.

Inside you’ll find a layout that has been reconfigured for an airier, more open feel. The controls have been streamlined, and there’s now an available 12.3-inch infotainment screen with full-size map.

Two powertrains are offered on the new RX. Power comes from either a 3.5-liter V-6 with 295 horsepower connected to an 8-speed automatic transmission or a hybrid version that has a total of 308 horsepower. With either powertrain, there's a choice of front- or all-wheel drive.

The RX is reasonably efficient with an EPA fuel economy rating of up to 28 miles per gallon highway in non-hybrid form. The hybrid hits the 30-mile-per-gallon mark.

CHECK OUT: Tesla Model 3: What we know so far about the production electric car

There's a newfound attitude from the Lexus RX driver seat. This crossover SUV is simply more communicative, especially in F Sport trim. It's still aimed mostly at the crowd looking for comfort, though. The engine is strong, but 0-60 mph times are near the 8-second mark. The RX's car-like suspension tuning offers a nicely controlled ride that isn’t floaty, and there's better steering feedback than in past models.

At its heart, the RX remains a pleasant-driving mid-size crossover SUV, and the harsh impacts that could upset a true spot sedan or high-performance model are damped out.

Interior space hasn’t been sacrificed for its racier form. The new RX is nearly five inches longer than before. It remains a five-passenger model, for now, though a three-row version has been confirmed by Lexus as on the way.

It’s easy to get in and out of the RX thanks to ideal ride height. Front-seat comfort is great, and the driving position feels a bit more car-like than previous versions or some of the competition. Back-seat accommodations are ample for just about any passenger size, and this rear seat back splits 60/40. On hybrid models, the rear seat is about an inch higher, since the batteries are stowed beneath it.

The IIHS already named the RX a Top Safety Pick+, and it earned a superior score in front crash prevention. A long list of active safety features are offered, such as adaptive cruise control, lane-keeping assist and lane-departure warnings, and blind-spot monitors.

Priced from just under $42,000 the RX comes standard with LED headlights, Bluetooth, a rearview camera, and an 8-inch infotainment system with a futzy mouse interface. Frankly, we're not fans of it--it requires a lot of on-screen attention.