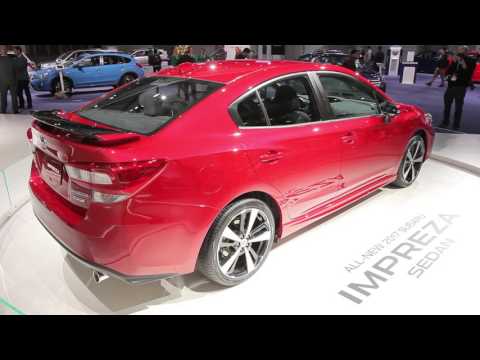 Subaru is best known for its all-wheel-drive wagons, and for its racy WRX. But what about mainstream economy cars?

That’s where this car comes in. It’s the 2017 Subaru Impreza, the Japanese automaker’s compact sedan and hatchback, and it’s taking a bow this week before it goes on sale later this year.

MORE: Read about the Subaru Impreza

The Impreza has a smart new style that’s more crisp and more sleek than ever, whether it’s a four-door sedan or a five-door hatchback. The curves and cutlines baked into its profile would fit easily on a sporty Mazda or Acura.

Inside, the cockpit’s ventured off in a more expressive direction. Subaru’s plain past has given way to a dash with a tall center stack of controls and a wing-shaped line that sweeps across the cabin.

Under the sheetmetal, the Impreza’s architecture is new. it’s about an inch and a half longer and wider than before, for better interior space—particularly rear-seat room. It sits a half-inch lower, for a more athletic stance.

Subaru says new running gear make the Impreza more agile and more fun to drive. The engine’s a massaged version of the current 2.0-liter flat 4-cylinder. With direct injection, it’s now rated at 152 horsepower. Subaru still offers a six-speed manual on base models, but a CVT will be found on most versions, and some will come with paddle shift controls and programming for seven simulated transmission gears.

A new suspension is meant to deliver better roadholding, and the new architecture puts the Impreza’s center of gravity lower, for less body roll. On the Impreza Sport, Subaru fits 18-inch wheels, tunes the suspension for a more sporty feel, and adds torque vectoring for more precise handling.

Subaru has a reputation for delivering top-notch safety. The new Impreza gets all its latest technology, from a standard rearview camera, to automatic high beams. A bundle of safety equipment on some models adds forward-collision warnings with automatic emergency braking, lane-departure warnings, and adaptive cruise control.

All Imprezas will come standard with power features, touchscreen audio, and Android Auto and Apple CarPlay. Options will include heated seats, leather, a power sunroof, navigation, a power driver seat, and premium audio.

There’s no word on pricing yet, but the Impreza goes on sale later this year—and a hot WRX version can’t be far off, can it?