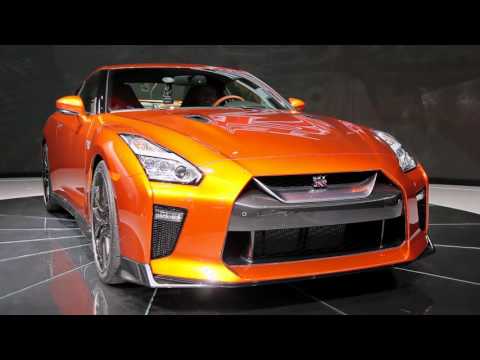 This year, the GT-R gets its most substantial updates since it was new in 2007. It’s a mild update, really, one that gives it more power, a new cockpit, a new infotainment system, and some lightly tweaked styling cues.

The biggest change comes up front. There’s a new V-shaped grille that’s said to be better for cooling the GT-R’s intense powertrain. New spoilers give the supercar a more favorable aerodynamic profile, the side sills are wider, and the hood’s been reshaped with sharper lines.

This year, engineers have massaged the GT-R’s 3.8-liter V-6 for another 20 horsepower. Torque is up by 4 pound-feet to 467 pound-feet. Both are generated by a little more turbo boost, which helps acceleration over 3,200 rpm, Nissan says. No one’s saying if the GT-R is quicker to 60 mph—it might be tough to beat the current car’s 2.9 seconds.

Elsewhere in the new GT-R, there’s a new look, with a leather-wrapped instrument panel and an 8-inch touchscreen display, with fewer than a dozen buttons to control its many features, which include a telematics system with navigation and mobile apps.

Other changes make for a more comfortable driving environment. Nissan’s fitted lighter-weight seats to its supercar, and has moved the shift paddles to the steering wheel for quicker operation. Active noise cancellation and more sound deadening round out the changes.

Nissan hasn’t said how much it will charge for those updates, but the 2017 GT-R goes on sale this summer.