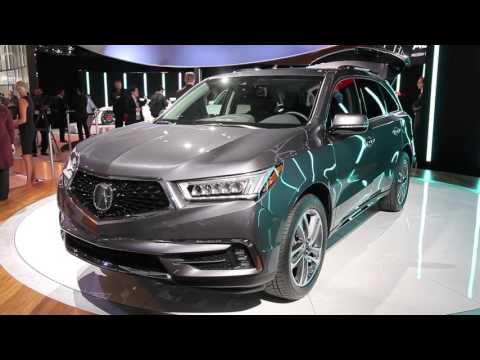 The Acura MDX is one of the standouts in the luxury crossover SUV class, with great room for passengers and strong performance.

What’s it missing? How about a hybrid version? That's what Acura unveiled at the 2016 New York auto show.

MORE: Read about the Acura MDX

The big news for the 2017 Acura MDX is fuel economy. The Sport Hybrid system that’s found on the RLX sedan and the new NSX supercar has made its way to the big SUV.

The system pairs a 3.0-liter V-6 with a 7-speed dual-clutch transmission, a lithium-ion battery pack, and three motors—one at the transmission, two at the rear to deliver torque vectoring.

All told, the system generates 325 horsepower, and Acura promises EPA gas mileage ratings of up to 26 miles per gallon highway.

Other MDX models continue to draw power from a 3.5-liter V-6 with 290 horsepower, a 9-speed automatic, and a choice between front- and all-wheel drive. In this version, the all-wheel-drive system has torque vectoring, but it’s delivered mechanically, rather than through electric motors.

Across the lineup, the MDX now offers an adaptive suspension. Along with steering, transmission, and throttle response, it’s adjustable through four modes, from Comfort to Sport+.

Changes to the MDX’s interior are few, but safety gear has been upgraded to include standard forward-collision warnings with automatic emergency braking; lane-departure warnings; and adaptive cruise control. Rearview and surround-view cameras are also standard.

Among other new features, the 2017 MDX adds more USB ports and three-zone climate control. Finally, styling’s been updated too, mostly to soften the MDX’s front end.

Pricing hasn’t been announced, but the 2017 Acura MDX reaches showrooms later this year.