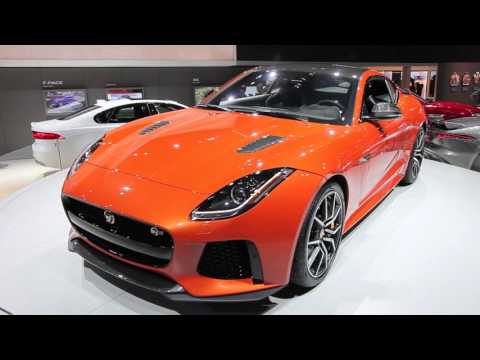 Since 2014, the Jaguar F-Type has been one of the most outrageous sports cars on the road. Stunning looks and thundering V-8 power make it a real 911 and Corvette rival.

Now the F-Type is pushing its boundaries, and nudging supercar territory with a new edition, the 2017 Jaguar F-Type SVR.

MORE: Read about the Jaguar F-Type

The SVR is the highest-performance spin-off of the F-Type to date. It cranks up the pressure on its supercharged 5.0-liter V-8 to the tune of 575 horsepower and 516 pound-feet of torque, outpacing rivals like the 911 Turbo and AMG GT.

With standard all-wheel drive and an eight-speed automatic, the F-Type SVR blasts to 60 mph in under 3.5 seconds, reaching a top speed of 200 mph (or 195 mph for the convertible). It’s the second-fastest Jaguar ever, after the bona-fide supercar, the XJ220.

To handle the high-speed needs of the F-Type, Jaguar’s Special Vehicle Operations engineers tuned and tweaked the car’s suspension. New shocks have been fitted, a slightly softer anti-roll bar aids turn-in, and new lightweight suspension knuckles and wheels cut down on unsprung weight.

All the F-Type’s driving systems get their own calibration, from the all-wheel-drive system to the steering to the transmission. Pirelli P Zero tires are standard, and carbon-ceramic brakes are offered. All told, the F-Type SVR can weigh about 110 pounds less than the standard V-8 car.

For aerodynamic stability, the SVR has more underbody panels and adds a deployable rear wing, which raises into place above 60 mph.

The SVR’s cabin is stocked with most of the F-Type’s luxury goods, including a new infotainment system and 14-way power sport seats finished in quilted leather. Rounding out the gear are SVR logos and badges, and a 770-watt Meridian surround-sound system.

The F-Type SVR goes on sale this summer. Both the coupe and convertible are priced at about $130,000, the most expensive F-Types yet.