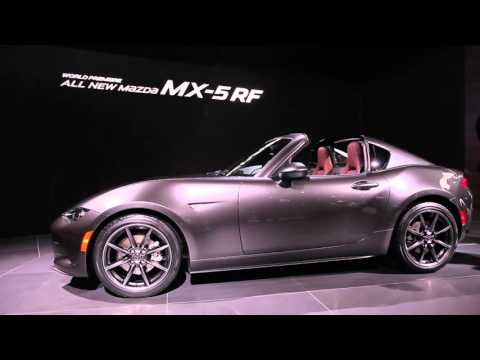 The Mazda Miata is one of the best sports cars on the road. New just last year, it still has a lock on nimble rear-drive handling.

MORE: Read about the Mazda Miata

RF stands for “retractable fastback,” and that’s a good description for the Miata’s fantastic new fold-away roof. It’s not a compact, temporary-looking piece like the last-generation folding-hardtop Miata. This one has sloping pillars that lift away so the center roof panel can stow beneath them.

The fold-away top can be opened or closed at speeds of up to 7 mph. Since it’s a compact design with just a singled stored piece, the top fits in the same space as the standard Miata convertible top.

The Miata RF doesn’t change much about what we love about the Miata. It’s powered by the same 2.0-liter inline-4 with 155 horsepower. It weighs about 100 pounds more than the standard car.

Zero to 60 mph times should still clock in at about six seconds with a 6-speed manual or automatic.

There’s no word on pricing or an on-sale date, but we expect the Miata RF to come in under $30,000, and to hit showrooms by late fall.