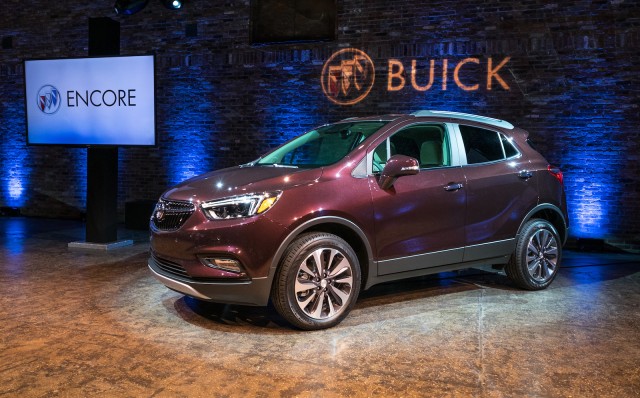 The Buick Encore has been a surprise hit for GM’s premium nameplate. It’s turning four years old this year—and that means it’s time for an update.

The Encore is still Buick’s smallest SUV, but now it fits better into the lineup along with the new Envision and Enclave. The front end has been reworked with a new wing-shaped grille flanked by available LED headlights with a sharp lighting signature. The overall effect softens up the Encore’s steeply raked nose and blends it better with the rest of the body.

At the back, the Encore’s taillights have gone LED, too.

The cabin is where the more important changes take place. The dash is less cluttered than before—the center stack has been cleaned up and pared free of dozens of buttons, as the Encore adopts a new infotainment system. The new setup has an 8-inch touchscreen and comes standard with Apple CarPlay and Android Auto.

The Encore also gets a 4.2-inch display screen between its gauges, as well as keyless ignition and standard in-car wireless data hardware.

Seating and comfort haven’t changed, otherwise, with seating for up to five passengers and cargo space of about 48 cubic feet when the rear seats are folded down.

On the performance front, the Encore continues to offer a choice of 4-cylinder engines. Base versions come with a 1.4-liter turbocharged 4-cylinder coupled to a 6-speed automatic. With 143 horsepower, it’s offered with front- or all-wheel drive.

There’s more power available as an option, courtesy a direct-injected 1.4-liter turbo inline-4. It’s rated at 153 hp, and comes with a 6-speed automatic, and a choice of front- or all-wheel drive. This version also has stop/start for better fuel economy—it’s a feature Buick says will be included on every one of its new cars from now on.

Fuel economy is rated as high as 34 miles per gallon highway in the 2017 Encore—even in the Sport model, which gets its own wheels and suspension tuning.

Pricing hasn’t been announced yet, but the 2017 Buick Encore goes on sale this fall.