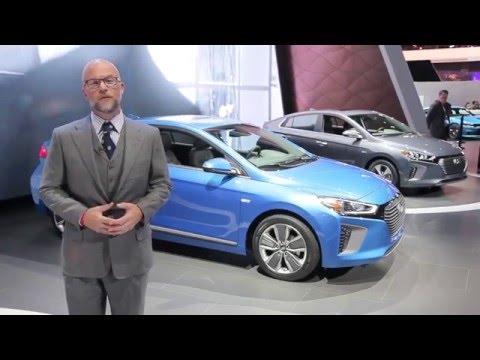 Hybrids, plug-in hybrids, and electric cars are all now a permanent part of the automotive landscape.

Hyundai isn’t about to be left out of that brave new world. Its green-car ambitions gets a serious boost with this--the 2017 Hyundai Ioniq.

MORE: Read about the Hyundai Ioniq

The Ioniq breaks new ground for Hyundai. It’s offered hybrid and plug-in hybrid versions of its mid-size Sonata sedan, but this will be the first Hyundai to be sold only as a green car. As a rival for cars like the Toyota Prius, Chevy Volt, and Ford C-Max, the Ioniq will come in three versions: hybrid, plug-in hybrid, and electric.

Hyundai expects the hybrid model will be the most popular, while the plug-in cars will give it a step up on the budding electric-car market that includes everything from today’s Nissan Leaf to the upcoming Tesla Model 3.

The Ioniq shares some of the body structure of Hyundai’s compact Elantra sedan, but it has a hatchback body style all its own. It’s a fairly conventional looking design, with a grille that links it to the rest of the Hyundai lineup—but one that changes depending on which powertrain is installed.

The powertrain lineup is impressively diverse. The hybrid Ioniq comes with a 1.6-liter 4-cylinder with direct injection and 104 horsepower, teamed to a 43-horsepower electric motor. A 1.6-kilowatt-hour battery sits under the rear seat to store energy. Paired with a 6-speed dual-clutch transmission, the hybrid drivetrain is pegged at a total of 139 hp going to the front wheels.

Plug-in hybrid versions of the Ioniq share the essentials, but get a more powerful 60-hp motor and a bigger, 8.9-kilowatt-hour battery pack. On electric alone, the plug-in Ioniq can go for up to 25 miles before its gas engine powers up to move the car and to recharge its batteries.

The electric Ioniq wears a flush-front grille to give it a distinct look from the other models, and the shift lever inside is replaced by pushbutton controls. The drivetrain pairs a 28-kilowatt-hour battery pack and a 120-horsepower electric motor to give the EV a driving range of up to 110 miles.

Details are few, and Hyundai hasn’t given out complete EPA ratings or pricing just yet, but the Ioniq goes on sale later this year.