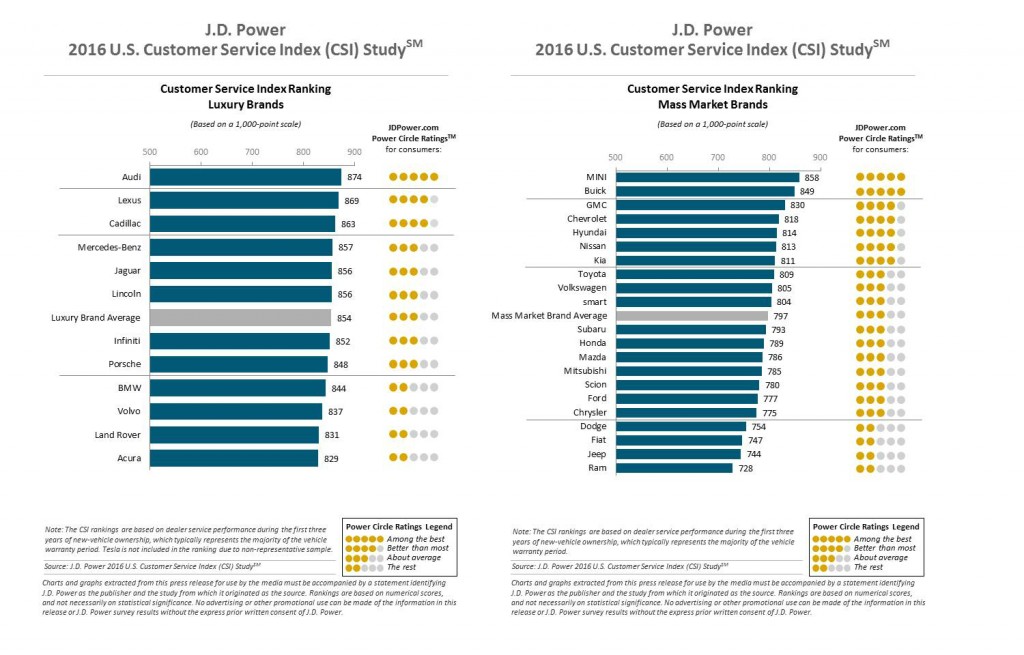 No one likes taking a car in for service, and as J.D. Power's latest study shows, we loathe the process more today than we did a year ago. That said, some dealers make it far more bearable than others.

As you might expect from the name, Power's U.S. Customer Service Index gauges consumer satisfaction with both maintenance and repair service carried out at franchised dealer facilities. The 2016 Index was based on surveys fielded from over 72,000 motorists between October and December of 2015. The study was limited to owners of 2011 to 2015 model-year vehicles.

The trouble with recalls

The good news for the auto industry is, average satisfaction scores are still fairly high.

The bad news is, consumers are less happy with recall service than with regular maintenance service. As Power explains: "Compared with customers having non-recall work performed, those having recall work done are less likely to have their vehicle returned to them cleaner and with the same settings as when they brought it in and less likely to be contacted by the dealer after the service is complete."

Why is that bad news? Because high-profile recalls like those related to Takata airbags, General Motors ignition switches, and eventually Volkswagen's Dieselgate mean that millions of Americans will take their cars in for recall service in the years to come. Unless dealerships make a concerted effort to improve satisfaction on those visits, scores are likely to continue their downward trend.

That could signal further erosion of brand loyalty. As Power's Chris Sutton explains, "There is a need for consistency in the service experience, regardless of the reason for the visit. A lack of consistency, particularly for recall work, can damage customers’ perceptions of the brand and negatively impact their likelihood to recommend and repurchase the brand."

Here are some of the other key findings from J.D. Power's 2016 U.S. Customer Service Index:

Just say "hi": When respondents were greeted within two minutes of their arrival at a dealership, satisfaction scores shot up 44 points. Unfortunately, more than a quarter of survey participants--27 percent, to be exact--said they waited longer to be acknowledged.

Waiting around brings scores down: Customers who waited less than an hour and 40 minutes for service scored their satisfaction at 835. When waits edged beyond that, scores fell precipitously to 756. Waiting area amenities like coffee and wi-fi can improve scores, as can shuttle service and loaner vehicles.

Dealers don't text: Text messages have become an increasingly common part of consumers' daily lives. We get notified when packages have been delivered, when our tables are ready at restaurants, and so on. Both Gen X and Gen Y are very text-friendly, with 37 percent and 38 percent expressing interest in receiving automotive service updates via text message. Unfortunately, only two percent of respondents said that their dealers offered text notifications.

Get it right: Among the six percent of respondents who said they had to take a vehicle for service twice (or more) because the dealer failed to fix it the first time, satisfaction scores averaged 611. That's 207 points lower than those who said their dealers nailed it in one go. Respondents said that repeat visits were most often caused by work that didn't fix the problem (28 percent) or by technicians who couldn't find the problem the first time (22 percent).

Luxury dealers do it with style: Among luxury brands, the average service satisfaction score was 854. Audi earned top marks, with a score of 874. Lexus, Cadillac, Mercedes-Benz, Jaguar, and Lincoln also finished above the industry average. Acura performed the worst, with a score of 829--though Land Rover, Volvo, and BMW have plenty of room for improvement, too.

General Motors is onto something:  In the mass-market segment, MINI landed the best score of 858, well above the average of 797. However, GM brands performed especially well, with Buick, GMC, and Chevrolet taking the #2, #3, and #4 spots, respectively. Hyundai and its sibling, Kia, also performed above the segment average, as did Nissan, Toyota, Volkswagen, and smart.

Fiat Chrysler is in trouble: FCA brands have struggled to improve on surveys like this, and in this case, it doesn't appear they've made much headway. The five lowest-rated brands in Power's study were all from FCA. Ram landed at the very bottom, with 728 points. Jeep, Fiat, Dodge, and Chrysler performed only slightly better.

Click the image above to see scores for all auto brands included in the survey.

Do these findings match your own experiences? Share your service stories--good and bad--in the comments below.