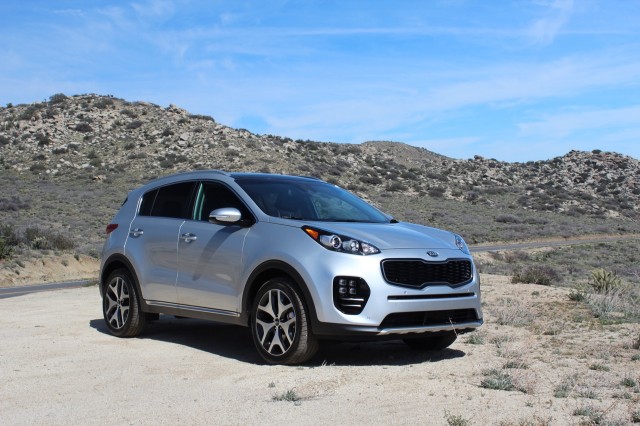 Kia made some great choices for its completely redesigned 2017 Sportage—choices that make it a better-driving, more comfortable vehicle than some of its key rivals.

The Kia comes with a standard 181-horsepower, 2.4-liter four-cylinder engine, or an available 2.0-liter turbocharged four that makes 240 hp and 260 pound-feet of torque.

In contrast, the Tucson makes do with a just-adequate 2.0-liter four-cylinder engine (which we think Americans won’t like as much, as you need to keep the revs up) or a 1.6-liter turbocharged four-cylinder engine with an automated dual-clutch transmission that’s smooth and quick enough most times, yet perplexingly sluggish-to-react at other times.

Not in lock-step with Hyundai cousins

Although you’ll find essentially the same (or some of the same) engines used across other Kia/Hyundai couplets like the Sonata and Optima, the Rio and Accent, and the Forte and Elantra, it’s not nearly the case here.

Kia believes that the way it decided to equip the Sportage better fits the needs of American drivers, said Orth Hedrick, the vice president for product planning. at Kia Motors America.

Based on preliminary driving impressions, we think he’s right. The Sportage has a refined, responsive feel both in town and out on the open road; it’s tremendously improved in ride quality and cabin quiet; and it gets a lot of details right that were missed in the previous generation. 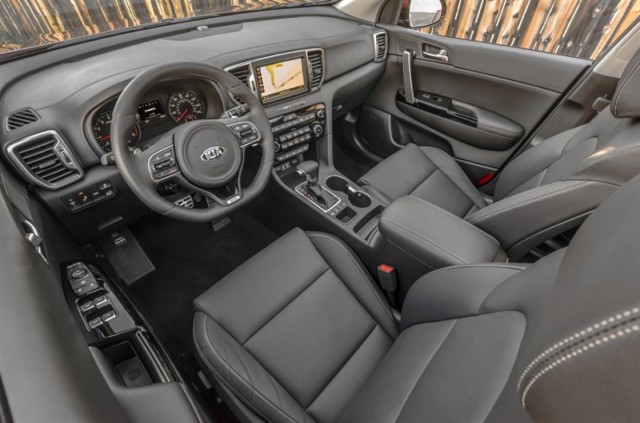 Seating and interior materials are two of those things. Seats feel more supportive, and now have thigh bolsters that are just long enough for tall folks but not too constricting for smaller drivers. And compared to the previous-generation version, Kia has slathered on the soft-touch surfaces, and kept the cockpit-styled dash but slightly angled to the driver, but pushed the corners out.

Base 2.4-liter models weigh around the 3,300-pound mark. That’s actually slightly less than a base 2.0-liter Tucson, too. But the 2.0-liter SX model, as we drove it, weighs nearly 4,000 pounds with all-wheel drive.

You’ll feel that weight in corners, for sure; two of the odd details we noted during out drive were the odd way the steering unwound in its sport calibration, and the unexpected (and unnecessary) hunting of the six-speed automatic transmission—both likely related to this vehicle’s weight. But overall, the Sportage has a sense of refinement and heft that tends to elude models in this class—especially those without a luxury badge. And it drives like a refined mid-size sedan, with a rigid crossover’s body structure.

It's a worldly effort, inside and out

Kia says that it’s aiming at what it calls “passionate nomads” with the Sportage. We’re not entirely sure what Kia means by this, but what you should take away is that this is a crossover that mixes worlds. It’s one of the most flamboyant models in its class on the outside, yet premium, almost conservative and German, from the inside, with its rather dark, formal interiors and soft-touch surfaces.

The Sportage is far from the roomiest in its class. The Honda CR-V is about three inches longer overall, while it rides on a wheelbase that’s two inches shorter. It shows the extremes of such tradeoffs; the CR-V ends up with an interior that feels far more real-world spacious, while the Sportage has, relative to other vehicles in its class, a more planted stance, with the wheels pushed out to the corners.

The difference in EPA mileage seems quite trivial. The base Sportage LX earns an EPA-rated 23 mpg city, 30 highway with front-wheel drive. while the base Tucson gets 23/31 mpg (the same EPA Combined rating of 26 mpg).

All said, the mileage is still a weak point

Altogether, its real-world mileage isn’t at all impressive, though. We struggled to get an average figure in the low 20s over a day spent driving two different Sportage SX models on a Southern California mix of mountainous two-laners, freeways, and boulevards.

In the current market, where the price of gas remains near record lows, that's unlikely to be cause for hesitation among many Sportage shoppers, while the extra powertrain pep will surely be a selling point. 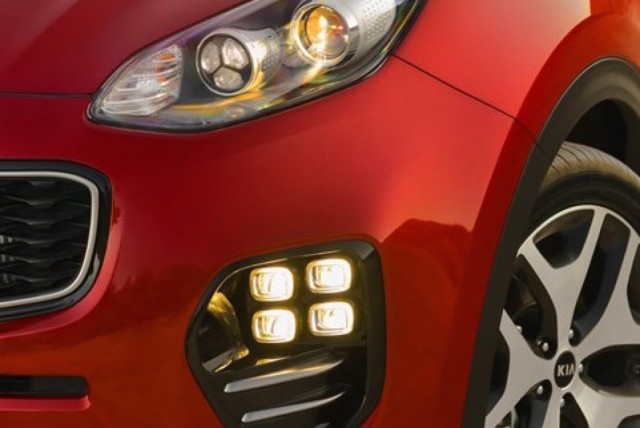 Is the Sportage’s more flamboyant front-end styling a smart move, too? While the jury’s still out on that one, Kia has said that the look has tested out really well in clinics. The voluptuous profile and sheetmetal detail, as well as the expression in the hoodline, all come together nicely, but there’s an almost over-the-top sci-fi level of crisp detail here with the “ice cube” fog lamps, and the headlamp bezels.

You'll find much more in our full review of the 2017 Kia Sportage, including its accommodations, features, and value for money, which is of course impressive here. It's just started to arrive at U.S. dealerships and has a starting price just below $24k.

In this case it looks like Kia most definitely didn't get the hand-me-down; waiting and taking a different road will probably prove a smart move.