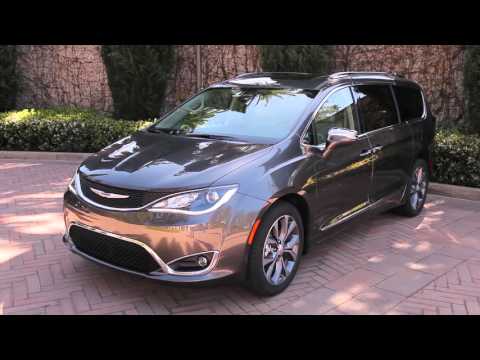 Minivans were invented in the 1980s, and since then, they’ve have had a certain…reputation.

Call them big-box bores. They’re functional to a fault, but sporty? Sexy? Not so much.

Leave it to Chrysler to try and change that reputation. They invented the minivan. They've sold hundreds of thousands of them in almost every year since.

Now, they’re reinventing the minivan with the 2017 Chrysler Pacifica.

The Pacifica revives a name Chrysler used to apply to a crossover wagon it sold in the last decade, but make no mistake. This one’s entirely new, and it has nothing in common with the old Town & Country or the Dodge Grand Caravan. It rides on a completely new platform, and has a great new look that gives away its freshness.

The front end has a slim, sleek nose like the one on the 200 sedan. The side glass is trimmed in bright metal—it doesn’t try to hide its size with visual tricks. The rear pillars kick back with a relaxed style. The sliding doors cover their tracks under the rear windows.

Inside, the Pacifica’s dash wraps beautifully around the front passengers. The sculpted and stitched dash is a far cry from the upright shape of Chrysler’s old minivans. The rectangular and relentlessly boxy shapes are history. The new one is awash in upscale looks and color schemes like "Soho," themed with the color palette of a cigar bar.

The details speak to hours of design attention. The high-resolution infotainment touchscreen is mounted flush with the dash. The thin rim of metallic trim on the steering wheel seems way too swanky for a vehicle doomed to crust up with Happy Meal leftovers.

It's a boon for outward vision, too. The beltline sits low for most drivers. The front pillars tuck inward slightly at the base of the windshield. Visual tricks like those give the impression the Pacifica is smaller and narrower than it is--which is roughly the same as the Honda Odyssey and Toyota Sienna, its chief rivals.

Configure it your way

Being pretty is nice, but a minivan isn’t worth much if it’s not useful. The Pacifica doubles down on its class-leading flexibility and takes a few steps forward from there.

By the numbers, the Pacifica ranks above those other big minivans with enough useful interior space to carry up to eight passengers, or dozens of sheets of plywood, or something in between.

It's no longer shy of space compared to those other vans, and what the Pacifica does with its room makes it far more useful than those vans.

It's a tradition: Chrysler's traditionally offered a cargo/commercial version of its vans, and pioneered stow-away second-row seats with the original Pacifica crossover, itself a spin-off of the company's minivans.

Those two factors echo throughout the Pacifica's cabin. Chrysler’s preserved the fold-away second-row and third-row seats, a key advantage over other minivans. The improvements come in the seats themselves and the ease with which they tuck out of the way.

For the first time in a Chrysler minivan, the Pacifica has what's called Stow ‘n’ Go Assist, which moves the front seats forward, saving some time in the seat-folding process. Once the seats are moved forward, a carpeted panel flips out of the way to expose deep bins that can be used for storage when the seats are in use. A flip of a lever, and the second-row seats fold fully into the floor, requiring just a firm press to latch them into place.

The second-row seats have more padding, addressing one of the few complaints with the setup. They also have a tilt feature that permits easier access to the third-row seat when a child safety seat is LATCHed into place in the second row.

The third-row seat? It’s the best we’ve sampled in minivans. Not only is it easy to climb into, it has enough head room for six-foot passengers, and the seat cushion has real comfort. Because there's no all-wheel-drive option on the Pacifica, the third-row seat can stow completely into the floor, too.

It’s even offered with a power-recline feature—and in some models, it’s surrounded by all kinds of USB charging ports and HDMI inputs for the available rear-seat entertainment system.

Fold all the seats behind the front row into the floor, and the Pacifica can haul lots of 4x8 sheets of construction material. It's possible, even if the plushly finished rear seats on some versions would give most drivers pause.

The 2017 Pacifica features available handsfree liftgate and sliding doors. With the key fob nearby, customers can open and close each of these features by performing a single kicking motion under the bumper or sliding door activation zones and the door or liftgate will open and close.

Elsewhere in the Pacifica, thoughtful touches abound. The center console can hide iPads, while gallon jugs of milk have their own storage bins in back. Every seat has at least one cupholder. In eight-passenger versions, the eighth seat (middle, second row) is removable and doubles as an armrest when not used as a chair.

A three-pane panoramic roof opens up the entire vehicle to natural light--perfect for sightseeing tours. The Pacifica also has an available Stow ‘n Vac system that’s powered by Ridgid and can reach all corners of the interior, even to the vehicle parked next to it in the garage.

Chrysler’s minivans have always brought cutting-edge features to the minivan game, but the Pacifica goes out of its way to entertain passengers. Active noise cancellation cuts interior volumes so the driver can hear clear to the third-row seat. A pair of flip-up 10-inch screens can stream content from Blu-Ray players.

A huge panoramic roof bathes the cabin in light. There’s even a stow-away vacuum with a hose long enough to clean out the car parked in the next space over.

Finally, the Pacifica's accessories list runs the gamut--everything from a pet kennel to a first-aid kit to a DVD player to wireless smartphone charging.

Where the old Chrysler minivans fell behind were in safety and performance. The new Pacifica hasn’t been crash-tested yet, but it’s built on a new architecture that Chrysler fits with features like adaptive cruise control, forward-collision warnings with automatic emergency braking, and available surround-view cameras.

Drivers have an expansive view of the road ahead and of other obstacles from the Pacifica's driver seat. Vision to the rear quarters is excellent. The sliding side doors sit on low hinges, with a section of glass above the hinge that eliminates most blind spots. Even so, blind-spot monitors are available.

Drivers who have late-model luxury vehicles in the household will be happy to note that the Pacifica now includes things like parallel and perpendicular park assist, and a lane-departure warning system that nudges the vehicle back into its lane when it detects it's crossed the lines.

The Pacifica saves some its best surprises for last. Press its pushbutton to start, spin the rotary transmission control into D--or L--and the Pacifica responds smartly, whether it's in acceleration, fuel economy, or ride and handling.

The Pacifica, in fact, has vaulted past its most talented rival in road manners. The Honda Odyssey is pending a major redesign--but for now, the new Pacifica outpaces today's Honda van.

Chrysler's minivan shows how a new platform and new drivetrain can advance even a minivan in the eyes of enthusiastic drivers. It accelerates strongly and smoothly, with a crisp V-6 punch and 287 horsepower. This newest version of Chrysler's core V-6 engine is lighter than the outgoing version, and is 5 percent more efficient, Chrysler says.

The engine's now paired to a 9-speed automatic. Other Chryslers with small-displacement engines have had drivability issues with their new 9-speeds, but not the Pacifica. It has almost none of the jerky shift action we’ve found in those compact installations. There's no direct control of gears, however.

Fuel economy is near the top of the class. The EPA rates the Pacifica at 18 miles per gallon city, 28 highway, and 22 combined. That's surpassed by the current Honda Odyssey's 23 combined. The Nissan Quest nearly matches it as well. Still, the Pacifica's made substantial progress, with its lighter body, active aero grille shutters, and, later this year, with stop/start.

Its next big drivetrain step will put it in the minivan fuel-economy lead. Later this year, the Chrysler Pacifica Hybrid arrives with a 16-kwh lithium-ion battery pack mated to two electric motors and an electrically variable transmission. The plug-in Hybrid will be capable of going around 30 miles only on electric power and should be rated at around  80 MPGe in city driving.

In the meantime, the Pacifica responds impressively when pushed to limits it'll never encounter with a baby on board. Handling is far above that of a typical minivan. Hefty steering keeps it tracking straight on highways, and the suspension mutes most road surfaces with a composed feel. There's a pleasant growl from its V-6 engine, and it tracks down the interstate with precise feel.

Hustling the Pacifica through one of our favorite California canyons made it clear: there are decades of progress baked into this minivan’s hardware, even if performance isn’t what most buyers put at the top of their must-have list.

Shift it into its low gear range, and the Pacifica's balanced ride feels more in control than, say, the new Honda Pilot. It controls wheel bounding very well--unlike the Dodge Grand Caravan that will remain on sale for the near term-- and the steering winds and unwinds naturally into corners. A brand-new, sturdy body structure that's much stiffer than the outgoing vans gets much of the credit.

The only miscue on the early-build van we drove was brake pedal feel. Too shallow and too hard, it needs more gradual response to feel like it's part of the well-woven systems that make the Pacifica feel happy to push its limits.

Priced from just under $30,000 to more than $42,000, the Chrysler Pacifica goes on sale in the summer, with the plug-in hybrid model set to arrive late in the year.

The lineup will include LX, Touring, Touring-L, Touring-L Plus, and Limited models--all built in Windsor, Ontario, right across the river from downtown Detroit.

The bottom line? If there ever was a time to get excited about owning a minivan, it’s now.