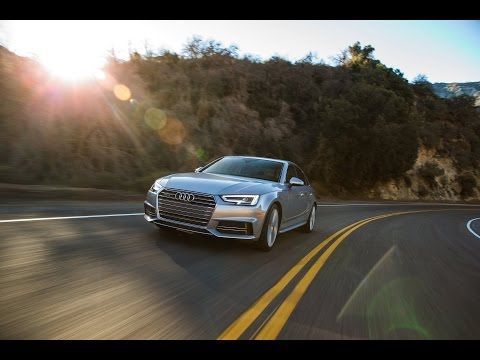 The sport-sedan niche is full of great cars. It’s not just a 3-Series game anymore, not with the ATS, the C-Class, and the Q50 grabbing plenty of laurels of their own.

Count the 2017 Audi A4 in that crew, too. Over the past decade, it’s gained a luster all its own, with taut styling, good road manners, and lots and lots of technology.

Will a new generation keep the kudos coming? We think so, now that we've driven the A4 in Europe and on American roads.

The new A4 arrives just as its sport-sedan niche is exploding with exceptional new nameplates--many of them lacking the broad appeal of today's Audi emblem.

It's extraordinarily competitive, and the new Mercedes C-Class in particular has eclipsed some of the newer arrivals with its available air suspension and turbocharged engines, not to mention one of the most attractive interiors of any vehicle.

With the new A4, Audi isn’t tinkering much with its formula. The A4 has an aero-clean shape, a crisped-up take on its enduring shape. It’ll take a knowledgeable eye to spot the new car—it’s a bit bigger, the front end wears a few more creases, and the rear end sits a bit higher. It’s no reinvention, but the A4 has always leaned toward long-lasting style.

The cockpit is part throwback, part future-think. The horizontal dash and toggle-switch controls remind us of the spartan look of Audi’s great Eighties sedan, the 4000. That is, until you get to the big display screen fixed to the dash, to the rich combinations of wood and leather, and to the dazzling display embedded where the gauges normally live.

Audi calls it the “virtual cockpit.” It’s a dramatic tech flourish that replaces dials with digital output. It can switch from instruments, to infotainment, to wide-screen navigation with Google Earth maps.

The virtual cockpit can be distracting at first—but there’s no doubt it’s a stunning calling card Audi has all to itself.

For performance, the new A4 leans on a turbo 4-cylinder. It’s a 2.0-liter unit rated at 249 horsepower and 272 pound-feet of torque. It’s coupled to a seven-speed dual-clutch transmission and a choice of front- or all-wheel drive.

The new powerplant teams well with the lighter-weight A4. Down about a hundred pounds, the car launches with gusto and with a pleasant inline-4 sound. Zero to 60 mph times are quoted at 5.6 seconds—a figure we’d expect from the supercharged V-6 in the S4 that’s coming soon.

The A4 makes the most of its strong drivetrain, with a suspension that gets available adaptive dampers for the first time. With variable electric steering, a choice of driving modes from economy to Sport+, and those adaptive shocks, the A4 cuts cleanly through corners.

It’s composed, and responsive—and if you want to dial up the sporting side of the equation Audi offers an S-line package with more intense wheel-and-tire choices. We spent an afternoon hustling the A4 through some favorite winding roads outside San Diego, and the adaptive-suspension S-line car responded just as we'd expect. Acceleration is very brisk, the ride is very well-damped, and in general, the A4 drives with an engaging feel that once was only available up in S4 trim.

With its new body, the A4 delivers better comfort and space for as many as five adults. About an inch longer and a half-inch wider, the A4’s now a true mid-sizer, and it’s about as spacious as the bigger cars in its niche—the 3-Series in particular.

The front seats have excellent shape and bolstering, but the A4 makes bigger gains in the back seat. The prior version had a low, short seat cushion that didn’t fit tall passengers well. The new A4? It matches great back-seat space with a better back bench. Finally, six-foot passengers can sit behind six-foot drivers, without complaint.

The A4 hasn’t been crash-tested yet, but the available safety gear reaches deeply into the tech parts bin. There are forward-collision warnings with automatic emergency braking; blind-spot monitors; lane-keeping assist; adaptive cruise control; and stop-and-go feature that lets the A4 follow the car ahead safely at speeds of up to 40 mph. It’ll even warn you if you attempt to turn into oncoming traffic.

Next-generation connectivity is baked into the A4, too. Virtual cockpit aside, the A4 now links effortlessly to smartphones, has a touchpad that accepts handwritten input, and can be fitted with an on-board, high-speed data connection.

So what’s the bottom line with the 2017 Audi A4? It’s burnished its sport-sedan credentials, but it’s the technology that takes it to a new level.