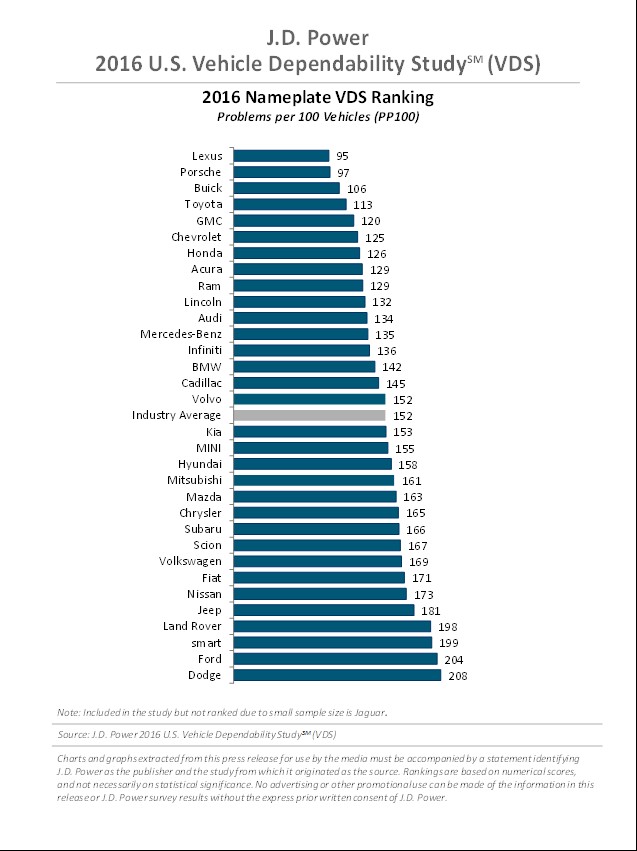 J.D. Power has unveiled its 2016 Dependability Study, and while some of the findings seem unsurprising, the study's brand rankings hint at interesting changes.

Power's Vehicle Dependability Study is one of the company's best, gathering a wealth of information about vehicles during their third year on the road. The 2016 Study focused on vehicles from the 2013 model year, cataloging problems that 33,560 original owners experienced during the previous 12 months. Responses were fielded between October and December of 2015.

Year three is an interesting one for vehicles: they're no longer considered "new", but they're too young to experience the serious issues that can affect older vehicles. Also, many are still covered by warranties, which means that owners are more likely to have problems fixed, giving J.D. Power more accurate info about those vehicles in the process.

Power tabulates scores for its Dependability Study base on the number of problems recorded per 100 vehicles (PP100). Power also groups those problems into categories to provide a sense of where shortcomings and successes can be found. The 2016 study tracked a total of 177 specific problems, which were lumped into eight categories.

The biggest finding of the 2016 Dependability Study's isn't all that big -- at least not to those who follow these sorts of things. According to Power, in-car technology like infotainment and navigation systems continue to have the biggest negative impact on dependability. That's something we've seen since at least 2011, when Ford's initial quality scores tumbled because of its dodgy MyFord Touch and SYNC systems.

Issues with audio, communication, entertainment, and navigation technology -- which Power shortens to "ACEN" -- accounted for 20 percent of all problems reported by participants on the 2016 Dependability Study. That helped drive an increase in visits to dealerships and caused problems per 100 vehicles to jump from 147 PP100 in 2015 to 152 PP100 for the 2016 study -- an increase of three percent.

CHECK OUT: Takata's Exploding Airbags Finally Explained (No Thanks To Takata)

The biggest problem reported by study participants? Pairing a vehicle's ACEN system with a smartphone, using Bluetooth. Voice recognition software glitches were a close second. And navigation glitches were a source of many, many headaches.

Why are technology problems on the rise? Power's Renee Stephens says that not only are tech issues lingering over the lives of vehicles, but as today's cars become more reliant on such technology, more owners are experiencing problems: "Usability problems that customers reported during their first 90 days of ownership are still bothering them three years later in ever-higher numbers. At the same time, the penetration of these features has increased year over year."

That could cause problems down the road by diminishing consumer confidence in autonomous cars. The number of high-profile recalls we're seeing these days isn't helping either.

The good news? Power says that some conventional mechanical problems are shrinking. In fact, the number of engine/transmission issues fell from 26 PP100 in 2015 to 24 PP100 in 2016.

For the fifth year in a row, Lexus was tops in Power's dependability rankings. However, from there on down, the scores spread fairly evenly -- far more evenly than just two years ago, when only three Detroit brands scored better than the industry average.

As you can see from the graphic above, Power's 2016 study saw 16 brands beat or meet the 152 PP100 average. Among them were six Detroit brands, five Asian brands, four European brands, plus Volvo (which could theoretically be Asian or European, depending on how you think about such things).

In the bottom half, there were surprises, too. Though Fiat Chrysler vehicles often vie for the lowest rungs in these studies, one of FCA's brands -- Ram -- scored well above the average, and the remaining four were spread from the midpoint down. (Although Dodge did land in last place.) Of the 16 brands on the dark side, seven were Asian, four were European, and five were American.

The segment-by-segment awards were equally well dispersed. As you'll see from the charts in the slideshow above, a total of eight GM models came out on top, including the Buick Encore, Buick LaCrosse, Buick Verano, Chevrolet Camaro, Chevrolet Equinox, Chevrolet Malibu, Chevrolet Silverado HD, and the GMC Yukon.