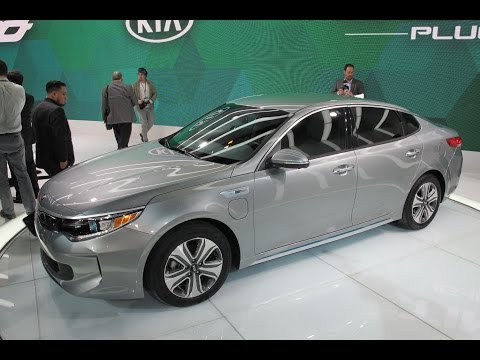 Kia says it wants its cars to be far more efficient by the year 2020, and the Optima Hybrid is one way it's chasing higher fuel economy.

The Hybrid is actually two models--one a gas-electric sedan, one that also adds a plug-in option.

They share the same 154-horsepower 2.0-liter four-cylinder engine, and a six-speed automatic. But the plug-in hybrid gets a bigger battery to store energy (9.8 kilowatt-hours, versus 1.6) and as a result, a 27-mile all-electric EPA rating.

The Optima Plug-In Hybrid offers a choice between an all-electric mode, a hybrid mode that saves electric charge, and a charging mode, which charges the battery pack. The batteries can be charged in under 3 hours on a 240-volt Level 2 line.

We've driven the similar Hyundai Sonata Plug-In Hybrid, and based on that, the Optima Hybrid should benefit from big improvements in the hybrid system’s smoothness and efficiency.

Both Optima Hybrids blend right in with the Kia lineup. They're almost indistinguishable from other Optima sedans, except for a few aerodynamic tweaks. But plug-in Optimas will get some special features, including a remote app that lets drivers check the battery's charge level.

Apple CarPlay and Android Auto will also be included, and advanced safety features will be optional, as will a 10-speaker, 630-watt Harman/Kardon surround-sound audio system

There's no official EPA rating yet or pricing, but the Optima Hybrid goes on sale later this year.