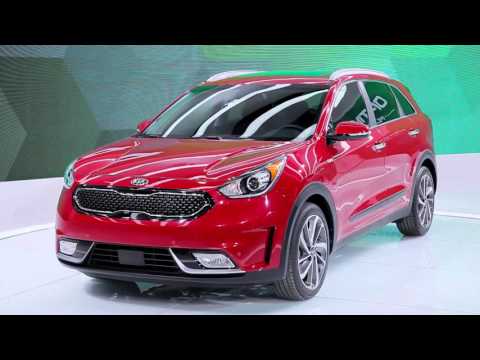 Small-SUV shoppers have never had more choice. The streets are practically teeming with new utility vehicles like the Honda HR-V, the Jeep Renegade, and the Mazda CX-3.

But what if you're also looking for a utility vehicle without the all-wheel drive, and with hybrid power?

At the 2016 Chicago auto show, we took a first look at a vehicle that answers all those questions and needs--the 2017 Kia Niro.

The Niro is brand-new for 2017, and it shares some of its running gear with another hybrid we'll see later this year--the Hyundai Ioniq. It'll be Kia's first vehicle sold only as a hybrid, with a plug-in hybrid version to come.

That will make the Niro the only dedicated hybrid crossover SUV on the market. Other hybrids like the Subaru Crosstrek and Toyota RAV4 Hybrid also have gas-powered counterparts.

The Niro gets power from a 103-horsepower, 1.6-liter four-cylinder, running on a lean cycle and teamed with a six-speed dual-clutch transmission. There's an electric motor sandwiched between the engine and gearbox, and a 1.6-kilowatt-hour battery under the rear seat. Net output is set at 146 horsepower.

The bottom line for fuel economy? Kia is targeting an EPA rating of 50 mpg combined, an aggressive figure for a vehicle with more of a crossover look, and capabilities greater than those of your average hatchback.

All-wheel drive will not be available for the Niro. It's usually a requirement in cold-weather states for anything considered a crossover or SUV, but buyers in this niche often look more for the shape and utility of the vehicle versus its hardware. Witness the Kia Soul, the non-hybrid hatchback that will sit directly across the showroom from the gas-electric Niro.

Like the Soul, the Niro has been developed with no pretense of off-roading. It's focused instead on urban utility, and on ease of use.

To that end, Kia promises sporty handling with the Niro. It's gone out of its way to describe how "normal" it drives.

We'll be the judge of that--and soon. Pricing hasn't been announced, but the Niro goes on sale late this year. Stay tuned for a first drive.