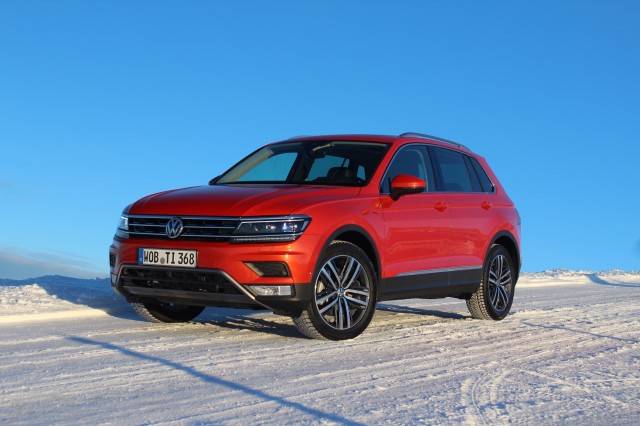 The 2018 Volkswagen Tiguan is nearly 18 months away from its on-sale date in the U.S. Yet up north near the Arctic Circle, in Arvidsjaur, Sweden, this past week, we got just enough of a tease to know that this one’s going to be different.

In addition to becoming, for the U.S. market, an entire size larger than the current model, all 2018 Tiguan models with four-wheel drive will include a terrain-based multi-mode selector, with a dedicated Snow mode and two Offroad modes, including user-customizable settings for powertrain behavior, suspension, steering, and more.

ALSO SEE: Toyota Pulls The Plug On Scion, But Why?

And we got to put it to the test. Over a combination of ice-glazed two-lane highways, snow-packed back roads, and a vast frozen lake that’s used for cold-weather testing, we had plenty of opportunities this week to experience the new engineering, and the slew of new electronics and chassis systems that are going into the Tiguan.

As well, we managed to come away with some preliminary impressions of this next-generation Tiguan—most notably, that it’s going to be a heck of a lot better as a go-to family wagon.

The Tiguan is the first utility vehicle to be built on Volkswagen’s MQB architecture, a set of modular underpinnings that constitute the basic structural layout and chassis underpinnings for most of the automaker’s highest-production-volume vehicles for the next few years.

READ: Bosch Has A New Gas Pedal That Could Make Your Car More Fuel-Efficient (And Smarter, Too)

These MQB underpinnings help make the automaker’s vehicles lighter and more fuel-efficient, as well as safer, more flexible for powertrains, and easier to build.

Arriving later for the U.S., but super-sized

The latter, by the way, is primarily why we’re not getting the new Tiguan in the U.S. until summer 2017—in anticipation of expanded production facilities for it at VW’s complex in Puebla, Mexico, as well as the debut of the stretched (extended-wheelbase) version that will be assembled there for our market.

That version we get is expected to be about 3.5 inches longer in wheelbase, and nearly five inches longer than the 177-inch length and 105.6-inch wheelbase of the Euro-spec versions we drove.

That combined nearly seven inches in additional length and roughly 6.5 inches of wheelbase at last catapults the Tiguan wholly into the fiercely competitive compact crossover segment that includes the Honda CR-V, Toyota RAV4, Ford Escape, and Subaru Forester, among many others. It’s been a hotbed of sales growth for the U.S. market over the past several years, as families sideline sedans in favor of them; and it’s expected to stay strong.

Up until now, the current Volkswagen Tiguan has been a tweener—never quite intended to be sold in the U.S. market from the start, coming up short in many respects (not just space, but features, ride, and handling) when measured up against some of those key rivals.

The 2018 Volkswagen Tiguan will boast one other advantage over many of its rivals: available third-row seating. While that’ll certainly be a small third row, it could be a key selling point—although we remain curious as to how the three-row Tiguan will fit in alongside the other, somewhat larger three-row SUV that’s also expected next year.

The Tiguan we see will be quite the same to what we drove in many respects, yet quite different in others. It will be pretty closely aligned to the European versions in exterior design, cabin trims, and general features, although we’ll see a slimmed down feature set that won’t include some of the items we experienced in Euro-spec cars—such as the automatic damper control (DCC) and perhaps the excellent (variable-ratio) adaptive variable steering system that helps in tight corners while feeling stable at high speed.

CHECK OUT: Hyundai Adding Up To Four New Crossover SUVs In "Permanent Shift"

The model we drove was powered by a 177-hpversion of the 2.0-liter TSI four-cylinder turbocharged four and VW’s dual-clutch (DSG) automatic. U.S.-spec cars will come with a roughly 183-hp version, paired with an Aisin eight-speed automatic transmission—not a cost-cutting decision, VW officials insist, but one rooted in Americans’ resistance to the more connected low-speed driving qualities of dual-clutch systems. You’ll also be able to get a 2.0-liter turbo-diesel TDI four-cylinder engine, making about 150 hp, although the fate of the Tiguan plug-in hybrid for the U.S. market is yet undecided.

More grown up... yet also sportier

While there’s some yet unannounced for the U.S. variant, the Tiguan impresses as grown-up, more refined, and even sportier versus its predecessor. When pressed to uneasy surfaces and to some rather extreme dynamic maneuvers, there’s a sense of rigidity and solidity in the body, and it follows up on our impressions of the new Volkswagen Golf, which was also built on MQB underpinnings. The Tiguan’s driving position is also far better than that of the current model; it’s not just the few inches of expanded width in the cabin, but also the combination of seat height, adjustability, and instrument-panel placement that altogether make this interior feel more specious, as well as space-efficient.

VW has cut the coefficient of drag in the new Tiguan to 0.31, and that seems to have cut the wind noise you notice within the cabin. And while it was difficult to tell on road surfaces that were everything but the clean-and-dry-or-wet road surfaces that constitute the majority of driving, it appears that there’s a lot more insulation underneath as well.

We’ll get the 12.3-inch Active Info display, which builds on the MIB II interface that VW has introduced across much of its product line this past year; it’s a touch screen that includes proximity sensing, and we like how it’s not needlessly complicated in its menu structure. And in the Arctic winter environment, where temps ranged as low as -22 degrees Celsius by day, we found the tri-zone climate control system strong, and the heated seats and steering wheel plenty effective.

The Snow mode is different than other such snow modes, too. It includes algorithms that help it not only get better traction out of snowy driveways and on straightaways (allowing more wheelspin, until all wheels are slipping) but it’s also at work at higher speeds, to yield better stability in corners (via more stability-control intervention in that case). And in the Snow mode the throttle response is more linear..

In the Offroad mode, the transmission delays its upshifts and hangs in individual gears with manual control. There’s also an “automatic freewheeling” function that completely detatches the engine, while the steerting follows its Sport profile and the suspension goes into its Comfort profile. And hill-start and hill-descent features are on call.

An Offroad Individual mode, meanwhile, can let you manually select the parameters for steering, suspension, and stability systems, among other details. Is it too much for the typical American household just looking to get through snowbanks? Possibly...but it’s nice to know that the potential’s there.

Borrowing from the Golf R

Out on an open skidpad, there’s way more potential than most Tiguan buyers are typically going to tap into. We found that this Tiguan has some of the same dynamic fluency as the Golf R—yet with a no-compromises package that should hit the sweet spot for Americans in a modest mid-size package.

It does indeed borrow some of the robust chassis systems from the Golf R—like XDS, a torque vectoring system that preemptively reapportions torque for a more stable path through corners, and EDS, an electronic locking differential that manages to redirect torque side-to-side, if one wheel starts to spin. The Haldex 5 clutch pack is at the core of this system, able to smoothly send more power to the rear wheels when needed (up to 100 percent, technically, if the front wheels have no traction)

The frozen lake demonstrated that the all-wheel drive system manages to redirect torque with a grace and fluidity that was appropriate for the very limited traction in the surface—enough in reality, on snow, to do some glorious rally-car-style drifts.

But that’s not what matters to the typical Tiguan shopper. In space, versatility, and refinement (hopefully safety, too), the next Tiguan shows tremendous improvement.

Although this preview drive was hardly comprehensive—and the jury’s still out on the exact build and version we get for the 2018 model year—what we see in this new Tiguan is something that, almost unconditionally, will be a far better match for Americans.