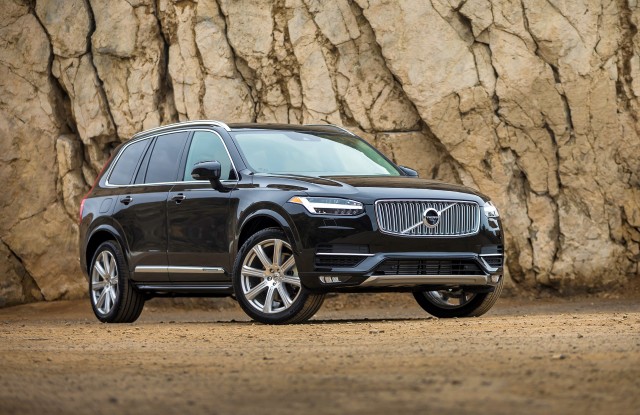 The 2016 Acura MDX and the 2017 Volvo XC90 are both large, seven-seat luxury utility vehicles. They show how far family crossover SUVs have evolved from traditional SUVs, in design, refinement, and features, not to mention active safety, crash testing, and on-road behavior.

The MDX was first launched in 2014, but it gets significant updates its third year—and freshened styling will be coming for 2017 as well. This year's changes include a new 9-speed automatic transmission and more active-safety features. Meanwhile, the big Volvo is now in its second year, with a new base powertrain added at a slightly lower price. (There's also a new, high-end Excellence model with a price tag of more than $100,000.) Each has earned some of our highest ratings among premium SUVs. And the Acura comes in at $5,000 to $10,000 below the XC90 in many trim levels.

So which is the right one for you?

Either vehicle will provide comfortable accommodation for up to seven people. The Volvo is higher on the luxury scale, despite a design that's evolutionary and reserved even for the sensible Swedish brand. The MDX is a sportier drive, and it feels a bit more spacious. Both are good purchases, but the Volvo won our comparison last year for receiving the highest marks from both safety agencies.

Our ratings have changed for 2017, so our scores for the 2016 Acura and the 2017 Volvo can't be directly compared. (Read more about how we rate cars this year.) We'll update this comparison as soon as we've reviewed the 2017 MDX and can compare both cars in the same model year. 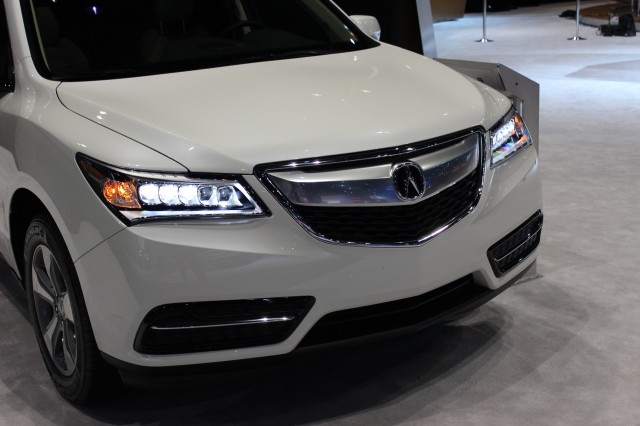 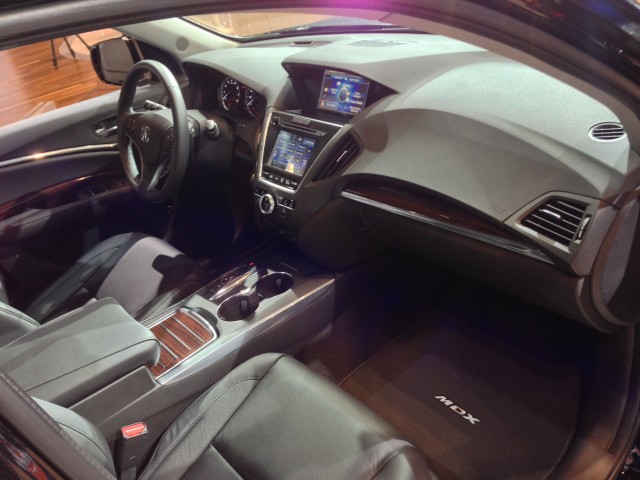 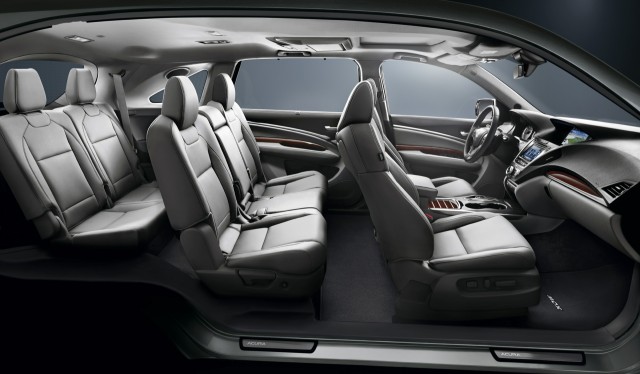 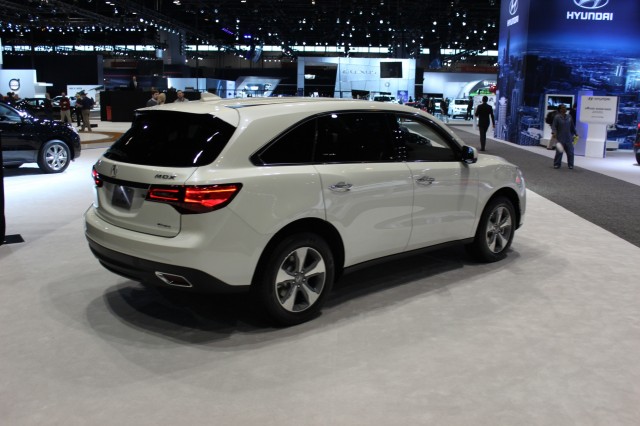 The shape of the MDX is unchanged in 2016, continuing to resemble a sport wagon more than a slab-sided utility vehicle, especially at the rear. The tapered roofline is an MDX hallmark, and the chevron-like chrome strip across the top of the grille and jewel-eye LED headlights in the chiseled front end distinguish it as an Acura.

While the exterior lines of the XC90 instantly say Volvo, it's crisper and more fluid than its predecessor, launched way back in 2002. Its shape also effectively disguises the seven-seat vehicle’s size; the Volvo simply doesn’t look as large as it is. Nor does it telegraph its prestige; as one Volvo executive said, the XC90 is a car for people who “do not look for a brand that defines them.”

Inside, the front-end theme of the MDX is echoed by the dash, which has a V-shaped center stack and sloping, tiered design. The dash design complements the rest of the cabin, and the materials used for interior trim are coordinated nicely.

The MDX is roomy for its class, and the front seats are comfortable, with sporty bolstering and better than average support. The new push-button shifter is intuitive, and frees up considerable space on the center console. 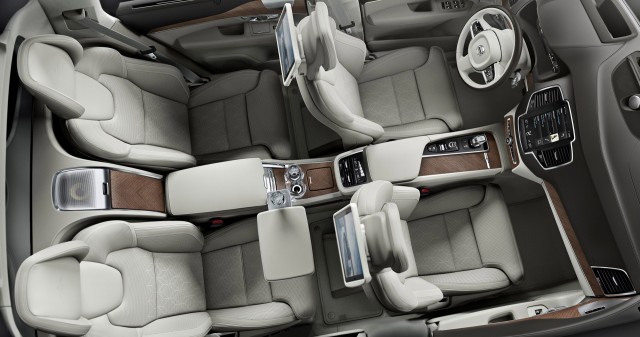 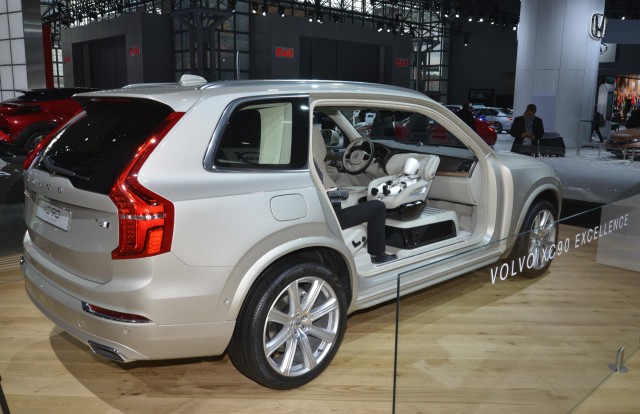 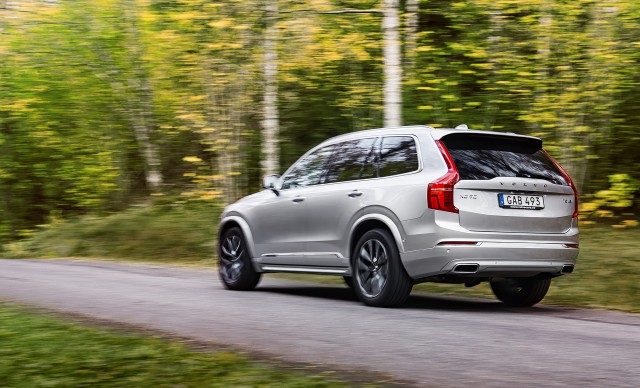 As for the XC90, its luxury is on full display in a widely-lauded interior that distinguishes it from a host of German competitors. The seats are superbly comfortable, and the interior shapes in stitched leather, textured metal, and matte wood are layered to suggest Scandinavian furniture. The 9.0-inch touchscreen in the center of the dash responds quickly to tablet-style commands, and is pleasantly intuitive.

The Volvo's second-row seats slide forward and backward, and the third row will accommodate two adults if they bargain for leg room with second-row riders. Theater-style seating means each row is slightly higher than the one in front, and outward vision is excellent —aided by large windows and the huge panoramic sunroof that’s a standard feature.

The Acura MDX is powered by a smooth and refined 290-horsepower 3.5-liter V-6 engine that drives the front wheels through a new 9-speed automatic transmission. All-wheel drive is optional. The new gearbox cuts 0-to-60-mph acceleration by half a second, but it wasn't as smooth or seamless as we expected. And it doesn't improve fuel economy, which remains at 22 mpg combined for front-wheel-drive models and 21 mpg with all-wheel drive (AWD). The MDX remains one of the better-handling large SUVs we've driven, with a Sport setting to quicken steering response, and a Comfort setting for lighter steering feel.

A new base Volvo XC90 is added for 2017, known as the T5. It has a 250-hp turbocharged 2.0-liter 4-cylinder engine, an 8-speed automatic transmission, and front-wheel drive as standard (with the option to add all-wheel drive). But Volvo expects the bulk of its sales to come from the T6 version, with the same engine rated at 316 hp due to the addition of a supercharger as well as its turbo. AWD is standard on the T6, and fuel economy is rated at 22 mpg. On the road, the XC90 handles like a car, with good steering feedback, predictable roadholding, and sprightly performance despite its small engine. A plug-in hybrid variant that will sell in lower volumes can run on its gasoline engine, on a 60-kilowatt (82-hp) electric motor on the rear axle, or on both together when needed.

Both vehicles get excellent safety ratings from the IIHS and have already been dubbed Top Safety Pick+ winners. The Acura also gets the top five-star overall rating from the NHTSA—same goes for the Volvo. Both vehicles also have a full suite of electronic active-safety systems.

The XC90 ranked well when comparing 2016 models primarily for its handsome style and appealing interior. Both SUVs are supremely safe—by crash testing standards—and are relatively equal on fuel economy, provided you don't splurge for the pricey plug-in Volvo. (Read more about how we rate cars.)

In the end, the Acura is a bit less expensive, somewhat sportier, and a perennial favorite among premium seven-seaters. The Volvo is more luxurious and has a nicer interior, as well as a plug-in hybrid option. Either car is a good choice, in our view, and which one you choose may come down to balancing cost, luxury, and practicality.

8.6
Expert Rating
The 2016 Acura MDX remains one of the best luxury three-row SUVs, but the benefits of its new nine-speed automatic are unclear.
7.3
Expert Rating
The 2017 Volvo XC90 is comfortable, capable, and only whispers its virtues—reinterpreting the Volvo brand as quiet sophistication in comfort, style, and efficiency.

7.0
Expert Rating
The MDX is styled more like a sport wagon than an SUV. It's attractive, if a little anonymous.
Read More
8.0
Expert Rating
The 2017 Volvo XC90 is elegant but low-key on the outside, but its interior uses simple Scandinavian design and elegant materials to redefine luxury in a soothing, sensible way
Read More

8.0
Expert Rating
Responsive handling is a hallmark of the MDX, but we're not completely sold on its new nine-speed automatic.
Read More
7.0
Expert Rating
The 2017 Volvo XC90 uses two types of boost to wring good power out of a small engine, while its on-road behavior is car-like—which is remarkable for a seven-seat SUV
Read More

9.0
Expert Rating
The MDX has exceptional comfort for its three rows of passengers; space is excellent and so is refinement.
Read More
7.0
Expert Rating
The 2017 Volvo XC90 holds seven adults, has comfortable seats and uses high-quality materials, and is smooth underway, let down only by more noise than competitors
Read More

9.0
Expert Rating
Multi-view cameras, stop-and-go adaptive cruise control, and streaming audio are just a few of the features the MDX has to offer.
Read More
8.0
Expert Rating
Against German competitors, even the $50,000 base model of the 2017 Volvo XC90 is well-equipped; luxury, sporty, and plug-in hybrid versions broaden the range
Read More

6.0
Expert Rating
The new 9-speed doesn't boost fuel economy, but the MDX already was one of the more efficient three-row SUVs around.
Read More
6.0
Expert Rating
The 2017 Volvo XC90 gets decent fuel-economy ratings from its small engine, and it's the sole seven-seat SUV that offers a plug-in hybrid model
Read More

Front Wheel Drive Read Full Specs
Front Wheel Drive Read Full Specs
Compare Free Dealer Price Quote
With competitive price quotes from multiple dealers, you will be prepared when you meet your local car dealer. Please tell us how to contact you so that dealers can compete for your business!
2016 Acura MDX
There are no Acura dealers in our network that are located near the ZIP code.
2017 Volvo XC90
There are no Volvo dealers in our network that are located near the ZIP code.
Thank you!
We have sent your request for price quotes on the 2016 Acura MDX and 2017 Volvo XC90 to the dealers you requested. They should be in touch shortly.
The Car Connection's dealer quote process is powered by our partner site CarsDirect.
Your request for a fast, free price quote on a 2016 Acura MDX and 2017 Volvo XC90 is in process. The CarsDirect Dealer(s) listed below will contact you shortly to discuss your request and to provide a quote. If you have questions now, you can contact the dealer(s) directly using the information provided below or contact CarsDirect's award-winning customer service team at 1.888.CarsDirect (1.888.227.7347) or [email protected]
For your reference, your customer transaction number is .
Tell us a little bit about yourself
Looking for dealers in your area...

*As configured. Excludes taxes, title, license and other customary fees, such as dealer documentation fees, tire and battery disposal fees and, where applicable, finance charges. By clicking on “Get Your Price Quote Now”, you agree to our Terms of Use (including the Supplemental Terms) and Privacy Policy. You further consent to being contacted at the number you provided by CarsDirect and certain participating automotive dealerships, which may include autodials, text messages, and/or pre-recorded calls; this consent is not a condition of purchase or service. Message and data rates may apply.
Have feedback about this experience?
Let us know.
Tags:
2017 Compare Cars Volvo News Volvo XC90 News
2021
The Car Connection
See the winners »
2021
The Car Connection
See The Winner and Nominees »