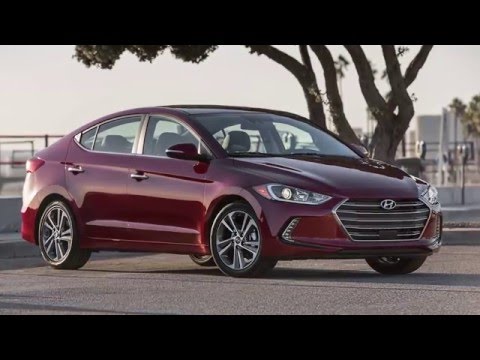 The Hyundai Elantra has been a big success story for the South Korean automaker. A decade ago, it wasn't even mentioned in the same breath as Civic and Corolla.

Today, it's one of the highest-rated small sedans at The Car Connection, in league with the brilliant new Honda Civic, the Ford Focus, the Mazda 3, and the Subaru Impreza. In large part, that's due to edgy styling, a spacious cabin, good crash-test scores and a strong set of standard features.

So what happens when Hyundai changes up its winning formula? We found out when we went to San Diego last week a first drive of the 2017 Hyundai Elantra.

Hyundai made styling a calling card with the last Elantra. This time it's smoothed out a lot of the brash details, just like it did with the latest Sonata.

The new Elantra has more presence, with a wider and deeper grille, but it's also simpler and cleaner and less interesting past its handsome front end. The C-shaped cut lines at the rear doors are muted, the kicky roofline and side sculpting have been tamed, and the roof blends into the rear fenders in a more straightforward way--the same way the same pieces intersect in a Chrysler 200 or a Ford Fusion.

The details that work better on this Elantra include new air intakes at the front corners to smooth airflow around the tires. They're slits that tuck in along available LED daytime running lights in attractive bracket shapes. The doors have a deep shoulder line that contrasts nicely with the swell of the fenders--it's a look Acura's worn before, but the Elantra wears it better.

A trio of LED taillamps per side progress from center to side in a subtly changed pentagonal shape. It reads like a Mensa test where you're supposed to predict the next shape.

Inside, the Elantra's cabin is a dead ringer for the one in the latest Sonata. It's built along horizontal themes, with a large space reserved under a simple dash hood for a touchscreen, canted slightly toward the driver. The very appealing hourglass shape from the last Elantra has been wiped clean in favor of this subtly European treatment.

The new Elantra definitely has a more subdued cabin, but has a more substantial feel that comes from the pared-down design. There are big panels of hard plastic across the dash and doors, with softer materials placed at touch points for the driver and passengers.

For small-item storage, there's a deep covered bin in front of the shift lever, where power ports, aux jack and USB live. Two cupholders sit toward the back of the center console, next to the handbrake.

Slightly more spacious than before, the Elantra is roughly the same size as Honda's new Civic--and both actually mid-size cars if you go by the EPA's classification system.

The overall length of 179.9 inches is up by 0.8 inches, and wheelbase of 106.3 inches is unchanged. The new Elantra is an inch wider than before, at 69.9 inches. Curb weight ranges from about 2,800 to 3,000 pounds. More than half the body is made from high-strength steel, and the new Elantra is about a third stiffer than the previous car, which can contribute to a quieter ride and better handling.

The largely unchanged interior space means excellent front seat room even for bigger drivers-- and better seat comfort too, with more bolstering on the bottom cushion. The low side bolsters are almost identical to those in the bigger Sonata.

The back seat has better room than a lot of rivals. The seats aren't shaped quite as well as those in front, and the bottom cushion is slightly low, but knee and headroom are ample enough for adults. Anyone under six feet tall should fit just fine, even with the available sunroof--its housing doesn't intrude on rear-seat head space.

For storage, the Elantra's trunk has 14.4 cubic feet of space that's usefully shaped, with a low liftover access. The rear seats have a section that folds down for long objects to be loaded through the trunk to the passenger space--and a hands-free trunk lid opens with the wave of a foot under the rear bumper.

Quality perceptions are a wash in the new Elantra versus the last model. The new car has a lot of black plastic trimming the doors, the carpeting on the package shelf is a bit furry, but the doors close with a solid, satisfying noise and a lack of flutter.

More expensive versions also have more sound damping. For an economy car, the Elantra is pretty quiet inside, even under full throttle. However, not all Elantras get all the available sound-damping features, like a hood insulation panel and sound-deadening material in the pillars, fenders, and floorpans. Hyundai didn't provide a base model for comparison.

What's the new Elantra like to drive? It's the Sonata story all over again. What it gives up in slick styling hooks, the Elantra gains in smoothness and comfort.

Power comes from a 2.0 liter four-cylinder with 147 horsepower and 132 pound-feet of torque, delivered through a six speed automatic and tuned for better fuel economy. With the automatic, the Elantra earns EPA ratings of 29 city/38 highway/33 combined in SE trim, or 28/37/32 mpg in Limited versions.

A six-speed manual is offered on the Elantra SE, but it's expected to consume only a very small slice of American sales. Its fuel economy is 26/36/29 mpg.

In the Elantra Limited, acceleration is moderate but the new four-cylinder engine doesn't mind revving near its redline to extract that power. The automatic doesn't have paddle shift controls, so for manual style gear changes, you have to move the console lever.

There's also an Eco model with a 128-horsepower turbo four with 156 pound-feet of torque, and a seven-speed dual-clutch transmission. It's said to match the Honda Civic's 35 miles per gallon EPA combined--but will be a mid-range model, while all CVT-equipped Civic sedans hit that number.

Compared to the Focus or even the Honda Civic, the Elantra doesn't make sporty road manners a priority. It lets the drive choose from Eco, Normal, and Sport tuning for the steering, transmission, and throttle--but it's telling that the normal mode, overall, feels best suited to its new levels of refinement.

We'd like to be able to choose modes for different functions, because the Elantra's throttle and transmission wake up once Sport is selected. In Normal, the transmission is reluctant to downshift--and in Eco, it's adamantly opposed to it unless you really hammer on the issue.

The steering setup we prefer is Normal mode. Though it still suffers from some of the light wandering on highways we've felt in Elantras since 2012, it's more natural in feel than the Sport mode, where a uniform heavy weight is applied no matter what speed or angle is dialed in.

The stiff new body of the Elantra makes itself known in ride quality. With a redesigned suspension, this Elantra tackles the sometimes brittle ride of the previous car, and delivers one of the smoothest rides in the segment.

With basic McPherson front struts and a torsion-beam rear axle, a more vertical shock position and more absorbent material for bushings, the Elantra has a composed response to bumps. It's not overly firm even on the Limited's 17-inch, 45-series tires. It's supple, and much closer to the ideal set by the Civic Touring and most of the Golf lineup.

Whether it comes to powertrain performance, or ride and handling, the Elantra's made the same leap of substance we observed in the current Sonata. It doesn't beg to be thrashed like a Mazda 3--but the Elantra doesn't punish you for choosing a back road over a freeway.

There's no crash-test data yet but Hyundai is aiming for top ratings from the IIHS and the NHTSA. All versions come with stability control, a driver knee airbag, and a driver-side blind-spot mirror. A rearview camera and blind-spot monitors are standard on the Elantra Limited, and available on the base SE trim.

Other advanced safety options on the Limited include adaptive cruise control, lane-keeping assist, blind-spot monitors, and forward-collision warnings with automatic braking and pedestrian detection. That package is not available on the Elantra SE.

Hyundai also omits Apple CarPlay and Android Auto from the base audio system, but just above that it works on both the 7-inch touchscreen audio display and the 8-inch screen that hosts the Elantra's optional navigation system. The Elantra can be outfitted with two USB ports, so that one can be dedicated to phones running through either of those interfaces.

Priced from about $18,000 including destination, the new Elantra comes standard with power features, cruise control, and air conditioning. The Elantra SE also has 15-inch wheels; a six-way adjustable driver seat; cloth upholstery; tilt and telescoping steering; and an AM/FM/XM/CD audio system with six speakers. With the automatic, the price rises to just about $19,000.

Options on the Limited include navigation with Google destination search; Infinity premium audio with ClariFi (it restores some of the waveform lost to audio compression across a number of audio types); BlueLink telematics services; heated rear seats; a power sunroof; and the advanced safety technology features. Fully loaded, the Elantra will be priced from about $27,500.