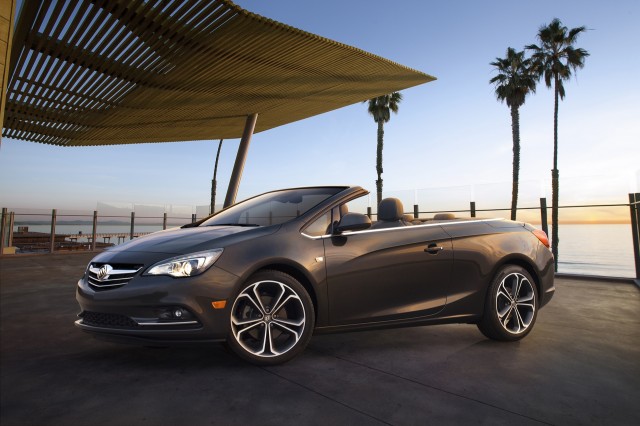 ​
It’s been 25 years since Buick last had a convertible in its lineup. You’ve probably forgotten the Reatta, right?
It's okay. The Reatta was a set-up, anyway. It was supposed to be Buick's halo car--in-dash CRTs and "Reatta Craft Centre" assembly line and all.
Chalk all that up to brave talk. The Reatta wasn't a halo--it was balm for the post-partum depression that set in after Buick axed the Grand National. And it only lasted three years.
ALSO SEE: Fiat Chrysler Kills Chrysler 200 & Dodge Dart, Puts Brakes On Alfa Romeo, Ramps Up Jeep
Now Buick wants you to drop the top again, with the first four-seat convertible GM's ever imported from Poland: the 2016 Buick Cascada.
(By the way, that's pronounced "cass-KAH-duh." Not "cass-KAY-dah", because GM apparently doesn't want every owner to sound like they're from the UP, or on the way to the cottage for the weekend.)
The Cascada is no halo car. Thank goodness. It has an actually attainable mission: to be a really nice convertible. Not a brittle-riding sports car, nor a folding-hardtop service nightmare.
You know--Midwestern nice. The real thing.
The clouds are parting just in time for the Cascada's arrival. It hits the streets this spring, with most potential rivals either gone or on their last tire rotation. The Eos and the Chrysler 200 convertible have been given the pink slip, preceded in retirement by the Pontiac G6, the Toyota Solara, the Volvo C70.
CHECK OUT: 2016 GMC Sierra All Terrain X: A Stylish, Monochromatic, Off-Roading Option

The Germans? The Benz SLK/SLC and Audi TT have all but abdicated this price class, with stickers drifting north of $50,000.

There's plenty of space in the world for a vacation-ready convertible that isn't a Mustang or a Camaro or a Miata--and doesn't dream of being one of that holy ragtop trinity. 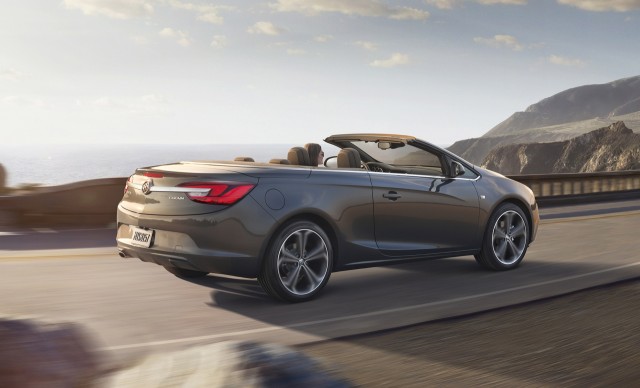 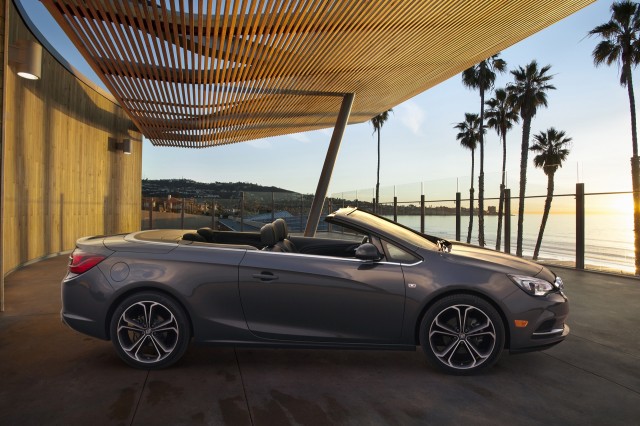 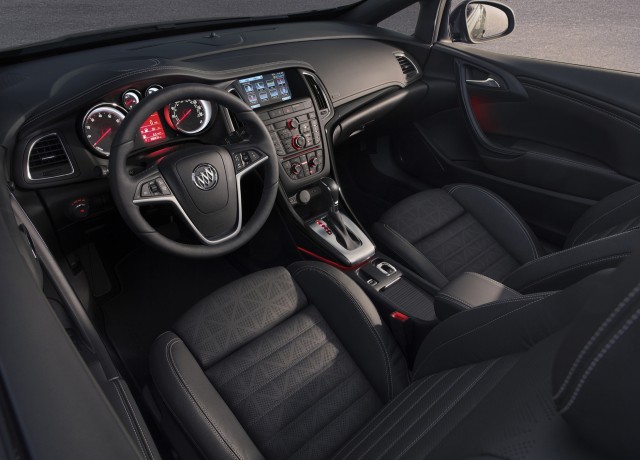 The Cascada does nothing to spoil that opportunity, especially not in styling. There’s nothing too flamboyant about its sheetmetal. It’s just a pleasant, rakish little convertible with some handsome details.

Those details are applied like little grace notes to the Cascada's Euro-sculpted shape. Winged LED running lamps lend it some presence, the taut body picks up a deep crease behind the wheel wells and keeps it going through to the taillamps. A formal touch of chrome rings the cabin and runs across the tail, where the taillamps angle in with a decided German cant.

The Cascada’s interior wraps the gauges and controls around the driver. It ties in nicely with the rest of the Buick lineup with its soft tones and soft-touch surfaces, and little bits of brightwork. It is cluttered with dozens and dozens of buttons and switches, though. The center stack looks like a first draft of the Porsche Panamera's controls--you know, before they edited it down.
That's the flaw that freezes the Cascada cockpit in time, to about three years in the past. It's a very slightly dated look that won't matter at all to the people who've been lost in the wilderness since the Sebring convertible sailed off into the sunset--Gerry Rafferty playlist all cued up, Yelp all opened up to "nearby wine bars," no way to get there.
READ: 2016 Ford F-150 Vs. 2016 Chevrolet Silverado 1500
For them, the Cascada is quick enough, and has the kind of quietly composed road manners that neatly occupy the parking space left behind by the VW Eos.
The front-drive Cascada is powered by a 1.6-liter turbo four, with 200 horsepower and 207 pound-feet of torque (or up to 221 lb-ft in an overboost mode). It's a version of the four-cylinder engine family that powered the last-generation Chevy Volt and Cruze, among others. As a stand-alone piece, it stacks up well against benchmark powertrains like VW's 2.0-liter turbo four, and it's well-behaved for noise and vibration, as most engines its size are.
Shifting is tackled by a six-speed automatic transmission, with no paddles but with a sport shift mode accessed by moving the console-mounted lever to the left. Why bother? The Cascada has its shift schedule down like a Sunday golf time.
The small-displacement turbo four moves the Cascada off the line just fine, but with a couple of adults present, it strains before it hits a performance wall. It feels like a classic eight-second 0-60 mph car--perfectly in tune with its compact dimensions--but could be a GTI were it not for a needle-pegging curb weight of 3,979 pounds. That's about 500 pounds heavier than a Chevy Cruze Diesel, heavier even than a V-6-powered Buick LaCrosse.

Despite all that thickness, the Cascada's fuel economy is rated at 20/27 mpg.

The weight hampers acceleration, but it helps smother road flaws, giving the Cascada a distinctly non-compact-car ride. It's smooth, especially for a small car riding on 20-inch wheels. The front struts have a more substantial design than most compacts, and the rear end's Watts Z-link suspension does the same next-level job it accomplishes in the Chevrolet Cruze and Buick Verano sedans.

Thanks to those big 20-inchers, the steering's not so quick, and it doesn't need to be. It'd ruin the unhurried, relaxed ambiance that makes the Cascada feel like a bigger, more substantial car than its compact roots might have produced.

Buick Cascada comfort, utility, and quality
The Cascada's performance is fine. Where it needs to excel is in the top-down driving experience.
That's where all the extra weight comes in. There's a purpose to it all. Convertibles can shake and shimmy if they aren’t stiffened with extra metal under the body and around the passenger space. The Cascada gains stiffer A-pillars and reinforced side sills to keep it from wiggling, and it works. There's almost no cowl shake--the feeling that the ends of the car are wagging like an excited Shih Tzu.
The Cascada's top moves out of the way, quickly, of a good time. It can drop its lid in 17 seconds, at speeds of up to 31 miles per hour, at the tug of a console-mounted switch. All four windows will raise or lower with a single switch, too--and with the top up, the Cascada's quiet enough to enjoy whatever music you're streaming.
The sunny-side-up driving is best savored by two people. The Cascada is a compact four-seater. In front, the leather-trimmed seats have swell bolsters that give away its European roots. They're power-adjustable, and the seat belts have power presenters so you don't have to go fumbling to look for them. Tall passengers will find the front seats sit fairly high but the seats are supportive for long drives.
The back seat is more modestly sized. Adults can fit back there, but they won't be happy for more than a half-hour or so. The space is narrow, the seats are low--the beltline meets most passengers' shoulders--but there’s a power-access feature that senses knee positions, and keeps the front seats from crushing the patellae of back-benchers.
At least the trunk has enough space for weekend trips: it’s 9.8 cubic feet when the top is down, and 13.4 feet with the top raised. And if you need more space, the rear seatbacks do fold forward for expanded access to the trunk, through a cat-carrier-sized cutout. 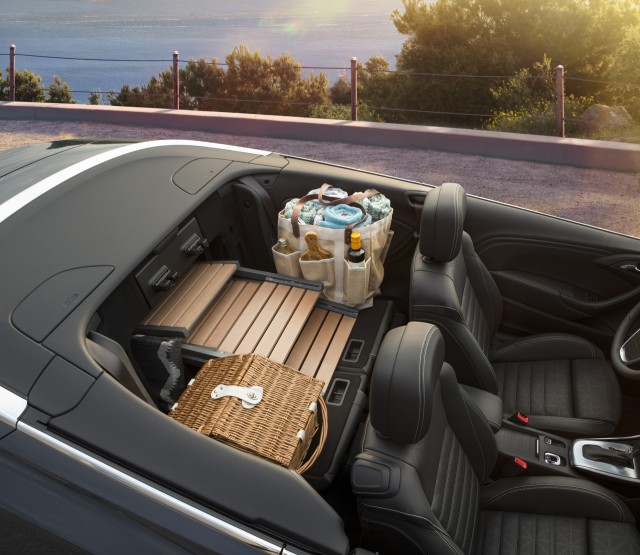 Buick Cascada safety and features
The Cascada hasn't been crash-tested, but it offers some of the latest safety technology, like a rearview camera, lane-departure warnings, and rear parking sensors. But it doesn't offer blind-spot monitors or adaptive cruise control or lane-keeping assist, or any of the features becoming de riguer on luxury and even premium brands.
A set of hidden roll bars pop up to protect passengers in case of a roll-over.

The Cascada has good outward vision, even with the top up. Its side mirrors are placed father back, behind small A-pillar mirrors, which likely aids aerodynamics but makes the mirrors a bit less useful.

On the connectivity front, an OnStar 4G LTE data connection with built-in wifi hotspot is standard in the Cascada. The Intellilink infotainment system gets a color touchscreen, text-message alerts, and Siri Eyes Free compatibility.

The infotainment system has a smaller (7.0-inch) and lower-resolution screen that's controlled also by a set of buttons and and a rocker switch/joystick. It's a fiddly system that's been superseded in other GM cars by a bigger, prettier touchscreen interface. It's another small sign that the Cascada is landing in America relatively late in life--and that sometimes the global parts bin runs dry.

Pricing for the Cascada starts from about $37,000 for the Premium version--in which Buick puts every available feature, including the advanced safety gear. Omitting that package drops the base price to just $33,990 including destination.
So what’s the bottom line with the 2016 Buick Cascada? With its measured performance, a very comfortable interior and a smooth ride, the Cascada is built for days when the best driving means the top is down.