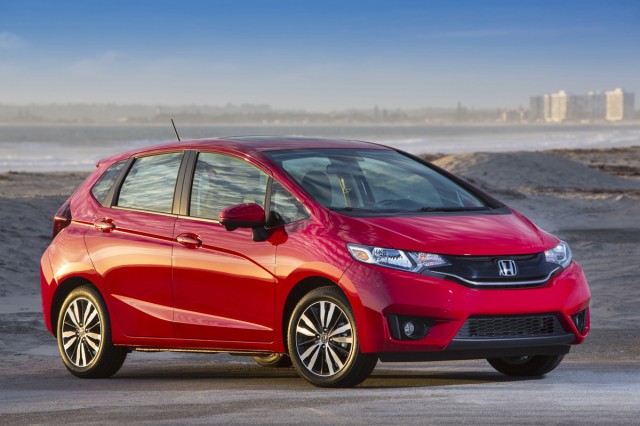 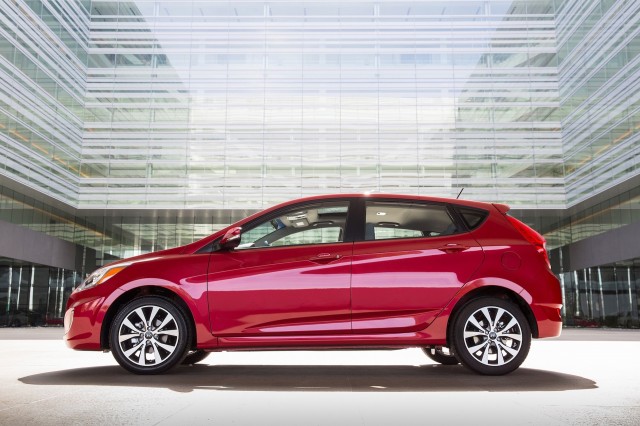 Both the Honda Fit and the Hyundai Accent are economy cars, but each has some distinct appeal for buyers. The question is, which one fits you best?

We rate one of them higher by a wide margin, but before we divulge the winner, some basics. Both are sold as hatchbacks, but the Fit doesn't also offer a sedan model—which the Accent does. The Fit was entirely redesigned for 2015, while the Accent has remained pretty much unchanged since its launch as a 2012 model.

In hatchback form, the Fit and the Accent are both tall five-door cars with body creases and other design tricks to hide their boxy, almost wagon-like shapes. The fresher Honda is more distinctive, whereas the Accent comes across as almost the generic small car. Inside, the Honda offers more equipment features and options, but both have interiors with respectable materials that are pleasant enough, if distinctively non-luxury.

The Honda Fit earns a 6.0 overall on our new scale. The Accent lags behind badly at 4.7 out of 10. (Read more about how we rate cars.)

The Honda's front seats are particularly comfortable for a car this size, and the Fit is capable of holding four adults in its surprisingly roomy passenger space. The Accent is a little less good on long trips, but the real win for Honda is the aptly named "Magic Seat" arrangement. The rear seats fold and flip to create a cargo area from the floor to the roof, while the front seats recline fully to create an almost-flat upholstered interior platform. The result is unparalleled flexibility that holds remarkable numbers of people and volumes of cargo. The littlest Honda wins hands-down for interior adaptability not only over the Accent, but over any other entry in its segment—and even a few larger compact cars to boot. The rear seats of both the hatchback and sedan Accents fold, but that's about it. 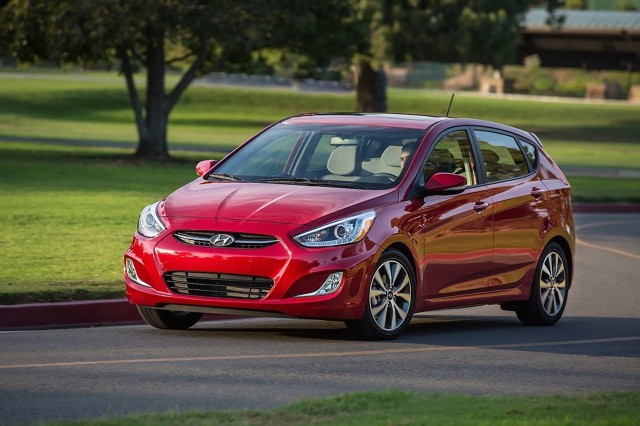 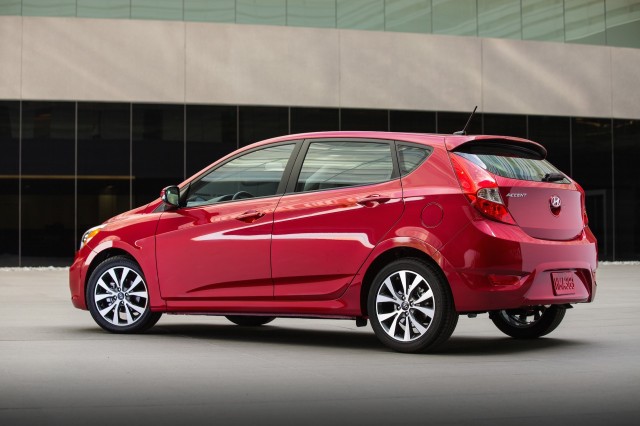 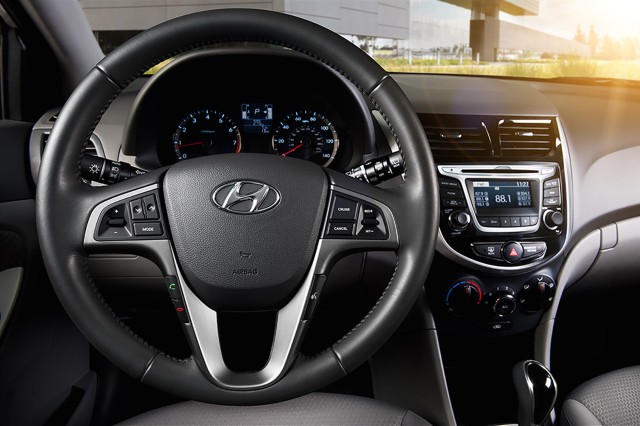 The Accent is powered by a 138-horsepower, 1.6-liter 4-cylinder engine, which matches best with the base 6-speed manual gearbox and its light clutch. Equipped with the more common 6-speed automatic transmission, it takes the Accent about 10 seconds to accelerate from zero to 60 miles per hour, which is slow. The automatic does offer a Sport mode and manual control, but to get the most out of its engine, it has to be revved high, above 3,500 rpm. Even so, it's taxed with more than two people aboard. Gas mileage is either 30 mpg combined with the automatic or 31 mpg combined with the 6-speed manual.

Similarly, the Honda Fit uses a 130-horsepower 1.5-liter 4-cylinder engine with a 6-speed manual gearbox as standard. However, most Fits will use a continuously variable transmission (CVT) that does far better on fuel efficiency than any Accent. The EPA rating of 33 mpg city, 41 highway, 36 combined vaults Honda to the head of its class for EPA ratings. It's done a decent job of making the CVT tolerable, and the Fit suppresses most exterior noise fairly well even at speeds well above any U.S. speed limit.

The Fit has earned very good safety scores from both the Insurance Institute for Highway Safety (IIHS), which dubs it a Top Safety Pick, and the National Highway Traffic Safety Administration (NHTSA). The NHTSA gives it five stars overall, and the Fit achieved Good ratings in all IIHS categories except the tough new small-overlap front crash tests, where it was rated "Acceptable." The Accent, on the other hand, doesn't rate very well with the NHTSA or the IIHS. It scores four stars with the federal government, which also adds some extra notes about concerns over its performance in side crashes. In IIHS testing, the Accent receives a score of "Poor" on the small-overlap test. 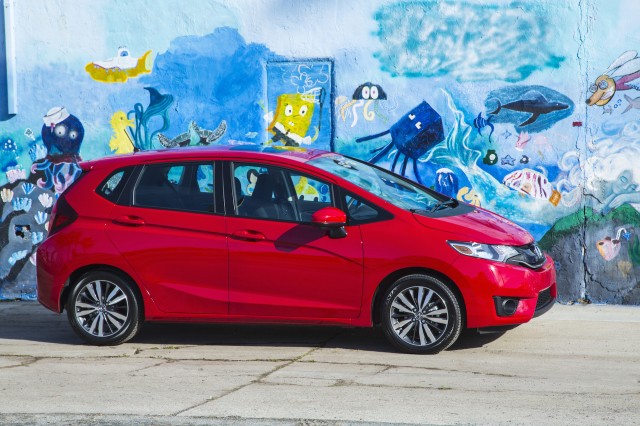 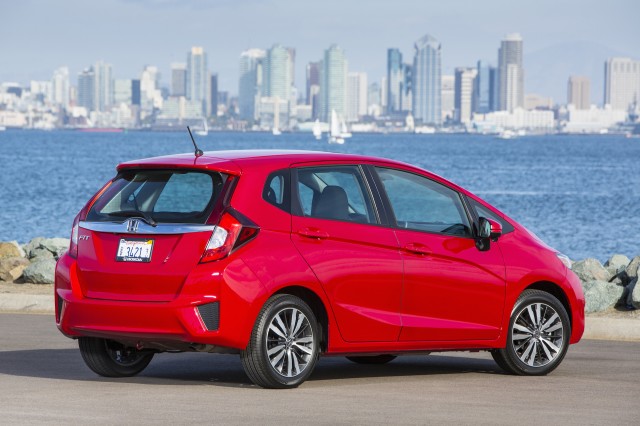 The 2017 Honda Fit encompasses four models and primary builds: a base Fit LX, a mid-range EX, and a premium EX-L. Keyless entry, cruise control, a rearview camera, and air conditioning are among many items now included even on the base LX, while mid-level EX models get keyless ignition, upgraded infotainment, and Honda's impressive LaneWatch wide-angle lane-change aid from the Accord. The Fit EX-L heaps on leather and more luxury, while its top-of-the-line EX-L With Navigation trim level gets a high-contrast system with live traffic data that's finally worth the premium.

The Accent is simpler, with just two trim levels: the standard Accent SE in hatchback and sedan versions, and the Accent Sport, which comes only as a hatch. Accents come with a decent level of standard equipment, but don't look for leather, a sunroof, or navigation on the options list. Base versions get power windows, locks, and mirrors, along with air conditioning, while better-equipped models add a tilt/telescoping wheel, cruise control, satellite radio, and Bluetooth pairing.

We recommend the Fit without hesitation. The Accent has an exceptional warranty for its class and operating costs or low, but its safety scores continue to give us pause.

5.0
Expert Rating
More conventional, but still a little weird, the Honda Fit won't have you doing double takes.
Read More
6.0
Expert Rating
The Accent has a distinctive look that owes much to the bigger Elantra.
Read More

Front Wheel Drive Read Full Specs
Front Wheel Drive Read Full Specs
Compare Free Dealer Price Quote
With competitive price quotes from multiple dealers, you will be prepared when you meet your local car dealer. Please tell us how to contact you so that dealers can compete for your business!
2017 Honda Fit
There are no Honda dealers in our network that are located near the ZIP code.
2017 Hyundai Accent
There are no Hyundai dealers in our network that are located near the ZIP code.
Thank you!
We have sent your request for price quotes on the 2017 Honda Fit and 2017 Hyundai Accent to the dealers you requested. They should be in touch shortly.
The Car Connection's dealer quote process is powered by our partner site CarsDirect.
Your request for a fast, free price quote on a 2017 Honda Fit and 2017 Hyundai Accent is in process. The CarsDirect Dealer(s) listed below will contact you shortly to discuss your request and to provide a quote. If you have questions now, you can contact the dealer(s) directly using the information provided below or contact CarsDirect's award-winning customer service team at 1.888.CarsDirect (1.888.227.7347) or [email protected]
For your reference, your customer transaction number is .
Tell us a little bit about yourself
Looking for dealers in your area...

*As configured. Excludes taxes, title, license and other customary fees, such as dealer documentation fees, tire and battery disposal fees and, where applicable, finance charges. By clicking on “Get Your Price Quote Now”, you agree to our Terms of Use (including the Supplemental Terms) and Privacy Policy. You further consent to being contacted at the number you provided by CarsDirect and certain participating automotive dealerships, which may include autodials, text messages, and/or pre-recorded calls; this consent is not a condition of purchase or service. Message and data rates may apply.
Have feedback about this experience?
Let us know.
Tags:
2017 Compare Cars Honda Fit News Honda News
2021
The Car Connection
See the winners »
2021
The Car Connection
See The Winner and Nominees »