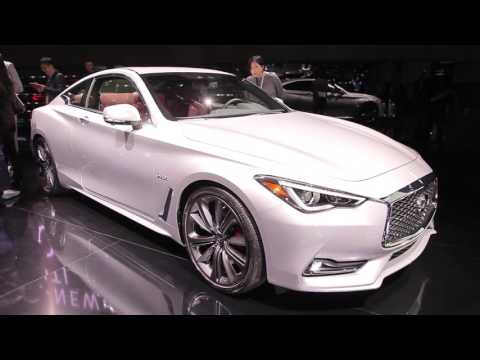 Just a few years ago here in Detroit, Infiniti unveiled the Q50 sedan--a stunning car with great road manners. Now, it’s time to follow it up with a coupe version.

The exterior of the new Q60 is instantly recognizable as it shares a lot of design cues with its four-door sibling, the Q50. The coupe gets interesting in the details. The Q60 has a low, wide stance and a dramatic C-pillar that reminds us of the Honda Accord Coupe. There's an odd nick above the center of the grille, but that aside, the Q60 represents a sexy overhaul of the last-generation coupe.

Inside the cabin, the layout will be familiar to anyone that’s been in the Q50 sedan. Trim ranges from aluminum and black wood to carbon-fiber, while some versions have a silver glass accent. Infiniti’s two-screen infotainment setup is front and center in the dashboard, and a new 13-speaker Bose Performance Series sound system will be onboard.

A new twin-turbo 3.0-liter V-6 engine with either 300 horsepower or 400 horsepower sits under the hood. A new entry-level offering is a 2.0-liter turbo four with 208 horsepower. Power is sent to the rear wheels through a seven-speed automatic transmission. Notably, all-wheel drive is on the options list.

The Q60 will also be available with the second generation of Infiniti’s Direct Adaptive Steering, or “steer-by-wire” system, on V-6 models. While this system received poor reviews in the Q50, Infiniti’s saying it’s been completely retuned for the Q60 to offer more steering feel and feedback.

While Infiniti’s being quiet when it comes to pricing, the new 2017 Q60 is scheduled to go on sale later this summer.