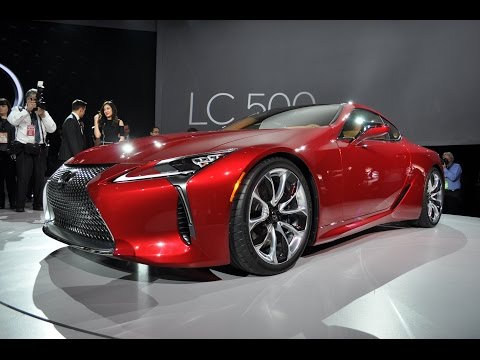 Jaguar has the F-Type, Mercedes has the AMG GT. A truly great sports car is a must-have for any luxury car brand.

Lexus agrees--and it's aiming for greatness with its stunning new 2018 LC 500.

Remember the LF-LC concept car from four years ago? The LC 500 is that car, made ready for the streets.

Lexus kept the concept car’s styling almost intact. With a long, low hood, short overhangs, and the biggest spindle grille you've ever seen, the LC is sharp, and striking. It's not perfect--but it's unlike anything else on the road.

Inside, the LC 500 has a wrap-around dash dominated by a new Lexus infotainment system. And like the Jaguar F-Type, there's a not so subtle divider between the driver and the front passenger. Scooped-out sport seats get a choice of leather or Alcantara, and magnesium shift paddles peek out from behind the steering wheel.

What about power? Yes, the LC has some. A lot, in fact. Lexus stuffed its high-revving 5.0-liter V-8 from the RC F and GS F under the hood of the LC 500. That naturally-aspirated V-8 should drop about 467 horsepower to the rear wheels through a new 10-speed automatic transmission. There's no manual gearbox, but there is a dual-mode exhaust and big 20- or 21-inch wheels. Lexus promises a 0-60 mph time of 4.5 seconds.

The LC 500 is actually a four-seater--but that back seat looks small, doesn't it? It's built on a new rear-wheel-drive luxury platform, one that will spawn a new LS sedan soon.

In the LC, the engine is mounted behind the front axles for better weight distribution. The body's also made up of a lighter-weight mix of materials--there's some aluminum, some steel, even some carbon fiber.

Lots of details are yet to come, since the Lexus LC doesn't even go into production until early next year. Look for it about a year from now, wearing a 2018 model-year tag.