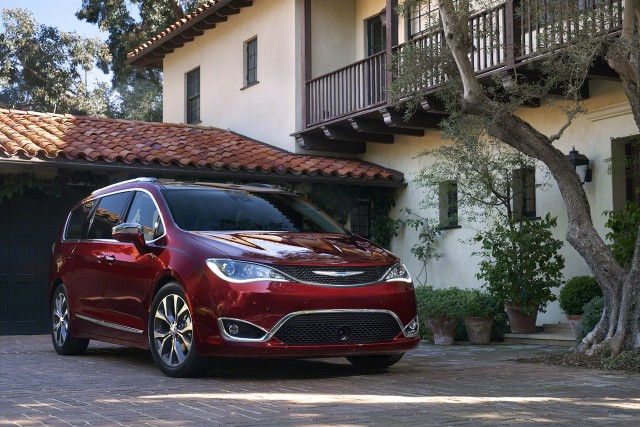 Chrysler pioneered the minivan, and it still sells the most flexible, utility-minded vans on the road today. But for 2017, it's reinventing its minivans, with a more luxurious and more efficient driving experience in mind.

Here's a first look at the 2017 Chrysler Pacifica.

You'll remember the Pacifica name from the mid-2000s, when it was a wagon-bodied minivan derivative. Now it's the replacement for the Town & Country, and the first Chrysler built on a new architecture.

The shape breaks from the boring big-box Chrysler minivans of today. It's a pretty, flowing look with a dramatically angled rear pillar and a front end like the one on the mid-size Chrysler 200 sedan. The interior's much richer-looking than today's minivans, too.

Chrysler's preserved the fold-away second- and third-row seating in the new Pacifica. A new feature triggers the seats to fold away with the touch of a single button, and there's also a tilt-away feature for better third-row access.

Fuel economy plays a big part in the new Pacifica. It will be Chrysler's first plug-in hybrid. The new drivetrain combines a 3.6-liter V-6 with a two-motor hybrid system that acts as the transmission. A lithium-ion battery pack allows the Pacifica to go up to 30 miles on electric power.

Other Pacificas will run on the V-6 engine alone. It's rated at 287 horsepower, and will come with a nine-speed automatic transmission for an estimated 28 miles per gallon highway.

On the tech side, the Pacifica gets a new infotainment system, hands-free sliding side doors and tailgate, surround-view cameras, and an in-car vacuum.

Pricing hasn't been announced, but the standard Pacifica goes on sale in the spring, while the Hybrid arrives in the second half of 2016.