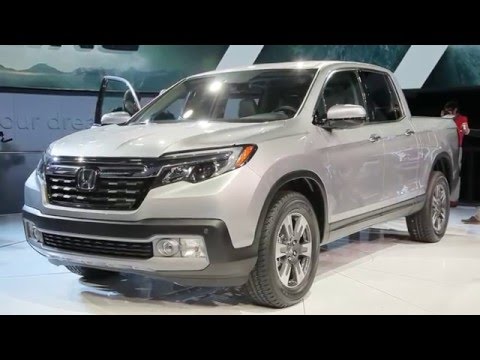 The first Honda Ridgeline was a tweener pickup truck--not a compact, and definitely not a full-sizer.

It also wasn't a big sales hit, but Honda's hoping to change that the second time around with the new 2017 Ridgeline.

Back after a two-year hiatus, the Ridgeline gets tougher and more trucky as Honda tries to get in the game alongside the Tacoma, Colorado, and Canyon. The new Ridgeline loses the weird styling of the first-generation truck--Honda's even stamped the body sides with cutlines so it looks like the unibody pickup has a separate cab and bed.

That pickup bed is now five feet wide, more than five feet long, and is 48 inches wide between the wheel wells--so it can haul sheets of drywall or plywood. It hasn't lost its trick features either--it still has the under-bed storage and the dual-action tailgate. The bed also gets a 400-watt AC inverter, eight tie-down cleats, and an in-bed audio system.

Towing figures aren't out, but Honda says the Ridgeline can haul up to 1,600 pounds of payload--just a bit more than the best Chevy Colorado.

For power, the Ridgeline gets Honda's 3.5-liter V-6 and an automatic transmission, but power and fuel economy numbers haven't been released. This time, Honda will sell a front-drive Ridgeline, as well as an all-wheel drive model with traction-control modes. Both models have a fully independent suspension, for a smooth ride.

There's no word on pricing, but the 2017 Ridgeline goes on sale by midyear.