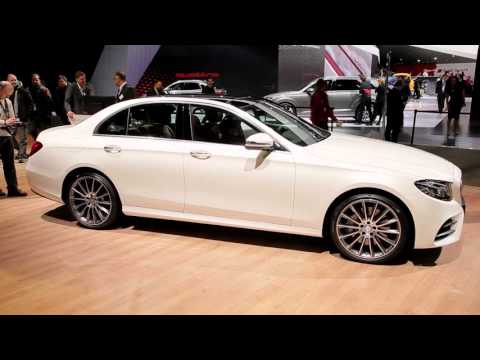 The latest S-Class and C-Class are some of the highest-rated cars at The Car Connection--so how can Mercedes-Benz top itself? With a new car that it calls its most intelligent yet.

The world got its first look at that car--the 2017 Mercedes-Benz E-Class--at the 2016 Detroit auto show.

The E-Class doesn't stray too far from Mercedes' latest designs. It's a classically handsome car with a long hood and a short trunk. There's a Luxury version with an upright star on the hood, or a Sport model with the star embedded in the grille.

The cabin? It's gorgeous, with a sweep of metallic trim punctuated by round vents, and wide high-resolution screens that make up the gauges and infotainment display. Both the steering wheel and the center console have touch-sensitive controls to run audio, phone, navigation, and more.

With the C-Class growing up, the E-Class has gotten bigger, too--it's 1.7 inches longer than before, and the wheelbase is up 2.6 inches.

So far, the only E-Class powertrain we know of is a 2.0-liter turbo four with 241 horsepower. It's teamed with a nine-speed automatic new to the Mercedes lineup. Rear-wheel drive is standard, and we expect an all-wheel-drive option to surface soon--along with turbodiesel, V-6, V-8, AMG, AMG Sport, and plug-in hybrid models, as well as a coupe, convertible, and wagon.

Adaptive dampers now are standard on the E-Class; there's also an optional air suspension with multi-stage springs that can offer better control and a smoother ride.

But the most important E-Class features pave the road to truly autonomous driving. The E-Class can now cruise, stop, and accelerate to follow the car ahead at speeds of up to 130 mph; it can steer itself into and out of lane changes; and it can apply the brakes when it senses danger in crossing traffic.

The E-Class also marks the debut of a new infotainment system, and of hardware that let it communicate with other cars in order to avoid accidents. Finally, E-Class drivers will be able--via a smartphone app--to park and fetch their car out of tight spaces without even getting into it.

Prices haven't been announced, but the new E-Class goes on sale in mid-2016.