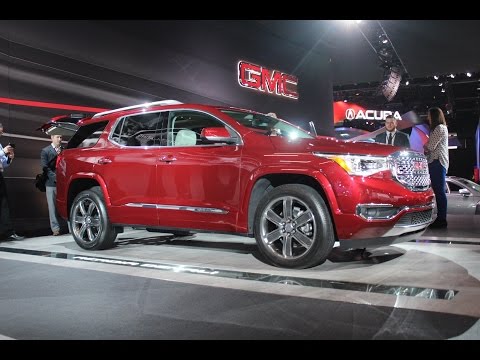 Big SUVs have helped the GMC brand to all-time sales highs. But does every SUV it sells have to be so big?

Apparently not. For 2017 GMC is downsizing the Acadia, to make it a better fit in the mid-size class that includes the Ford Explorer and Jeep Grand Cherokee.

The Acadia's shrinking down to mid-size proportions, and it's losing weight in the process. GM says it's dropped 700 pounds for the new model year, but a lot of that is simply from losing more than half a foot in length and in wheelbase.

The new Acadia is about seven inches shorter overall and more than six inches shorter between the wheels--which brings curb weight down under 4,000 pounds in the base, front-wheel-drive model.

There's still room for as many as seven passengers inside, though--the Acadia will be outfitted with either two or three rows of seats, with a sliding second-row seat just like today's compact Terrain crossover.

The rest of the weight loss comes from using a mix of steel and aluminum in the body--just like Cadillac does with its new 2017 Cadillac XT5 crossover SUV, which shares some running gear with the new Acadia.

A lighter body means the Acadia can adopt a new base four-cylinder engine--a 194-horsepower 2.5-liter four. There's still an available V-6, and it's up to 310 horsepower this year. Both engines are coupled to a six-speed automatic, with front- or all-wheel drive.

Technology and safety get big upgrades in the new Acadia. Forward-collision warnings with automatic braking make an appearance; so do on-board 4G LTE data services, a camera that helps with towing, and Apple CarPlay and Android Auto.

Pricing hasn't been announced, but the Acadia goes on sale in the spring.