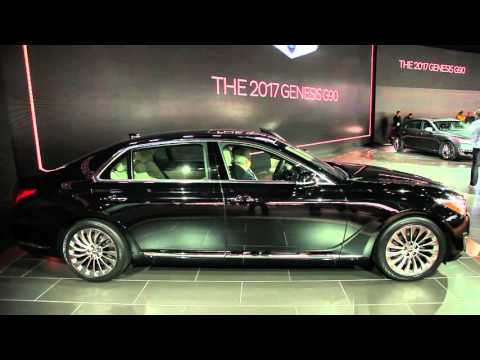 Hyundai already has a reputation for value--even with its current Genesis and Equus luxury sedans.

Now it's taking things a step further by elevating Genesis to become a luxury brand.

The G90 might be the successor to the Equus, but Hyundai has bigger dreams for it--it wants it to be a true rival for the S-Class and 7-Series, and to look like one. So it's come up with a spare, elegant design. The G90 has a tall, high grille, lots of LED lighting front and rear, and light touches of chrome.

Inside, the cockpit has a horizontal theme, with stitched leather and wood brightened up by metallic trim--and by a big 12.3-inch display.

To challenge those German sedans properly, the G90 gets a pair of strong engines -- either a 365-horsepower twin-turbo V-6, or a 420-horsepower V-8. Both are teamed to an eight-speed automatic.

Rear-wheel drive is the standard configuration, but the G90 offers all-wheel drive that can shift almost half its power to the front wheels for better traction. Along with electric power steering and adaptive dampers, the G90's entire suite of ride and handling features can be adjusted by the driver for comfort, economy, or performance.

Big power is a must, and the G90 is just plain big. The wheelbase is 4.5 inches longer than before; it's about the size of the latest S-Class sedan. And the accommodations are worthy: front seats can adjust up to 22 ways, and the back seats, up to 12 ways. The back seat can also be fitted with its own infotainment controller and twin iPad-size screens.

There's no crash-test data yet, but the G90 comes with forward-collision alerts and automatic braking; blind-spot monitors; and surround-view cameras. A head-up display is available.

And on the list of luxury trimmings, the G90 adds an infotainment system with handwriting input; ambient lighting; wireless device charging; and a 17-speaker Lexicon audio system with digital sound processing.

Pricing hasn't been announced, but the G90 goes on sale later in 2016.