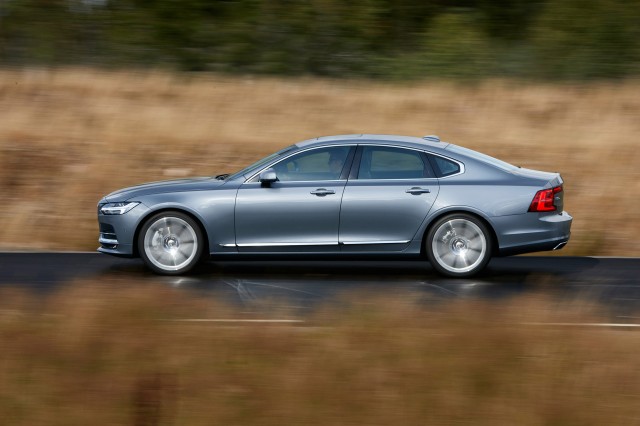 Volvo is prepping for big change. The XC90 crossover SUV is its first all-new vehicle in a decade--and there are more cars and crossovers to come.

Next up: a brand-new S90 luxury sedan with lots of the XC90's goodness inside.

The S90 isn't just a replacement for the aged S80 four-door--it's intended to be a much more luxurious car, more of a rival for sport sedans like the Jaguar XF, Mercedes E-Class, and BMW 5-series.

To that end, the S90 gets sleek lines that remind us of Volvo's 2013 Concept Coupe. It's an imposing but not too muscular look with some of the same winning details from the XC90--like the SUV's bracketed taillamps and LED running lights shaped like Thor's hammer.

The stunning S90 cabin shares a lot with the XC90, including its hallmark Sensus interface. Sensus dominates the center stack, but there's also plenty of leather, wood, and satin-metallic trim inside the S90.

The S90 will launch with a plug-in hybrid, a powertrain found in the XC90. In the S90 T8, it combines a supercharged and turbocharged 2.0-liter four and an electric drive system for a net of about 410 horsepower.

Volvo's making the S90 a tech tour de force. That includes equipping it with its latest version of Pilot Assist, a semi-autonomous driving feature that offers stop-and-go and follow capability not just in traffic jams, but at speeds of up to 80 miles per hour.

There's no word yet on final drivetrain numbers or fuel economy, but Volvo says the S90 should show up in U.S. showrooms in summer 2016 with a base price in the mid-$40,000s.