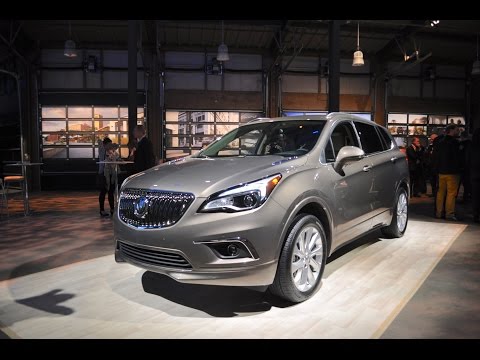 Buick has the teensy Encore and the broad-shouldered Enclave in its lineup--but it's missing a big-selling mid-size crossover SUV in its lineup.

Not anymore--say hello to my not so little friend, the new 2016 Buick Envision.

The Envision fits right in the middle of the Buick SUV lineup, as a rival for vehicles like the Audi Q5 and Lincoln MKC. It has a smart look that's not at all in the SUV tradition: there's a small vertically ribbed grille, lots of muscle in the front fenders, and LED details in the running lights and taillamps.

The Envision's cabin is where things get daring. It's a dramatic place to sit, with a sweep of controls wrapped around the driver, and big bands of woodgrain trim and ambient lighting everywhere else.

For power, the Envision leans on a 2.0-liter turbo four rated at 252 horsepower. It's teamed to a six-speed automatic. Front-wheel drive is the stock configuration, but a new twin-clutch all-wheel-drive system and an independent suspension are designed for carlike handling and a smooth ride.

The Envision has two rows of seats, for up to five passengers. It's a bit smaller than GM's current mid-size SUVs--the GMC Terrain and Chevy Equinox--but it shares one great feature with those vehicles. It's this--a sliding second-row seat for more flexibility with passengers and cargo.

Maybe the biggest news with the Envision is where it's built. When it goes on sale, it will be the first Chinese-built American car to be sold here in the U.S. How will shoppers react? That remains to be seen.

Buick's being quiet on pricing but we expect it to start from about $30,000 when it goes on sale later this summer.