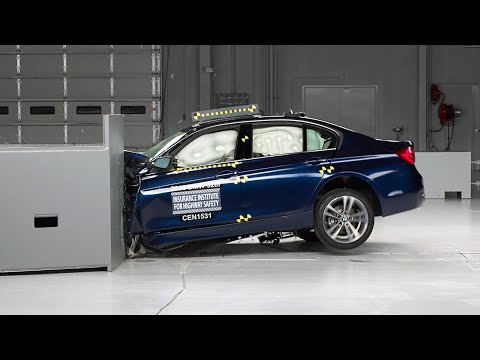 Luxury sport sedans like the BMW 3-Series may wrap in more safety-technology features than mainstream models the same size; yet you can’t necessarily count on better occupant safety.

That’s what a new set of crash-test results from the Insurance Institute for Highway Safety (IIHS) helps underscore. The 2016 BMW 3-Series only managed ‘marginal’ scores in the IIHS small overlap frontal category—corresponding to a higher chance of injury in such a crash.

In the IIHS test, which simulates what happens when the front corner of a vehicle collides with either another vehicle or an object such as a utility pole or tree, sends the vehicle into a five-foot-tall rigid barrier at 40 mph, lining up the vehicle so that the barrier is struck by 25 percent of the total width of the vehicle.

The test measures intrusion of the passenger cell, the effectiveness of the restraints, and several injury measures. In the case of the 2016 3-Series—tested in 328i form—the results pointed to a high likelihood of foot injury in such a crash. “The dummy’s right foot was trapped between the brake pedal and toepan, and the pedal had to be cut off to free the foot,” the organization reported.

These results improve somewhat on tests of a 2012 328i Sedan, although they’re not better enough to bring the overall score above the ‘marginal’ level.

CHECK OUT: How Do You Cross The Street In Front Of An Autonomous Car?

The 2016 BMW 3-Series, which received some significant refreshes this year, including new powertrain variants and revised front styling, manages top ‘good’ ratings from the IIHS in all the other dynamic crash tests, and it receives an ‘advanced’ rating in front crash prevention, when equipped with the Driver Assistance Plus package and its Collision Warning with City Braking function. That package also adds a surround-view camera, blind spot monitor, lane departure warning, speed limit data, and an active collision mitigation system. And of course the 3-Series’ precise handling and capable, predictable handling are accident-avoiding assets in and of themselves.