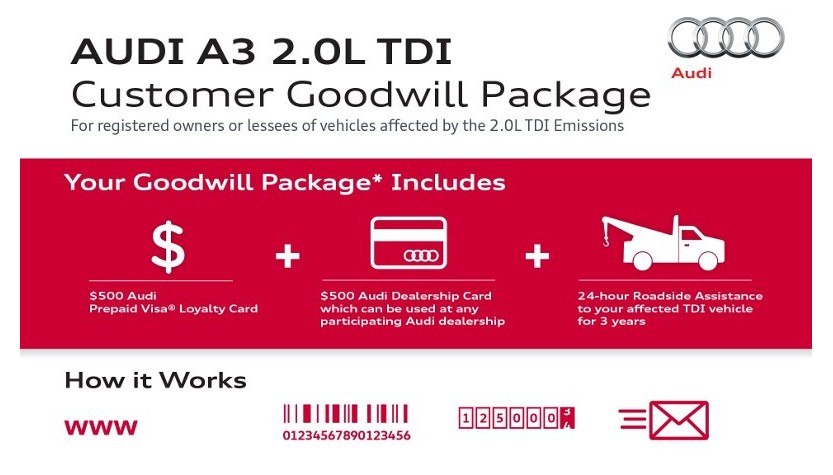 Unless you've paid close attention to the Volkswagen "Dieselgate" headlines, you might've missed the fact that Audi vehicles are also installed with emissions-test-cheating software. The fact that Volkswagen's popular, mass-market brand at the center of the scandal shares a name with its parent company has obscured the fact that other Volkswagen nameplates -- particularly Audi, Porsche, Seat, and Skoda -- are affected by Dieselgate, too.

Last week, as many Americans turned their attention to Thanksgiving preparations, Audi rolled out a plan to make things right with owners -- though whether it'll have the desired effect is a matter for debate.

The plan is called the Audi Customer Goodwill Package, which is a copy-and-paste of VW's "TDI Goodwill Program" launched earlier this month. (Though Audi had announced the Goodwill program a few days after the TDI program debuted, it appears that Audi officially launched the website last week.)

Enrolling in the program is a fairly simple process:

For now, Audi's Goodwill program is focused exclusively on the 2.0-liter Audi A3. However, Audi has admitted that 3.0-liter A6, A7, A8, Q5, and Q7 vehicles from the 2009 to 2016 model years are also equipped with illegal emissions software. It's unclear whether Audi plans to extend the Goodwill program to those owners.

If you're one of them, please share your own thoughts in the comments below. And be sure to check out more reports on Audi's Dieselgate fixes at Green Car Reports and Motor Authority.