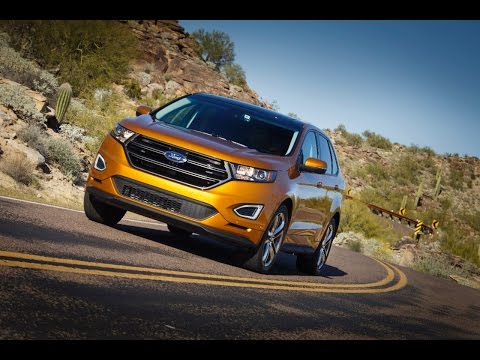 But what about the Ford Edge? Ford's mid-size crossover SUV has been a good performer and a strong seller, but it's gone about it all in stealth mode.

Will that change with a new generation?

Ford calls the styling of this new Edge more athletic, and we agree. Some of these design cues have been lifted from the Fusion sedan, and this shoulder line wouldn’t be out of place on a BMW. In some ways, it looks more like a premium sport wagon than a crossover SUV. But it's still far more subdued than crossovers like the Nissan Murano.

The cabin's even better at copying the best of Ford's cars. The new Edge goes far and beyond the previous version, with an interior that's styled and trimmed out to near-luxury standards. It's covered in soft-touch materials, and it's much more functional, too. Ford's dumped the swipe controls that adjusted volume and fan speed, and replaced them with knobs and buttons--as it should be.

The new five-seat Edge scores for space, but could use a little work on comfort. The front seating position is great, but pay attention when you buy--the seats aren’t cushioned as well on the less expensive models, and their bottom cushions are just too short. This Sport model has somewhat better-bolstered sport seats.

In back, the second-row bench is flat and rather hard, but at least its headrests are adjustable. On the Edge Titanium model, there's less headroom for rear seat passengers, thanks to the thick panoramic roof.

Performance is where the Edge makes its biggest leap forward. It shares some running gear with the Fusion sedan, and its powertrains are some of Ford's newest, and best.

Power goes to the front wheels, unless it goes to all four wheels. A smooth-shifting six-speed automatic is the only gearbox, but at least it comes with paddle shift controls.

Fuel economy nudges forward in the new Edge. The EPA says it'll reach 30 miles per gallon in its most efficient configuration--with the 2.0-liter turbo and front-wheel drive.

Behind the wheel, the Edge is remarkably smooth, especially with the 2.7-liter turbo six. It burbles with an off-cadence purr that reminds us of a five-cylinder--in the best way possible.

The six-speed performs perfectly. You think you need eight or nine gears? You don’t. The steering skips the adjustable weight settings, though some models get a variable-ratio setup that helps the chunky Edge slide into parking spots more easily. All told, the Edge's road manners are some of the best in its class, just like its Fusion sedan cousin.

The Edge has fared well in safety, with top scores in almost every crash test to date. Bluetooth and rearview camera are standard, and active safety tech such as adaptive cruise control, forward-collision warnings, and parking assist are available.

Starting from about $28,000 the Edge comes equipped with cruise control, air conditioning, the Sync smartphone connectivity system, and power features. A heavily equipped model like our $45,000 Sport can have navigation, voice commands, heated front and rear seats, and a 180-degree front-end camera.

So what’s the bottom line with the 2015 Ford Edge? If you don’t need third-row seating or a luxury badge, the 2015 Edge is everything you need in a stylish, tech-savvy crossover SUV.