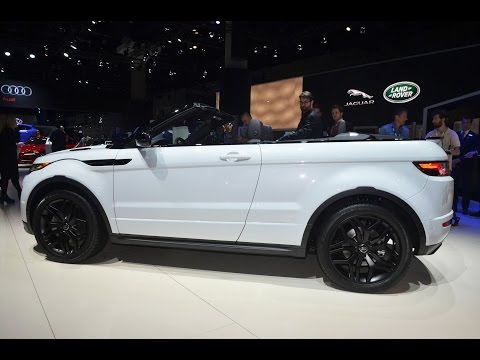 So, you want to go off-roading in a convertible SUV. There's always the Jeep Wrangler. But the Nissan Murano CrossCabriolet is gone, may it rest in peace.

Well, now, there's another way to throw caution to the wind.

Well, they did it. Land Rover showed us a Range Rover Evoque Convertible concept back in 2012. And now it's headed to showrooms, as wacky as that sounds.

Top down or top up, the Evoque Convertible manages to maintain the edgy lines of the standard Evoque. But it wasn't easy. To help keep those lines clean, new frameless doors had to be developed.

The roof is a power-operated fabric unit that folds away flush into the rear bodywork in under 20 seconds.

Inside the cabin is identical to what you'll find in the standard Evoque. However, in back there's a pair of fixed seats separated by a central divider--no squeezing in a fifth passenger. It's a tight fit back there--small children will be the only living things going back there voluntarily.

Whether the roof's up or down the Convertible preserves 8.9 cubic feet of cargo space. A ski hatch allows longer items to be carried.

Powering the Range Rover Evoque Convertible is a 2.0-liter turbo four rated at 240 horsepower and 250 pound-feet of torque. It's paired with a nine-speed automatic transmission that sends power to all four wheels.

Pricing and fuel economy haven't been announced but the new 2017 Range Rover Evoque Convertible will go on sale next summer.