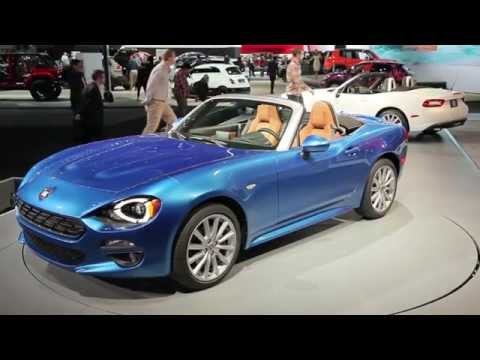 It's been five years since Fiat returned to the U.S., here, at the Los Angeles Auto Show, but it feels like forever since they've sold a classic Italian convertible here. Now, after 50 years, it's time.

Recognize this? Don't call it a Miata. While it's based on the new MX-5, the Fiat 124 Spider's body doesn't share a single piece of sheetmetal with its Japanese cousin. It's a bit longer than the Miata, too. The front end wears a completely new look, with LED daytime running lights around the headlights, while the rear has angled taillights with body-colored accents within the lenses.

Inside, well, it's a nicer Miata. The cabin's better finished than the Japanese roadster with upgraded seats, nicer materials, and different door panels. The gauge cluster, infotainment screen, and controls are all straight from the Miata, but that's not necessarily a bad thing. Another interesting bit is the trunk is larger than the Miata's, by just a little bit, and it's better trimmed as well.

Under the hood the Spider is its own car, too. It gets power from the Fiat 500 Abarth's 1.4-liter turbo four pushing out 160 horsepower. Power is sent to the rear wheels through either a six-speed manual or six-speed automatic. If you #GiveAShift just keep in mind you can only get the manual in the base Classico trim.

It might be a sports car but Fiat has paid attention to safety with available active safety tech. The list includes a rearview camera, blind-spot monitors, and the standard array of airbags and electronic stability control.

Both pricing and fuel economy will be announced in a few months, closer to the Fiat 124 Spider's on-sale date of next summer.