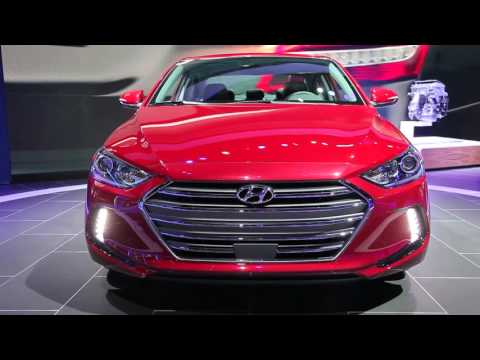 Is less really more? Hyundai's out to prove the adage with a new sedan that trades some of its famous flourishes for other priorities.

The new 2017 Hyundai Elantra represents a big departure from today's model. The body's lost most of the dramatic curves of the outgoing model, in favor of a much simpler, cleaner design.

Inside, the old hourglass-shaped console is gone, replaced by a simple hooded binnacle and a big touchscreen, with a few round knobs and a handful of keys laid out neatly among soft-touch plastic and metallic trim.

The Elantra's firmly a mid-size car now, like the Honda Civic. It's grown by an inch in length and in width. Interior space has made small gains. The Elantra remains a much bigger car, especially in rear-seat room, than rivals like the Focus and Mazda 3.

With a stiffer and lighter body, Hyundai's aiming for a quieter, more compliant ride and better steering feel. But it's putting fuel economy even higher on the priority list, with two new turbocharged four-cylinders leading the way.

The smaller one is a 1.4-liter turbo four, with 128 horsepower; teamed to a seven-speed dual-clutch transmission, it could deliver 35 miles per gallon on the EPA combined cycle. That would tie the Honda Civic, with its four-cylinder/CVT drivetrains.

Most Elantras will come with a 2.0-liter four, a conventional six-speed automatic, and EPA highway ratings of up to 38 miles per gallon. Gas mileage also gets some help from smoother aerodynamics, and driver-selectable modes that range from Eco to Normal to Sport for drivetrain and steering tuning.

Hyundai wants nothing less than the best safety scores from the IIHS and the NHTSA, so the Elantra gets seven airbags. A rearview camera is available; options include forward-collision warnings with automatic braking; adaptive cruise control; and blind-spot monitors.

Pricing hasn't been announced, but the Elantra goes on sale soon. Stay tuned in January for our first drive.