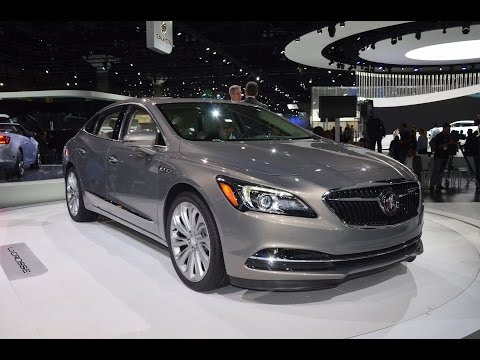 Buick generated some buzz with its Avenir Concept earlier this year, and now it's putting some of that concept's style into production.

Lower, longer, wider, and lighter. That's the new LaCrosse. The face now wears the a grille cribbed from the Avenir concept, and marks the return of the tri-color Buick badge. The roofline's been extended, giving the LaCrosse almost rear-wheel-drive proportions. Also like the Avenir Concept, Buick has even incorporated the character line from the rear fenders into the headlights and taillights using LEDs.

The LaCrosse has a new cabin theme, too, like the one in the Avenir, with a wide, sweeping dashboard, soft-touch material and French stitching on the seats.

The new LaCrosse ups its tech game with an eight-inch touchscreen infotainment system with real hard buttons for essential functions, an eight-inch screen in the gauge cluster, and an electronic gear selector like the one you'll find in a current BMW.

Powering the new LaCrosse is a more powerful 3.6-liter V-6 with an estimated 305 horsepower. An eight-speed automatic transmission--a first for Buick--sends power to the front wheels, though a new twin-clutch all-wheel-drive system is on the options list. It can send power fore and aft, along with side-to-side in the rear, for better torque distribution and better handling.

The LaCrosse has hit the gym and lost some weight to the tune of about 300 pounds, meaning it should be quicker and more agile than the outgoing car. Not only will it be quicker, but it should handle better too thanks to both that weight loss and a five-link rear suspension with available adaptive dampers. While 18-inch wheels are standard, 20-inchers will be available.

For 2017 the LaCrosse also boosts its safety gear with an array of new technology, from a head-up display, to automatic parking assist, to forward-collision warnings with automatic braking.

Pricing hasn't been announced yet, but the 2017 Buick LaCrosse goes on sale in the summer of 2016.