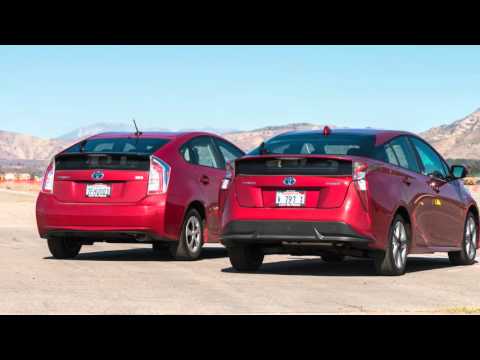 It's now in its fourth generation, and the Toyota Prius continues to be the world's definitive hybrid-electric vehicle.

This latest 2016 Prius gets slightly better gas mileage than before--52 miles per gallon for the base model--to keep its crown as the most fuel-efficient vehicle without a plug sold in the U.S.

But with electric cars getting all the high-tech love and public attention, is the latest Prius good enough to keep buyers coming in for fuel economy alone? We found out this week during our first drive of the 2016 Toyota Prius.

Way back in 2000, the first Prius was an oddity that launched to low expectations. The second generation arrived just as gas prices spiked in 2004. Once Hollywood adopted it as a symbol of green conscience, sales grew steadily.

The car we drove replaces the third Prius, launched for 2010, and it's sleeker, better-equipped, and considerably less grim to drive.

It still features Toyota's Hybrid Synergy Drive, in which a pair of electric motors assists a small engine. It captures otherwise wasted energy to charge a battery pack, and can power the car alone under gentle acceleration at low speeds.

The 2016 Prius stays true to the original concept, but Toyota promised it would have a more engaging driving experience with better, sportier roadholding. Has the company delivered?

The new Prius looks less slab-sided than the last one. It's still a five-door hatchback, but now it has a lower nose, a floating roof (courtesy of the black-painted pillars), and a rear end ... well, let's say it's not to everyone's taste. Parts of the design are sufficiently polarizing that the new Prius pulls off the unusual trick of making the previous car look sedate.

Inside, the dash is more coherent and has larger color displays with better graphics--though the centrally placed instruments still give it a bit of the spaceship-command look.

Still, it's fuel economy that the new Prius is built to deliver. All but one model are rated at 52 miles per gallon combined; the Prius Two Eco comes in at 56 mpg combined.

The powertrain is an updated version of the familiar layout, with an all-new 1.8-liter four-cylinder engine powering the front wheels through the latest Hybrid Synergy Drive system. Acceleration is about the same as the old car.

On the road, it drives a lot more like a regular car and a lot less Prius-like. And that's a good thing. The driver sits more than 2 inches lower this year, in a much more rigid body structure with a sportier trailing-arm rear suspension.

No one will buy a Prius for sports-sedan handling, but this version feels far more normal behind the wheel, with confident roadholding and decent steering. It's no longer numb, remote, and appliance-like--and that's a huge advance.

It's also quieter inside. The engine is still obvious under full acceleration, but it's better muted--and it no longer has a desperate, strained howl. For interior space, the new Prius isn't hugely different to the old one. But the materials are better-looking, and with far less hard plastic, it feels much less punitive. It can carry four adults in comfort, or five if they're tightly packed.

The 2016 Toyota Prius hasn't been crash-tested yet, but we expect it to do well. A full suite of Toyota Safety Sense active-safety aids are available.

Prices for the Prius start at $25,025 including delivery.

So what's the bottom line with the 2016 Toyota Prius?

It gets pretty similar gas mileage, but it's nicer, quieter, more comfortable--and it could attract more buyers due to its much more conventional driving experience.